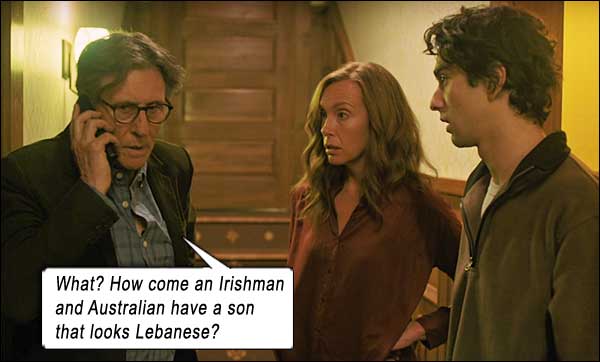 HEREDITARY inherits its DNA from THE EXORCIST and THE OMEN. Writer-director Ari Aster’s feature film debut is a brutal masterpiece, drenched in dread, an eerie thriller about a fractured family that ends in a different genre altogether.

Movie’s opening scene is a study in creativity: camera pushes in on a room filled with paraphernalia, then focuses on a doll’s house with its front wall open, slowly pushing in to one of the rooms, which, unexpectedly and imperceptibly – becomes real: A man walks into the room and wakes the figure we notice sleeping on the bed. His first film, his first scene, Aster is flaunting his cool right outa the gate. (At this point, having seen his first two feature films, we can verify his opening impressiveness was not a fluke! Both HEREDITARY and his followup, MIDSOMMAR, are shot through with this same level of roaring creativity.)

Toni Collette is Annie, whose mother has just died. She tells husband Steve (Gabriel Byrne) that she is “going to the movies” and secretly visits group therapy sessions, where she confesses she was never close to her mother, yet there was never closure, her mother diagnosed with DID (Dissociative Identity Disorder); her uncle and brother also had schizophrenic natures. So there are demons flying about in Annie’s head long before the real ones come calling… 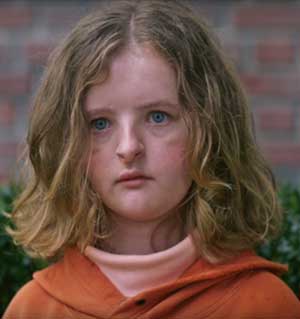 CASTING CALL. SEEKING: Daughter 18yo to play 13yo, introvert, socially inept, cuts the heads off dead birds with scissors. Must be one weird-lookin’ mamajama.

Steve and their teen son Peter (Alex Wolff) are not inordinately affected by Granny’s death, but their 13-year-old daughter Charlie (Milly Shapiro) is disturbed that “no one will take care of her” now that doting Granny is gone. Charlie is pretty disturbing herself, introverted, scruffy, seeing visions of Granny beckoning from across the schoolyard—wait whaaat?? When the teacher busts her not doing her work in class, a bird outside hits the window (in a scene effective for its subtlety) and everyone in the classroom jumps and yelps in surprise – except Charlie, stone-faced. Outside, Charlie finds the bird, uses scissors to cut off its head, and attach it to a toy of hers…

You think this is disturbing? Wait a few minutes.

Peter, who is at that age where the pull of pussy is stronger than any known force in the universe except gravity, wants to borrow the car to attend a party where the girl of his lust will be abiding. Concerned mom Annie insists he take little sister Charlie. At the party, while Peter is making time with his potential cherry-popper, Charlie is eating a chocolate cake (it’s already established she has a nut allergy). When she starts going into anaphylactic shock, Peter makes a desperate drive for the hospital, Charlie in the back seat. She sticks her head out the window gasping for breath, clawing at her throat – 100 mph – a dead deer in the road – Peter swerves – a lamppost –

With a sickening THWAP!! Charlie’s head impacts the lamppost like meat and bone slammed against a wall. Which is what our simple skulls and brains are – just a bone covered in thin meat. Horrifying… as we see the head come away from the body…

And Annie thought her mother dying was a hard knock…

Here is where writer-director Aster comes into his own. Peter’s reaction, and the way it is filmed, is something we are not used to seeing in blockbuster or “Hollywood” movies. Skidded to a stop, his hands grip the wheel, his eyes staring forward; he cannot, will not, dare not believe what he suspects has happened to his sister. He tries to cast his gaze at the rearview mirror, but draws back. He sits staring ahead fearfully for minutes, before he decides… to drive back home… At this point, we have not seen anything of Charlie’s fate… In long shot, we see Peter pull into the driveway, exit the car – we are on tenterhooks, given no visuals of the back seat – up to his room, onto his bed, facing camera. Blank.

The next morning. A hard closeup of Peter’s face, blank, as we hear Annie and Steve distantly in other rooms, we hear Annie mentioning she is going out to pick up something, we hear the front door open and close… the next thing we hear is a guttural scream that will live with us forever…

And we are only halfway through this horrific journey.

All through the movie, the weirdness is a slow burn, Aster crafting his visuals to always convey some measure of foreboding. He loves his long shots – one steady camera, with all the characters in the frame far away, acting out their fates while we look on almost like intruders; no cuts, no inserts, just story. 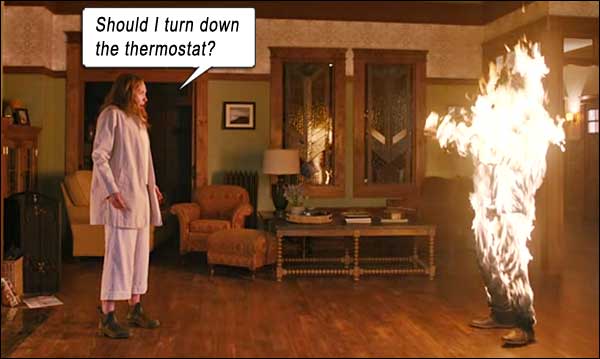 Steve gets a call that Granny’s grave has been desecrated; at a meeting, Annie meets Joan (Ann Dowd), to whom Annie opens up about her sleepwalking and how she once nearly immolated herself and her children with paint thinner; after Charlie’s death, Annie sleeps in Charlie’s treehouse instead of her marriage bed; Annie (who makes architectural models/dioramas for a living) creates a diorama of Charlie’s decapitation (which shocks husband Steve); guilt-ridden Peter starts hearing Charlie’s clicking tongue noises near him; what eventually tips the story into unbalanced is when Joan shows Annie how to conjure the spirits of the dead.

Colin Stetson’s jarring, scarring sound design is intended to disorient, to swerve us into unsure emotions, sometimes just cutting suddenly on a scene change (which in itself trips us into discomfort).

When the tale slants into demonic possession, Granny’s grand hereditary plan for the family is slowly revealed. So despite this introduction of magic-who-cares-fuck-you, Aster’s ingenious setups and payoffs create truly hair-raising moments, as Annie and Peter become subject to the whims of Joan’s cult, trying to conjure a demon named King Paimon into a male host, i.e. Peter. (We realize now why Granny always wished Charlie was a boy.) Just when we think things can’t get any more psychopathic, Annie discovers Granny’s headless body in her attic… 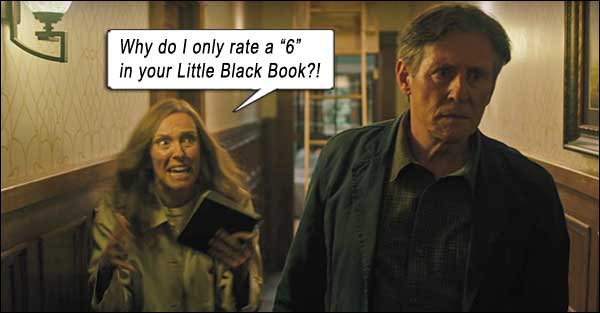 Stunning performances, with Toni Collette outstanding as a mother gradually tipping into madness; Byrne as her skeptical husband underplays brilliantly (one of his non-grammatical, disparaging lines toward her conjuring spell, “What language is even that?!”). Young Wolff is called upon to jump from emotion to emotion, the likes of which few humans have actually experienced (I mean, has your sister ever been decapitated? Have you ever been attacked by an invisible entity in class? Has your mother ever chased you into the attic and banged her head like a jackhammer on the door to be let in, while levitating?).

Throughout HEREDITARY’s descent into the occult, we marvel that despite the fact we’ve been suckered into a horror movie with a possession plot (an overdone trope in Hollywood), its atypical directorial choices elevate it above the engine-pit of B-stinkers. Yet for all his originality, Aster succumbs to the Hollywood trope of showing books on demonic rituals with convenient pictures – Horror Movie Shorthand For Dummies (subtitle: Picturebooks for Americans). Also, I find myself asking the obvious question that applies to ALL stories where a cult is summoning a demon into a chosen host: If the demon can already puppet its potential host to supernaturally see, do and say things before it has actually “possessed” them (and can make total strangers break the laws of physics to help its quest to possess the potential host – like levitate, walk around headless, start fires with their mind, telekinesis), then why does it even need to possess the host in the first place? To keep the paperwork in order?