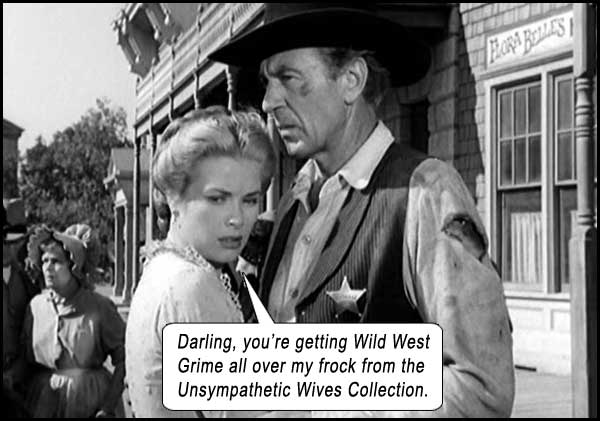 Man-Tales of the Old West.

HIGH NOON is about being a Man. Surrounded by wussies and pussies.

Gary Cooper is Marshall Will Kane, well-loved lawman of a small Western town, marrying his petite blond Quaker bride (Grace Kelly). At his new wife’s behest, he is leaving his tin star behind for a life of rousing inventorying in a General Store. The Mayor, in attendance, tells Kane, “We’re very good friends!” Royt…

10:30 a.m. News from the train station; Frank Miller is arriving on the noon train (and he’s bringing the Dark Knight with him). Miller (Ian MacDonald) and his gang (featuring a boy-young Lee Van Cleef) want Kane dead. Kane flees, wagon rattling, horses foaming, delicate bride at his side, drooling – that her man will be easily whipped for the duration of their sexless marriage, if the first act of that marriage is to turn tail and run. 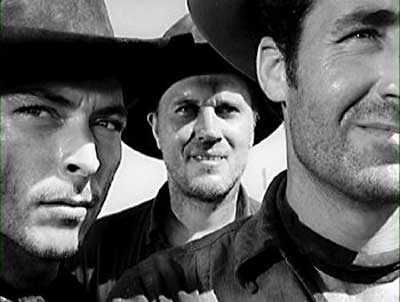 Bad too big for the small screen.

And then – Will Kane turns around.

He knows there is nowhere to run; that the fear must end this day. And against the protests of his puritanical, spineless wife (who wants him to run; who will only “stand by her man” as a runner, not a fighter; who wants him emasculated from the first day of their virginal betrothal) Will Kane turns that fleeing wagon back towards town. And every man in every audience since 1952 has stood and cheered. And if they didn’t, then they’d better.

Kane plans to swear in a posse of deputies and avoid trouble via strength in numbers. After all, the townspeople who just attended his wedding told him they loved him, right? First person to decline Kane’s petition is the “We’re-very-good-friends” Mayor. The song Do Not Forsake Me Oh My Darling starts the movie, and basically goes all the way through in different orchestral permutations; it would be a constant wink to the audience were the film not so engrossing with its nail-biting leanness. In quick succession, all those who professed to being Kane’s supporters, friends (Harry Morgan, Lon Chaney Jr.) and deputies (Lloyd Bridges) desert him. Kane is left to face the killers alone.

From a magazine story by John Cunningham, The Tin Star, screenwriter Carl Foreman and director Fred Zinneman bring HIGH NOON to the screen in tension-drenched real time. The movie’s 85 minutes start at 10:30 a.m. and end at noon. (Was this the first movie to attempt such a daring trick?) It’s one of those “westerns” that transcends being a Western and is more a study in humanity’s base self-preservation instincts and herd mentality.

Of all the characters that orbit Kane gutlessly, there is but one who is his equal in fortitude – sultry Mexican vixen Helen Ramirez (Katy Jurado, the Dorothy Lamour of the Old West, with eyelashes so luxuriant they cast shadows on her face!). She used to be Kane’s lover, and there is more heated chemistry between Kane and her than with his frigid fishwife. At one point, both Helen and Kane’s wife ride off in a carriage – the one who looks back is Helen. She knows she’s leaving probably the only real man in town. (As in GENTLEMAN’S AGREEMENT, the protagonist has a peripheral love interest far more suited to him than his actual wife, and for some reason, the wife suddenly arcs to understanding, with all of us rooting for the protagonist to end up with the Other Woman who understood him all along.) 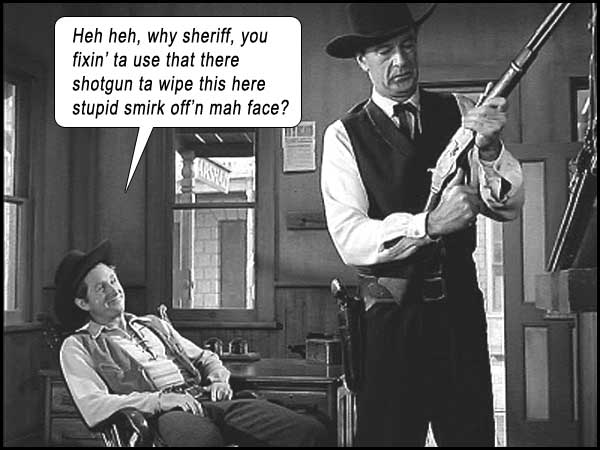 So lengthy is the buildup of Kane’s abandonment, and so high the stakes of facing the killers alone, that when the final battle comes, it is anti-climactic. Kane dispatches his assailants in stock, vintage western methodology. (Clint Eastwood would take his cues from HIGH NOON in HIGH PLAINS DRIFTER, punching up the terseness of the lead role and not making the same anti-climactic mistake for the final confrontation.)

Leaving town after the fracas, as his blond tail boards the wagon, glowing as if she was just taken roughly behind the barn (“That’s my man! I might not be able to p-whip him now, but he can whip me anytime!”), Kane rips off his tin star and throws it in the mud in disgust. Proving that only a Man who isn’t a pussy – will get some.