John Wayne didn’t like HIGH PLAINS DRIFTER and let me know it. He wrote me a letter putting it down, saying it was not The West. I was trying to get away from what he and Gary Cooper and others had done.
— Clint Eastwood. 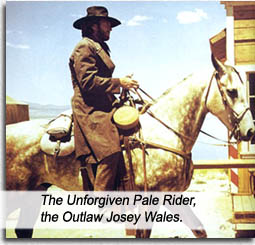 The Cucumber With No Name

Dee Barton’s ominous score heralds an angel of death materializing from the high desert haze: a Stranger (Clint Eastwood) rides from the blasted plains into the sun-soaked seaside town of Lago; steely-eyed, he clops slowly through the main street, townsfolk staring through the heat at him atop his dusty horse… The Stranger from Leone’s spaghettis – reincarnated to rewrite the American West.

Within ten minutes, this Stranger has had a beer, gunned down three men and raped a woman. Super cool. Super cruel.

HIGH PLAINS DRIFTER (written by Ernest Tidyman and Dean Riesner) has been called deconstructionist, formulaic, a dark study of the soul and a simple western… All of the above, and a scorching classic to boot. Clint Eastwood’s first true American “avenger” film, re-writing the book on the quintessential cowboy; no longer the singing fop or the John Wayne do-gooder; the cowboy was now a sociopath, a recluse, an “anti-hero.” 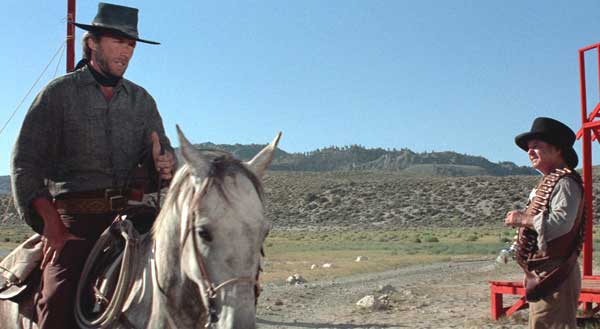 The second directorial effort by Eastwood (after PLAY MISTY FOR ME, 1971) is a revolution in film-making. We may well say “they just don’t make ‘em like that anymore” but the fact is: they didn’t even make ‘em like that back then! Note all the departures from Gene Autry/John Wayne convention: The Stranger is the star of this show, yet his horse is not white, but a dirty mottled appaloosa; he is unshaven, with a dusty longcoat (and he doesn’t get any cleaner), he speaks in a velvety rasp usually reserved for villains and movie trailer voiceovers, without unclenching his teeth, like he holds all and sundry in utmost contempt (which he does), he doesn’t wait for the “bad guys” to draw first (he’ll shoot ‘em in the back, or in the dark, or without warning – as long as he kills them); even his hat was not the usual “cowboy hat” with upturned sides, but flat-brimmed; and since when do “heroes” rape? (The movie industry is way too gutless to make rape scenes like this anymore – where the victim starts panting orgasmically halfway through the act; yes, it’s every man’s fantasy – though no one wants to admit it’s probably every woman’s fantasy as well.) The Stranger oozed “bad guy,” which is what he would have been in previous movies of this genre. Yet The Stranger is The Hero.

Though this movie is about a twisted kind of redemption, The Stranger didn’t have the mandatory “character arc” that defines every movie about redemption; instead, everyone around The Stranger arced, while he stayed the laconic, stone-hearted, anti-authoritarian maverick. This may be how the term “anti-hero” got coined: since it is taken for granted that every hero should have a defining arc and since The Stranger didn’t, maybe he was not the hero of the movie, even though we invested our emotions and aspirations in him. Not that anyone else was the hero. Maybe this movie didn’t have a hero! Who made the rules that every movie should? Hence: “anti” hero. (Almost every Eastwood movie featuring a character like The Stranger would boast the same absence of Hero Arc, from then to now.)

The Stranger displayed such calculated cool in gunning down the three bad men from the opening scene, that the sheriff (Walter Barnes, channeling Skipper from GILLIGAN’S ISLAND) begs him to become the town protector against three outlaws who hold a vendetta against the town and were on their way to Lago for revenge. In return for his protection, The Stranger would have free reign of the town and its resources. You don’t say!… 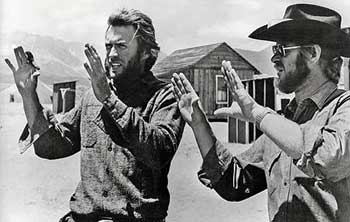 Clint Eastwood warns Geoffrey Lewis
on the dangers of miming.

The Stranger tears down people’s barns to make picnic tables, makes the town midget, Mordecai (Billy Curtis), the mayor and sheriff, gives free supplies to Native Americans, eventually forcing the townsfolk to paint all their buildings red and rename the town “Hell” – until we realize The Stranger himself is exacting some kind of revenge on the townsfolk.

In the town’s dark past, these townsfolk stood by and watched as their Marshal, Jim Duncan (Clint’s actual stand-in, Buddy van Horn), was whipped to death by the three outlaws. Was it coincidence that The Stranger breezed into town at exactly the moment that the outlaws would return?

By movie’s end… NONE of these questions are answered!

Mordecai: “What did you say your name was again?”
The Stranger: “I didn’t.”

Before we can speculate on whether The Stranger is Marshal Jim Duncan’s brother, or an avenging spirit, or Jim Duncan himself, he has faded like a wraith back into the high plains haze from whence he came…. as The Man With No Name is solidified in American Western culture more than Leone could ever have imagined…