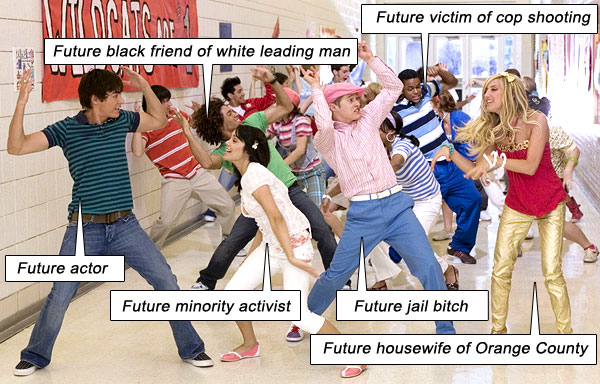 There are three words to describe the songs in HIGH SCHOOL MUSICAL 2: Un. Bear. Able. And the word “musical” is in the actual title. False advertising. Did someone consult Satan on which tonal modes would cause mortals to retch like chemotherapy victims? Director Kenny Ortega and writer Peter Barsocchini did indeed. Upon researching the precursor to this film, I see that Satan was in fact involved in all creative aspects of that insufferable movie. (My research involved exclusively reading my own review of HIGH SCHOOL MUSICAL. Hey, it worked for Dick Cheney with WMD and Niger.)

Disney Channel continues its unholy collaboration with Ortega, Satan, the sin-blue eyes of Zac Efron, and the songwriters who know those bilious tonal modes, to force on flailing humankind HIGH SCHOOL MUSICAL 2, a deathwish put to the beat of teen dream.

The same teen cast have all returned to make ass-faces of themselves, and we find them in their last day of school, as they sing/Auto-Tune an embarrassing song about summer vacation and what innocent things they intend to do besides get drunk and laid like normal kids their age. For a bunch of high school kids, they’re having way too much fun singing and dancing and not having sex. If people have this much fun doing anything, shouldn’t we examine their brains for some kind of nutrient deficiency? You doubt Satan was involved? Only the Prince of Hate could pen the lyric, “School’s out, scream and shout…” Oooh, can I have some soap to wash out my soul?…

Sharpay (stunningly bland blond Ashley Tisdale), in her quest to get within reverse-cowgirl distance of Troy, lands him a job at her parents’ All-White country club, where they hold an annual “musical contest” (how convenient), which she and her gay brother Ryan (Lucas Grabeel) always win. What? He’s not gay? Okay, then what he’s doing to her during musical numbers is just plain incest.

Troy immediately scams all his friends into jobs at the country club as well. What, you may ask, is the black guy doing there? (Troy’s best friend Chad, played by Corbin Bleu, the only cast member besides Efron who is a likeable presence.) Uh, he’s basically white, no? As is the Latina Hudgens, who has more Caucasian in her than when real-life boyfriend Efron is buried balls-deep. Besides these two marginally ethnic anomalies, the rest of the pasty cast are white enough to be poster kids for sickle cell anemia. But just to show us they have nothing against minorities, the Aryan-fascist Disney producers let the fat chick dance. How precious. And by precious I mean Based on the Novel ‘Push’ by Sapphire.

In her quest to get Troy to sleep with her– I mean, sing with her, Sharpay blackmails Troy into a new upper class lifestyle even more privileged and enabled than the one he’s already leading in his big house in All-White Americana with his father who looks maybe four years older than him (Bart Johnson). She keeps Troy away from his friends by burdening him with many more jobs (like golf instructor, waiter, baseball groundsman and douchebag), and he starts hanging with the rich peeps and neglecting his friends. This makes the mildly Latina chick mildly jealous, so she mildly holds hands with the gay brother (which in Disney parlance means rape-sex), and best friend Chad whines that he wants his basketball back (which in gay parlance means he wants his basket ball-back).

Sharpay (we wonder why her parents named her after a species of dog – Shar-Pei – and then she opens her big mouth and the reason becomes patently clear) and Gabriella expose a little more cleavage this time round, to make up for the songs which are blander and flatter than HIGH SCHOOL MUSICAL. Sharpay has also been turned back into the snide c-word she originally was at the outset of the first movie, even though everyone reconciled and danced together at the end of that travesty. Hypocrites? Deceivers? Two-faced? Or just the same old satanic mixed messages that don’t make any sense when applied to real life? Yeah, don’t let anyone tell you that you can’t do something; do what you wanna do!! But as soon as Sharpay tries to lure Troy away from his lower class clique (which is “doing what she wants to do”), she’s a rich bitch; as soon as Troy wants to hang with the pro ballers (which is “doing what he wants to do”) he’s an a-hole. Get your messages straight before burping at us from the anal cavity of hell, movie!

Admittedly, all that choreography is hard work and it comes together energetically. There is definitely an audience for these satanic works of chunder, but I suspect it’s humans under 15, gay guys and chicks. With such a niche demographic, how did this series catch on like a virulent disease? Easy: those three groups are the loudest demos – they’ll spread anything like a virulent disease…

Luckily, I was exposed to Zac Efron (down, girls!) in other films before HSM, so I know he has the acting chops to be destined for greater futures than these debacles would have us imagine. In line with teen dream flow chart, he sings the “Gotta Turn My Life Around” song, complete with punch dance. This movie has everything! Then jilted Gabriella sings the “My Heart Is Breaking” song, called I Gotta Go My Own Way, which apparently means turning up the next day to come running back to Troy because she’s a girl and stuff. Luckily, he doesn’t kiss her, or he’d get girl germs. Or maybe he does accidentally kiss her off-camera because his final act (after singing and dancing like a tool in front of a band of whitebread pussies playing unplugged electric instruments with no P.A.) is to leap clothes-first into the pool – to mayhaps wash the cooties off his hunky body? (Is it just me, or in the final shot when they’re both floating in the pool during the fadeout, does Gabriella look like she’s about to drown in between her fake smiles?)

Sigh of contentment… aaah, that soap feels good on my soul in this shower of redemption… Who’s that rubbing my back? Is that you, Satan?…

What Time Is It? • Cast of HSM
Get that chunder bucket ready, men!