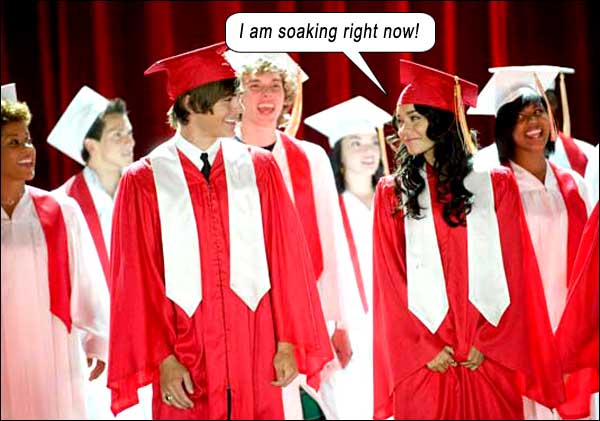 Zac Efron returns as Troy Bolton, beefcake boy-beauty of East High School, with his indeterminate-Latina girlfriend Gabriella (Vanessa Hudgens, getting whiter and whiter as the series progresses), as do the rest of the principal cast; Ashley Tisdale as Sharpay the overacting villainess, Lucas Grabeel as Ryan, Sharpay’s ambiguously-straight choreographer brother, and Corbin Bleu as Chad, Troy’s token black best friend.

HSM 3 is the first of the HSM series to be released in cinemas (as opposed to the previous two TV releases), with a script copied-and-pasted from HIGH SCHOOL MUSICAL 2. Change slug-line from END OF SCHOOL YEAR to SENIOR YEAR and hey presto! Thirteen inconceivably irritating songs later, we have another sequel to belch at a public too incognizant to realize they’re watching the same story and listening to the same songs.

There’s the “We’ve Got This Moment” song, the “We Need To Be Together” song, the “Breakup” song, the “I Need To Be Myself” song, the “What Do I Do With My Life?” song, and the “We’ll Always Have Each Other” song. All with shockingly original titles like Just Wanna Be With You (which Troy and Gabriella sing with absolutely no understanding of what ‘being together’ entails), A Night To Remember (sung by the cast about their innocent prom with no intimation of drunkenness, sexuality or any memorable anecdotes, just an abiding adherence to over-enunciating what fun they’re having), and The Boys Are Back (sung by Troy and Corbin for no reason at all).

Movie follows exact same flow chart as its predecessor, where the hero has to decide between pussy and career (and he somehow wins out on both, because – teen movie), and where the heroine leaves the hero to pursue her dreams and “Go Her Own Way” which apparently means giving up her dreams to follow the hero. 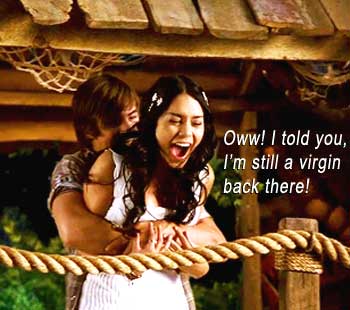 Exact same Troy punch-dance during the “What Do I Do With My Life?” song, called Scream, which he performs in the deserted theater at midnight, where nonetheless, a spectacular lightshow accompanies his enabled white upper-class wailing. While the drama teacher, Ms. Darbus, is sitting in the empty auditorium, watching him like some kind of perve. Sitting in the dark obviously, because until Troy got there, the lights were not on, giving some mimsy excuse on what she was doing – supposedly figuring how to substitute one girl for another in the school play, which could’ve been done in two seconds at her office or house. She reveals she sent a letter to Julliard on Troy’s behalf, which was some kind of damning plot point that we couldn’t care less about at this point. All I want to know is, Why were you sitting there in the darkness, you crazy old bird? 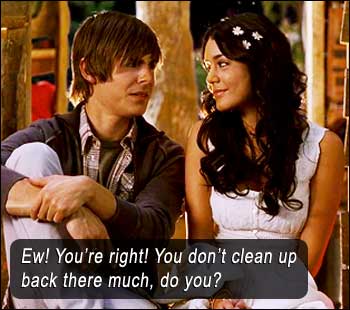 Troy’s father (Bart Johnson), is no help in the girlfriend department, although, just being two years older than Troy, you’d think he’d make a good wingman.

Troy visits Gabriella in faraway Somewhere-U and accosts her from a tree while wearing his full ducky prom suit, whereupon they dance and sing and it’s so romantic and then – they kiss! ACTUALLY KISS! For the first time in any HIGH SCHOOL MUSICAL! Who allowed this pornography up in this teen romancical? Satan, was that you? Is this your worm-riddled hand at work?

Whatever the annoyance quotient with the auto-tuned songs, the insufferable band pretending to play their instruments, the overacting and egregious non-plot, we must give credit where it’s due – the dancing by the principals is sometimes quite astounding. You can bullshit all you want on vocal recordings – which the principals are supposedly singing themselves – but you can’t fool the camera when it comes to well-rehearsed dance moves. Well done, bitches! Although, the musical numbers containing these dances are as insulting to our intelligence as the First World Problems these kids bemoan constantly that we’re supposedly meant to give one rat’s ass about.

Though the under-tweens and the gay community will find much to love in this quantum shitfest shot like a rainbow-cannon at their demo, HIGH SCHOOL MUSICAL 3 is the absolute worst of the trilogy and arguably the most offensive movie ever produced by mankind, irretrievably damning the human race to eternal flame. Game, Set, Match: Satan.

Now Or Never • Cast of HSM 3
If there’s a place on Earth farthest from Rock and Roll, it’s in the East High Gym during the opening number to HIGH SCHOOL DOUCHICAL 3.