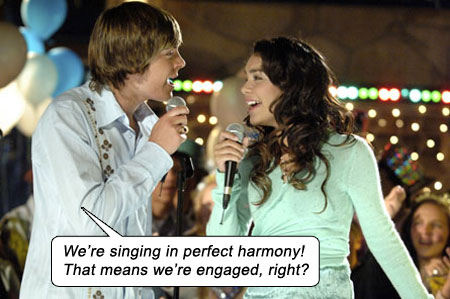 Troy (Zac Efron) is the popular high school basketball jock team captain; Gabriella (Vanessa Hudgens) is the unpopular new girl and mathlete nerd. From different sides of the tracks, these two Meet Cute on a karaoke stage (n.b. karaoke = sign of the devil) and discover their mutual love of miming in perfect key like Milli Vanilli (= sign of the devil). They get it into their perfectly unblemished heads to audition for the High School Musical, but their best friends (led by Corbin Bleu for Troy, and Monique Coleman for Gabriella) try to tear them apart because jocks don’t like nerds, and nerds are scared/hoping that jocks will ass-rape them.

Jocks do not sing and dance, so Troy is hesitant on whether to tell his jock clique of his newfound guilty pleasure. Oh, and by the way, just wondering, Troy, were you planning on telling them about your forbidden love of singing and dancing before or after you and the whole team singing and dancing on the basketball court?

And there’s rival teen blonde Sharpay (plain-jane Ashley Tisdale, desperately miscast as the snobby flamboyant chick), who has been the star of the Musical for years with her gay brother Ryan (Lucas Grabeel). Wait, he’s not gay? Girlfriend, my gay-dar is doing the Macarena over here. Anyway, it’s a musical. Everyone’s gay. Along with the rest of the school, Sharpay will do whatever it takes to sabotage the pairing of Troy and Gabriella. Mixed messages will fly like flaming arrows from purgatory at the impressionable teens of Earth; angels will battle devils for the souls of the young. And the devils will win.

Signs that prove incontrovertibly HIGH SCHOOL MUSICAL is the work of the devil:

Don’t tell me that writer Peter Barsocchini and director Kenny Ortega didn’t go down to the Crossroads and sell their souls to Beelzebub in return for overwhelming success on a breathlessly underwhelming product.

No matter what else Kenny Ortega does in his storied career, it’s pertinent to note that he helmed and choreographed the 1984 music video for Billy Squier’s Rock Me Tonite. Yes, that video – showing rocker Squier prancing around his pastel bedroom in a pink t-shirt playing air-guitar decidedly not like a rocker; considered to be the video that destroyed Squier’s career for its absolute, unequivocal homosexual overtones. In Squier’s own recollection [from Wikipedia]: “He was touring at the time, and recalls that as soon as the video came out, he stopped selling out shows, in some cases playing to half-empty arenas.” … That’s the director/co-choreographer of HIGH SCHOOL MUSICAL. Does it all start to fall into place now? Ortega, Disney, Satan… 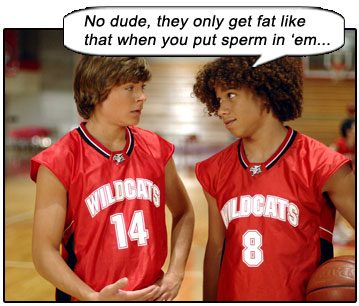 In the world of Disney, everyone is of a neuter gender, and Troy and Gabriella only want to “be together” for academic reasons, rather than to have sexual intercourse, spawn offspring or even kiss on the mouth. Thus, Troy’s skin can only come in contact with Gabriella’s through hand-to-hand contact. The number of times he and Gabriella come up forehead-to-forehead and are then interrupted from even kissing was a ploy by the MPAA (= sign of the devil) to give boy viewers blue balls. Because the devil, as we all know, is AGAINST procreation, being a Republican. Also, as all boys know, Troy might get girl germs.

The overacting will make you nauseous, the simpleton ethos will make you enraged, the music will make you question humanity’s vaunted position on the evolutionary tree. There are three words to describe the songs in HIGH SCHOOL MUSICAL: In. Suffer. Able. Written by Matthew Gerrard, Robbie Nevil, David Lawrence, Faye Greenberg, Randy Petersen, Andy Dodd and others, specifically designed to embarrass anyone over the age of 20 with their inscrutable, uncatchy melodies and child-chorus treacle, at least most of the actors supposedly laid their own vocal tracks to the songs they are miming to onscreen. There’s something to be said for that. And Auto-Tune.

Now I’m willing to admit that each high school generation has their special moment; a nostalgic time, place, event from their youth that their bitter adult souls can never recapture; a miasma of memories connected to people, events, movies, first sex, first car, first sex in first car, that mean nothing to anyone outside their privileged circle. My high school clique cut its teeth on and made its memories with GREASE (and this movie was initially written as a sequel to that film!). I remember at year’s end practically the whole class gathering at someone’s home to view that film and by movie’s end, many of us were so taken with the camaraderie of those high schoolers about to step into the world that we almost tearfully took down everyone’s contact information in the class. And never used it. But there’s a real special place next to my dead heart for that nostalgic moment in time when that film united us all psychologically. Ergo, a real special place for that film too. No matter how goofy it looks in retrospect. So too, I can imagine HIGH SCHOOL MUSICAL will have the same effect on youngsters who see it at that certain point in life when all that teen guff matters.

But I hafta ask: wasn’t there anything between GREASE and HIGH SCHOOL MUSICAL with just a little more street cred? What have high school kids been latching onto over the last 30 years? Is there nothing to bridge the gap between the cool swagger of Travolta and the effeminate bug-eyeing of Efron?

And I fully realize GREASE has its HIGH SCHOOL MUSICAL shortcomings. There’s singing and dancing in both, at just about the same level of ridiculousness, and the same message is espoused: do what you wanna do, be what you wanna be – nothing outrageously original – and the same flow chart of boy-girl relationship stultified by others is played out, with the same GREASE staging of the couples pairing off during the end dance number – but why is GREASE still so much more credible, as a movie and as a memory?

Because GREASE wasn’t made by Satan.

If you were born before 1986, watch this and try not to cringe. Go on. I dare you! It’s all about context: this clip on its own is no better or worse than any bilious teen-demo song; what makes it insufferable is that the two characters in the movie have never sung before, never been onstage before – and by the second verse they are harmonizing pitch-perfectly, not even looking at the words onscreen anymore (to an original song) and extemporizing. (And for some reason, the shape of his mouth, and the sound it makes, when he says “happen” is so annoying!)
Start of Something New • Zac Efron & Vanessa Hudgens

Now watch Kenny Ortega’s masterpiece and try not to cringe. At any age. Again, context: if Squier was going for the Bronski Beat market, he would have cornered it – but this was the guy who ploughed our ear canals with The Stroke, an unapologetic dig at the music industry misinterpreted as a sexist dick-stab. And here he was, looking less like the stabber and more like the stabbee.
Rock Me Tonite • Billy Squier