HIGHLANDER III: THE SORCERER should heed its own slogan: “There can be only one.” There should have been only one – one HIGHLANDER film, that is. Each sequel drives another vapid nail into the bottomless coffin that has become the HIGHLANDER franchise. HIGHLANDER was a magnificent film and, quite obviously, a completed story; there was never any question of a sequel – until the advent of Mongoloid Marketeers, Half Budget, Half Brains. 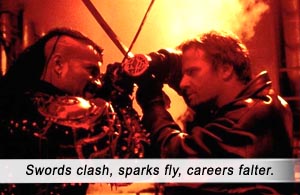 And a shameful pity that in favoring the original HIGHLANDER movie, one must add qualification these days. There was nothing like HIGHLANDER when it appeared; directed by Australian music-video director, Russell Mulcahy, featuring a kinetic soundtrack driven by Queen, a story involving Immortals all hiding in plain view amongst Earth’s populace, congregating for The Gathering, to battle for The Prize – the gift of foresight and mortality – and to be The One; featuring relative newcomer Christopher Lambert, suitably ingenuous as the Scottish Highlander Connor MacLeod, and Sean Connery aggressively fey as his swashbuckling tutor, Ramirez.

HIGHLANDER was engaging, humorous, poignant, original, well-written and well-filmed. Each successive sequel has been exactly the opposite.

Regarding THE SORCERER (aka THE FINAL DIMENSION), it is quite pointless reviewing or in any way even describing the plots of movies which do not adhere to their own internal logic. In this case (barring the first exceptional installment), this whole series has been battling against itself, in reneging on its own oft-repeated slogan: “There can be only one”. Well, obviously not… 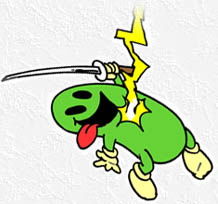 There can be only–ah phooey!

The disjointed characters move through THE SORCERER’S listless plot with no regard to continuity or semblance of purpose – they just end up where they need to be for a scene to play itself out – all those scenes which were obviously pitching points for the producers to lay on the money-men. It mattered not how to join those scenes, as long as the money was green and the picture was green-lighted.Also directed by a former music-video director, Andy Morahan, THE SORCERER displays none of the art and eye that Mulcahy brought to HIGHLANDER, though Morahan has no qualms in plagiarizing Mulcahy’s film at every turn, inserting “flashback” scenes to gird the storyline and attempt poignancy, copying scenes (talented actor/director Mario van Peebles, heinously miscast as the villain Kane, doing a pale impression of The Kurgan), and just blatantly repeating scenes from HIGHLANDER.

The movie’s early sequences display more than enough chinks in its feeble armor, where we catch up with MacLeod sometime after HIGHLANDER, but before the execrable HIGHLANDER II: THE QUICKENING, which, according to this film, apparently never happened. Then the illusion of plot collapses completely when MacLeod gets shot in a New York alley and in the next scene is being frantically dollied to an Emergency Room. Now: who in New York would look twice at a shot guy in a deserted alley, let alone ring it in?

Then it gets even more idiotic. Faster than you can say “Sean Connery appears out of nowhere.”

Upon awakening on the hospital dolly, his wounds healed, MacLeod becomes violent and the obviously unfit-to-practice doctor diagnoses him as “insane” in three seconds of fighting interns, drugs him and sends him to the lunatic ward. The only apparent reason for this seems to be to execute one of those screenwriter pitch scenes: Kane’s medieval henchman stalking MacLeod through modern hospital corridors (how he located him in this facility – with no time for even an efficient hospital’s paperwork to be processed – is beyond comprehension) and, though MacLeod is randomly trying to find an exit and the henchman is stalking purposefully, somehow both end up in the same basement laundry room. After all that setup – the shooting, the dollying, the lunatic ward, the stalking – MacLeod beheads the henchman with no fanfare and the movie moves on, into further contrived plot-less-ness.

The swordplay was choreographed by Young Billy from the sixth grade. A suitable nomenclature would be “air-guitar sword-fighting,” i.e. rather than actually trying to slice and dice each other’s bodies, the opponents slash at the AIR above each other’s heads and parry these strokes as if they were vital. In one sequence, Kane slashes at MacLeod, who parries Kane’s stroke, only to have his sword shatter under Kane’s blow. Kane’s follow-through, which should have then neatly severed MacLeod’s head, doesn’t go anywhere near it – what then, was Kane slashing at?

Sultry Debra Kara Unger plays The Chick and – like Roxanne Hart from HIGHLANDER – is aroused uncontrollably by the concept of Immortality, her foreplay also being the sight of MacLeod getting stabbed. Guess immortality is a magnet for sexual loonies….

Stereotypical moron cops (whose gratuitous swearing seemed unfamiliar to their untrained-actor mouths) hound MacLeod, whilst Kane kidnaps MacLeod’s child, setting up the strategic conundrum where The Hero can’t kill The Villain because he alone knows where The Hero’s child is.

But MacLeod kills Kane anyway. So much for strategic conundrums.

After the explosive climax – not describing the level of excitement, but rather, the many gratuitous Pretty Orange Explosions – when MacLeod is once again levitated with the electric ecstasy of being The Last Immortal Ever – ahem, again – his son walks nonchalantly down some stairs and reunites with him as if he’s just walked in from the kitchen.

To put the weak capper on an altogether limp movie, an impotent rock song sings us out over the end credits.