Sharp as a Katana, Breezy as a Kilt.

There is an important scene missing in the American cut of HIGHLANDER: During World War II, MacLeod (Christopher Lambert) finds an orphaned little girl hiding amongst ruins. When a Nazi guns them down, his body shields hers, absorbing the bullets, and they both fall. In answer to her amazed, “You’re still alive?”, he flashes that winning smile and whispers, “Hey, it’s a kind of magic!”

We learned earlier that MacLeod is an Immortal, who does not age, and who cannot be killed unless decapitated. The little girl grows to be his present secretary, Rachel, now an attractive older woman, whom MacLeod never took as a lover, though it is obvious she spent years yearning for him to do so. At film’s climax, when MacLeod leaves Rachel, both knowing it is the last time they will ever see each other, his parting words, “Hey, it’s a kind of magic,” lack the tear-jerking poignancy they should possess, for in excluding the war scene, this line is not a callback but simply a cute phrase tangentially apropos to the moment. 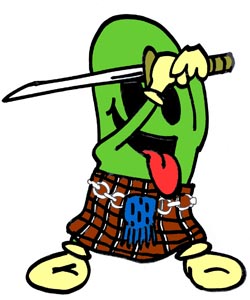 Notwithstanding this omission, HIGHLANDER is still a fantasy masterstroke; a sui generis film of classic proportions. Brought to life by former music-video director, Australian Russell Mulcahy and writers Gregory Widen, Peter Bellwood and Larry Ferguson, this tale is so original and well-executed, it is hard to imagine it was not culled from Scottish folk legend. As far as I can tell, there is still no evidence to suggest this.The opening tracking shots across a frenzied wrestling arena foreshadow how the movie intends to move us – in great arcs, with the bulk of humanity becoming a blur, as grander designs are played out. Long before Michael Bay abused the swooping camera pan, Mulcahy utilized it with heady effect for the grandeur it purveyed in tales such as this. The sweep zeroes in on the hawk eyes of a lone serious figure amidst the multitude of ululating rednecks, MacLeod, who makes his apprehensive way to the parking garage and the first of many – sword battles! Intrigue is piled high in these first few scenes, as the samurai milieu is juxtaposed with the grittiness and cynicism of modern-day New York; harried detectives talk of blade-steel folded 200 times and millennia-aged weapons. Further, this is a white guy in blue jeans and sneakers wielding a samurai katana – a novel iconic image, soon to be burned into our retinas.

After MacLeod beheads his adversary – now THIS was taking the crazy train into surreal station – and before any questions can be formulated, let alone answered, the Scottish Highlands are revealed in a breathtaking horizontal wipe. And a major piece of the puzzle is wrought: it is the 1500’s and we see MacLeod in another role, a young man in kilt and flowing mane, riding into his first battle with his clan. He is Connor MacLeod, of the Highland MacLeods.

Back and forth, between present-day New York and medieval Scotland, in creative transitions, Mulcahy reveals ever more details of MacLeod’s storied life until the character of Ramirez (an egregiously overdressed Sean Connery, promptly and aptly nicknamed “ya Spanish peacock” by MacLeod) fills in all the gaps after his timely appearance.

Ramirez battle-trains the naive MacLeod, telling him of their race of Immortals anticipating The Gathering, a time when every remaining Immortal will battle to the death, for There Can Be Only One to claim The Prize – an unknown condition that overcomes the last man standing.

The Gathering is now – present-day New York, where MacLeod must face the most malevolent of the Immortals, The Kurgan (an eeevil-yet-riotous Clancy Brown), who has trailed MacLeod since their meeting on a Scottish battleground centuries ago…

The modern mythology provided the sturdy skeleton upon which to drape the kinetic story. Tone could have easily become stodgy or too serious, but HIGHLANDER smoothly taps into its comedic and action wells without relinquishing the villain’s threat or the hero’s journey. Unfortunately, this tone would nevermore be so seamless, as the film’s cult success was its undoing; systematically murdered by its own diabolically-inferior sequels and offshoots.

Michael Kamen composed the score, but the more prominent sounds that engine the soundtrack are the Queen songs and instrumentals, which would be featured on their 12th studio album A Kind Of Magic (1986, EMI/Capitol), an unofficial HIGHLANDER soundtrack album, with six out of the nine songs featured in the movie’s soundtrack. (Also, when the military nut is driving around, we hear Hammer To Fall on his car radio, from 1984’s The Works album.)

Button-nosed Roxanne Hart is MacLeod’s modern-day love-interest. But for sheer romantic swoon, nothing beats Beatie Edney’s scenes as Connor’s first wife, Heather, in the lush, undulating Highlands, where we first hear Queen’s haunting, Who Wants To Live Forever, a song more prophetic than even Queen could have guessed, as vocalist Freddie Mercury had less than 5 short years remaining to astound the world with his musical gifts, achingly aware in the lyric, “…This world has only one sweet moment set aside for us…” An unbidden tear still threatens my masculinity whenever I hear that line…

MacLeod wins The Prize – foresight and mortality – which may seem, at first, not so glittering a prize, but to be appreciated, a more than cursory comprehension of “mortality” is required.

When I first viewed this movie in ’86 with my Queen-fanatic clique, the import of being “merely mortal” was altogether alien to us strapping 20-year-olds. It’s a sad fact that only when one experiences sickness can one appreciate health; likewise, when one has not experienced one’s mortality (in the manner of debilitating ailments, disfiguring accidents, chronic pain and the like) one inherently believes that one is “immortal” and that the world owes one Forever. But now, closing in on 40 like a rocketsled with faulty brakes, I surely grasp how this world has only one sweet moment set aside for us…

And only now does Ramirez’s closing monologue achieve crystal clarity – as applied to ALL mortals: “…You are generations being born and dying. You’re at one with all living things. Each man’s thoughts and dreams are yours to know. You have power beyond imagination. Use it well, my friend. Don’t lose your head.”

It’s a kind of magic.

A Kind of Magic
Gimme the Prize (Kurgan’s Theme)
One Year of Love
Princes of the Universe
Who Wants to Live Forever?