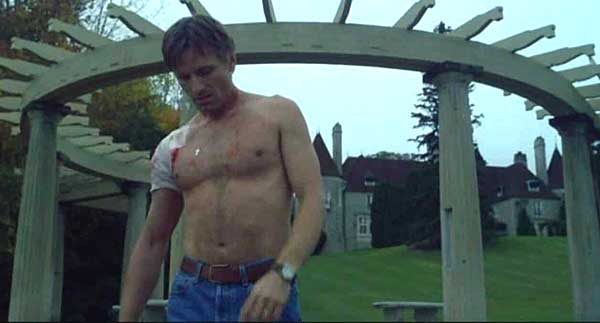 Remember when you violently helped those hobbits at this place?

When the Evil Twin Piques.

Director David Cronenberg assails his audience with A HISTORY OF VIOLENCE, surface “pulp thriller,” with an undercurrent of vigilantism, Darwinism and Plot Conveniences. A simplistic tale which careens against the cerebral precepts of Survival of the Fittest, Natural Selection and Freudian sublimation. (Any more big words, or are we done for the day?…) 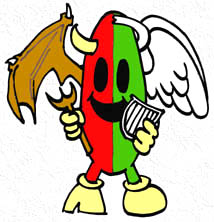 Loosely screenplayed by Josh Olson, from the graphic novel of the same name (by John Wagner and Vince Locke), A HISTORY OF VIOLENCE is a psychological thriller centering around leisurely Tom Stall (Viggo Mortensen), living the Life Idyllic in a town which elevates podunk to an art form. Running the town diner with the urgency of a napping camel, Tom is well-liked by his bumpkin employees and patrons, and long-married to wife Edie (steaming Maria Bello, so readily-sexed that every man in the audience immediately pegged her as a work of fiction – but we can dream, can’t we?).

During expository scenes establishing Tom’s still-lusty relationship with his spouse of 17 years, and his teen son’s status as the school’s bully-fodder (both sub-plots artfully invoking the word “pussy”), Cronenberg tweaks the Norman Rockwell ’til the syrup bleeds from the celluloid, setting up his audience in eerily-expectant treacle, to ensure that the subsequent dose of savagery will scythe like razor-wire…

Into Tom’s diner walks the criminal element from the disturbing opening sequence of the film – in a parallel universe, these two guys would be Lance Henriksen and Matthew McConaughey – who attempt to divest Tom of his languidly-earned cash at gunpoint. Big mistake! With the suaveness of a panther, Tom efficiently dispatches the two felons, illustrating he is somewhat less somnolent than his aw-shucks drawl implies.

Like George Lucas ignoring his actors for fear of clutter on his green-screen, at this point in the film, Cronenberg and his writers opt to ignore realities which would clutter his movie’s thematic sweeps, to wit, The Media and The Law. The Media, which is instrumental in alerting Tom’s presence to characters from his unsavory past, suddenly vanishes altogether once it serves its purpose of conjuring those characters into the storyline; indeed, the absence of an intrusive, ubiquitous press – which, in our reality, would descend rapaciously on a multiple murder story before the last body’s chalk outline is drawn – leaves us stranded in an insular universe of the film-maker’s creation, and we shift uneasily in our seats at this lack of plausibility.

Like an Armani-suited vulture, out of Tom’s past swoops the sinister Carl Fogarty (Ed Harris), all one-eyed and unnerving, and calling Tom “Joey from Philly” with the insistence of a jabbing finger to the chest, presaging Tom’s descent into his dark half.

Though the trailers tout this “mystery” aspect, we are ahead of the characters in identifying that Tom is indeed a re-wrought persona of professional killer “Joey,” and the movie is more a study in Tom reconciling his adopted pacifism with his innate violent streak. After sublimating it for almost two decades, it is his dormant Art of Killing which saves Tom’s life. Guess it’s like riding a bike.

After loosing his inner beast so publicly, Tom finds that his whipping-boy son has opened a can of whup-ass on his own bullies. Whether he does this due to his father’s latent “violent genes” or because his father set a decisive example, we are not to know (Nature vs. Nurture?), as a father-son confrontation leads only to a smack upside the head from Tom. When the son goes Outlaw Josey Wales in a later scene, the question looms larger, but it is not Cronenberg’s purview to answer his thematic questions, only to pose them. Matter of fact, he avoids wrestling his themes to the ground like the Stall family avoids open discussion on Tom’s sordid past, leaving us, once again, shifting uneasily. 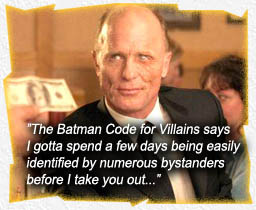 In his outré universe (NAKED LUNCH, CRASH, EXISTENZ), Cronenberg is king – some may contend dauphin, to David Lynch – of suspenseful, disturbing vignettes, left-field sex, and unapologetic brutality that allows him loving close-ups of decimated faces and mutilated nose cavities; of these aspects, there are plenty in HISTORY OF VIOLENCE, as well as Tom’s underlying themes of alienation and betrayal (with his wife), hero-worship and anger (from his son) and self-doubt and intrinsic dependence (on his bad self – not SHAFT bad, but actually bad). Yet we cannot reconcile or forgive the haphazard conclusion tacked onto this otherwise engaging drama, starting its fall from grace at the point where the seemingly one-man Sheriff’s Department, Sam (Peter MacNeill, recently Detective Horvath of Showtime’s QUEER AS FOLK), exhibits embarrassment in questioning Tom – who was only at the quintuple-murder stage at that point! – which serves to highlight the absence of high-level judicial inquiries regarding Tom’s hurricane of violence; the Cronenberg “Ignoring Quotient” in overdrive.

By the time Tom faces his brother, Richie Cusack (a dangerously-smarmy William Hurt, doing his best Gary Oldman), the film degenerates into an Adam West BATMAN episode, in which the Villain, who has every opportunity to eradicate the Hero expeditiously, instead plots a prolonged and gruesome death for him, with a lot of Villain-talk – if only the darned Hero would cooperate and stop that infernal escaping! The last scenes seem to be a visceral payoff for the bloodthirsty contingent, and leave us with unanswered – and maybe unanswerable – questions regarding the future of Tom’s estranged family dynamic.

A history of violence? Isn’t this Viggo fella the same guy who spent the last four years raging postal at Helm’s Deep and Pelennor Fields, slaughtering thousands of face-challenged evil-kins alongside a dandy archer and fey wizard? You can run, but you can’t hide, Aragorn, Son of Arathorn!…