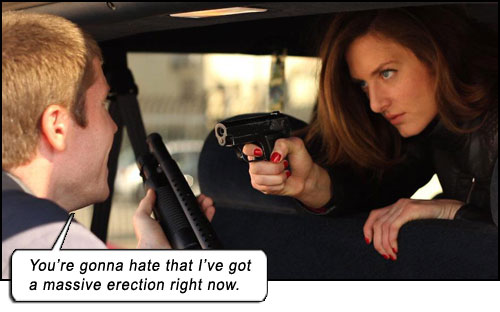 When comedy beats us over the head and tells us to like it.

Inept Max (Myles McLane) and efficient Ruthie (Emerald Robinson) are a HIT TEAM from Las Vegas, driving around Los Angeles in a minivan trying to make six kills in one day for their eccentric, showtune-warbling boss Michael (Douglas Macpherson). Things go awry, and Michael puts a hit out on Max and Ruthie. A workable dark comedic plot, which would be more enjoyable if it weren’t for the best actor being the minivan.

The hit team is pursued by two clueless cops, Cynthia (Anita Leeman, this generation’s Neve Campbell) and Akeem (Roger Payano, who’s dying to be this generation’s Eddie Murphy), who drive around in a patrol car that is an even better actor than the minivan.

Mark Newton directs this thug farce with a reasonable eye, but has the timing of a sloth and the wit of a baboon; from a script by Myles McLane that reads like Quentin Tarantino meets Greg Brady (before he started banging Florence Henderson). Dubbed almost as well as a GODZILLA film, the persistent bad looping in HIT TEAM ruins what might have been some mediocre gags, and makes the kitchen counter acting look worse than it actually is. Stunningly bland locations and cinematography, and virtual bullet wound effects (rather than blanks and squibs) add to the distraction of not being able to settle into the film and enjoy it, much less pay attention to it. It doesn’t help that all the actors fire tiny guns with pretend-recoil like .44 Magnums. Maybe the minivan could give them some acting lessons… 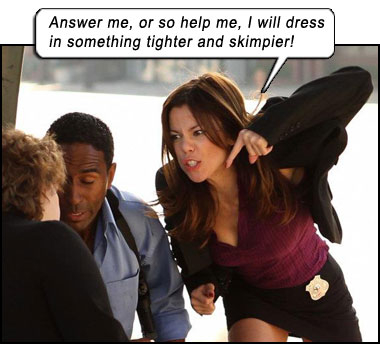 Hats off to Myles McLane as the force behind this indie production – as writer, co-editor, lead actor and one of the producers; kudos to any and all that put their blood, sweat and bone into creating product. However, with HIT TEAM, McLane is dipping his toes into a pond where the big boys play – Scorsese and Ritchie and Tarantino – and once you enter this milieu, you must necessarily be judged with the same dogged scrutiny as the masters are judged. And that’s when your toes get chopped off. What I’m saying is, McLane is also ultimately to blame for this indie production…

It ain’t easy writing black gangster comedy – you walk a razorwire tightrope trying to create canny criminals who are yet too incognizant to realize they’re incongruously funny in the context of a society strictured by laws. The filmmaking community is always playing catchup with the best exponents of the genre (PULP FICTION, IN BRUGES, LOCK STOCK AND TWO SMOKING BARRELS, SNATCH, RESERVOIR DOGS, GET SHORTY, et al), because a truly compelling crime comedy is ahead of the game, and not following real world conventions at all; explodes with a hyper-reality where the thugs speak like hipsters and the brutality is balletic.

With HIT TEAM, Mssrs. McLane and Newton unwittingly aspire to PULP FICTION (banter between two hitmen) and IN BRUGES (boss personally trying to whack his two hitmen). But they’ve missed the key element of that genre and those films: the characters never act like they’re in a comedy. Whereas in HIT TEAM, everyone acts like they’re in a comedy – thereby making it not comedy. In those superior movies, everything is casual and incongruous: from PULP, both thugs blissfully unaware of the incongruity of touting “the foot fuckin’ master” not two minutes before they have to perform a hit; from LOCK STOCK, the “translation” describing Rory Breaker burning a man for changing a TV channel; from RESERVOIR, the whiplash dialogue during the Mexican standoffs (homage to John Woo); from BRUGES, the decision-making by the boss and his intended victim, on which way to run and be chased… The gangsters in all those films never drop a punchline, never act like they’re reading comedy and, most importantly, never react to each other’s comedic dialogue like it is comedy. Yet everything they say is as hilarious as a “Royale with Cheese…” 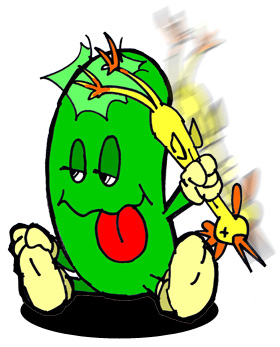 Nothing as subtle in HIT TEAM, as we are beaten over the head with the rubber chicken that is this film. Director Newton let all the overacting and face-pulling go unchecked, allowing the characters to telegraph their comedic intent with every dubbed line and slapstick misstep. Example: one of the marks is named Dick Jackoffski. No, really. Though much screentime is fried trying to prop this joke up, the only moment of inadvertent comedy associated with Jackoffski has nothing to do with his name – it’s when he is shot in the head and he exclaims, “Ouch!” No, really. Who knows: maybe Newton’s vision was one of broad, clownish caricatures. I see a great future writing for REN AND STIMPY.

Angular ginger McLane at times reminds us of the raving Denis Leary in SUICIDE KINGS (in fact, reminded me so much of Denis Leary that I started to warm to him, until I remembered what separated them – Denis Leary is funny). McLane can’t quite figure how far into Jerry Lewis to take his shtick without Muscular Dystrophy calling and accusing him of rape. His unremitting mugging comes with an incessant stream of sexual innuendo aimed at Emerald (who I’m sure was conducting an experiment whereby she did all her looping whilst not looking at herself in the monitor, with an accent that leaves us sorry for her, as the left half of her tongue is obviously paralyzed). Roger Payano as Akeem is just trying too hard, and Anita Leeman as Neve Campbell is straining harder than her thigh-high skirt against her buns to out-overact Payano. They all end up trying. Very trying. Douglas Macpherson plays the mob boss with less conviction than a toaster; the closest he’ll ever get to good acting is by looking vaguely like Paul Giamatti. A glamour blonde attends his every whim, whose voice was dubbed by the toaster.

McLane’s screenplay illustrates he understands the concept of character arc – male and female leads at odds with each other, share some quiet moments, prove their worth, and eventually share a kiss at sunset. Yup, that’s the concept. Even studio execs with no talent for storytelling or moviemaking can cite that Screenwriting 101 device. But fleshing out your characters compellingly and logically, making them leap off the page in three dimensions – well, that’s the screenwriter’s real job; making us care that their characters’ fates will be favorable, at the least, logical. McLane plays Max like a retard; the few moments he steps backward into aiding Ruthie (which Emerald plays as disdainfully efficient) or lowers his voice to exposit his origins doesn’t change his bearing; he remains a retard tactlessly trying to get into her panties. The question remains: what warmed Ruthie’s ice-thighs to Max’s relentless stupidity and lecherousness? Was it that Denis Leary thing?

The two cops also inexplicably become an item at the end – with zero foreshadowing. Unless you call all that gushing over each other’s inept crime-fighting methodology romantic foreshadowing. It’s an unnecessary coda that diverts our attention from the two leads and fries more screentime for no payoff. Like this paragraph. 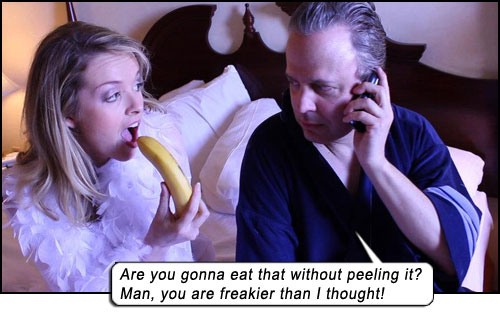 A review for Tommy Wiseau’s cult calamity THE ROOM (2003) read, “Watching THE ROOM is like being stabbed in the head.” Is it good news or bad news for Newton and McLane that watching HIT TEAM is not quite as painful – maybe stabbed in the spleen or lower thigh or something?

Only time will tell whether HIT TEAM will end up a cultie, with the inexplicable notoriety of THE ROOM or SHARKNADO, but I can tell you it has already won the Independent Spirit Award for Best Supporting Actor. For the minivan.