This film needs a brain-frying dose of Tom Leykis (radio “professor” with strict set of dating tenets – “Leykis 101”: “Never spend more than $40 on dates; Three-date limit until tail; Never sleepover at your place; No gifts ever to booty calls and women you date; Do not change who you are for a woman; No weekend dates unless guaranteed sex; Your income level determines your date’s level on a 1 to 10 scale – more income = higher number…”). 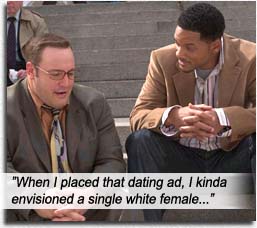 In HITCH, dating guru, Alex “Hitch” Hitchens (Will Smith, in customary Mr. Nice Guy gear, arguably the black Tom Hanks), runs a thriving “consultancy” business offering advice to introverted guys on how to score A-List women. Known in hush-hush circles as The Date Doctor, his own dating life suffers a muscle cramp when he meets a lowlife scum whore (i.e. a gossip journalist) in the form of Sara (Eva Mendes, looking quite “rumpy,” wearing a pushup bra that can’t possibly be comfortable).

Let me guess: they meet, they likey, they fighty, they marry.

Underscoring the egregious romantic claptrapping are Hitch’s “basic principles” for dating: “No matter what, no matter where, no matter who, any man has a chance to sweep any woman off her feet.” A strong start, but then reads like a vanilla Tom Leykis, shying from all the darker social realities like self-esteem, insecurities, financial hooks, Oedipal and Electra complexes, and conveniently avoiding the fact that to “win” this out-of-your-league woman, you have to begin with deceit (i.e. NOT being yourself).

This movie’s monotonous agenda is to once again push the moribund precept of Marriage Equals Happiness. No matter the disparate backgrounds of the married pair.

Firstly, women “out of your league” are never going to be your “soul mate”; they surf shark-infested waters miles above your tiny pond.

This doesn’t seem to matter to Albert (Kevin James), an accountant who desires heiress, Allegra (Amber Valletta). Adhering strictly to Insufferable Romantic Movie Protocol, when a pathetic character like Albert exclaims his “love” for a woman he’s never met, we are meant to believe wholeheartedly and goodsomely in his sincerity, as Hitch does. “Stalker” is only a word on the 6 o’clock news.

Snappily written by Kevin Bisch (placing words in the lead chick’s mouth way too witty for a real life woman to ever utter during a pick up), adequately directed by Andy Tennant, there are actually two laugh-out-loud moments in HITCH, both surprisingly involving Kevin James (whose long-running sitcom, THE KING OF QUEENS is about twice as funny as EVERYBODY LOVES RAYMOND – which means it isn’t funny at all): there’s something inherently disturbing about a Fat Man-Dance, and James milks it like prize-winning cow-teats (“The q-tip, the q-tip, throw it away”); and our lips scrunch in sympathetic fervor when Smith teaches James how to lean in for The First Kiss (“Go 90-percent and wait for her to come the other 10-percent”).

Hitch (his name cunningly allusive to “getting hitched” – and he’s a confirmed bachelor, get it? That’s almost as ironic as THE KING OF QUEENS) eventually recants his “basic principles,” even though the whole movie has been based on them: “If she jangles her keys she’s interested,” “Women relate dancing to sex,” “Treat it mean, keep it keen” (that last is not one of Hitch’s; it’s one of mine, but you can have it gratis).

There is the standard man-hating, chick-whining (once again, the female double standard allowing Sara to get away with kneeing a man in the groin – with no repercussions) and the usual misogyny-disguised-as-thoughtfulness (“Of course she’s going to lie to you – she doesn’t want to hurt your feelings”) – but the movie ultimately preaches to both its choirs. And, of course, there’s the gay friend (simply for the audience to laugh at for being gay).