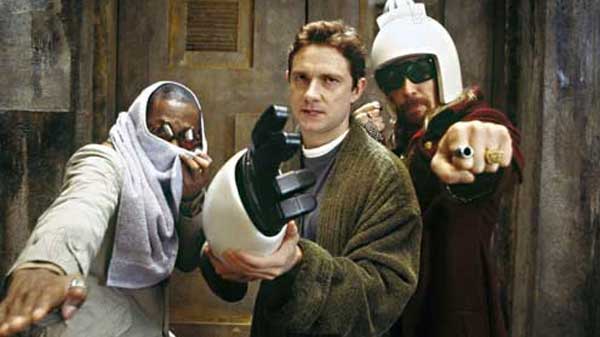 Mining the Diary, Missing the Madman.

Douglas Adams did not live to see his wondrous literary creation, The Hitchhiker’s Guide to the Galaxy, made into this feature film. Maybe that’s fortunate.

Each individual component of this movie is well done, from Garth Jennings‘ direction, to the astoundingly creative set design (all the good guys sport spherical décor, the bad guys, cubical) and creature visualizations (the Vogons are magnificently vile prosthetic puppets), to the performances (from creatures and humans alike), to the creation of the on-screen Hitchhiker’s Guide entries, to the artful compressing of Adams’ sprawling opus into a 109 minute movie. Yet somehow, the end result of all these superior elements comes out as flollopy as a mattress from the swamps of Squornshellous Zeta.

Eternally-vexed Arthur Dent (Martin Freeman of Ricky Gervais’ THE OFFICE) is hitch-hiked off Earth by Ford Prefect (Mos Def) just before it is vaporized by Vogons to make way for a hyperspace freeway. So begins Arthur’s trek through the galaxy in the company of opportunist Ford, intergalactic rogue and President of the Galaxy, Zaphod Beeblebrox (Sam Rockwell) and flighty Earth girl, Trillian (Zooey Deschanel), attended by “paranoid android,” Marvin (voiced by Alan Rickman).

Approaching a movie with this level of cult status is slippery from the outset. The screenplay issues from the demented pen of Adams himself, so cultists have little to complain about, though whether his second draft should have been the FINAL one – his death getting in the way – is definitely a matter for contention. Objectively, this enterprise is miles above the British television series – for production value, better acting and snappier writing – but fails in conveying a sense of empathy, because we do not get to live with these characters through weekly adventures.

The actual Guide is smartly purveyed as a computer – even in our modern day, we call laptops “notebooks” – and there are seemingly endless elements of Adams’ book incorporated into the Guide and the movie itself. The more obsessive you are, the deeper into the movie you’ll fall.

At film’s end, when the Improbability Drive turns the spaceship into various objects – as our intrepid adventurers seek the Restaurant at the End of the Universe – Adams’ face is the last image we see as the space cyclorama fades to black. We can only hope he would have been proud of the effort.

And the question remains: With the movie failing to break box-office enough to warrant funding for a big-budget followup, how many inferior sequels will be churned out to court the cultist fanboy dollar?

The answer may be as unimportant as Slartibartfast’s name.

Then again, the answer may just be 42.