The Barbaric Yawp of the Lunatic Fringe.

In 1970, author Clifford Irving fooled all of the people some of the time when he produced the autobiography of one of the world’s most intriguing recluses, Howard Hughes. 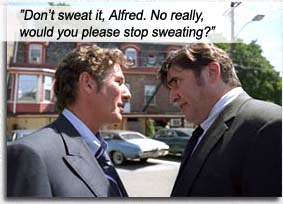 Like all great hoaxes, it eventually served him better than the truth.

And like all movies “based on true stories,” we approach cautiously where truth fears to tread. You see, THE HOAX is the movie about the making of the book that would become another book about the movie we are watching. No matter which way you squint at it, you’re gonna end up cross-eyed.

THE HOAX is screenplayed by William Wheeler and directed by Lasse Hallström, starring Richard Gere as Clifford Irving, the author who convinced publisher McGraw-Hill and Life magazine that he was authorized to tabulate the dictated Autobiography of Howard Hughes (1971). He was not, of course, and despite many adversities (from within and without the Irving camp) the book was published. Now here’s where it gets cross-eyed: after Irving was exposed as a fraud in early 1972 and spent 17 months in jail, upon his emergence, he wrote the book The Hoax (published 1981 – date varies with source, but the 2007 reissue, to coincide with the release of the movie, is no hoax). It is this book that this movie is about – the silver-tongued, sweaty machinations of two desperate grifters.

At least, that’s what the movie makes them out to be. When we open on Irving, he is already a fast-talking con artist, his middling life with Swiss-German wife, Edith (Marcia Gay Harden), injected with cons of cars, loans and luxuries. Dick Suskind (Alfred Molina) is his overtly-sweating literary assistant. It is the early ’70s, and billionaire film-maker, aviator and entrepreneur Howard Hughes is already regarded by many as nuts or dead or worse; newsreel footage of Hughes and the era is intercut throughout the film, giving us context.

With a book deal dead, Irving desperately wants to ensure his next idea (and pay advance) will not be killed in utero, so concocts a story that the secluded Hughes – whom he truly believed would be too sick or too crazy to condemn his book – has commissioned him to write Hughes’ biography, which would be dictated to him in private. Forging handwritten letters of intent and carefully caressing the Hughes enigma, Irving stipulated conditions whereby he became the “spokesman for the lunatic hermit” – the sole voice, contact and payee for Hughes in the outside world.

Irving’s methods and madness are an entertaining duplicity, as he and Suskind are shown stealing documents from the Pentagon, wildly photocopying manuscripts of Hughes’ chief executive, Noah Dietrich (Eli Wallach – that guy is still alive?!) and wordsmithing their way through business meetings, with Irving eventually physically and verbally channeling Hughes so eerily that even Suskind is taken aback. But – as a dissatisfied real-life Irving tells it – the film’s content is itself “a hoax of a hoax.”In the author’s own words: “The movie misses the point that the Howard Hughes hoax was a live-action adventure story concocted by two middle-aged hippie expat writers and a Swiss heiress.” – from CliffordIrving.com

Who am I to argue?

In the film, Irving is a desperate, pathological scammer and Suskind, his jittery, not-too-bright sidekick. Real-life Clifford Irving: “Dick Suskind, witty friend and co-conspirator, is offered to the public as a self-righteous, sweaty buffoon. The scenes that deal with Movie Clifford feuding with Movie Dick, getting him drunk and hiring a bargirl to seduce him, are totally fictional. The Hughes people mailing the package of files to me is also made up.”

Movie Irving tells Suskind that the more outrageous the lie, the more inclined people are to believe it. “I handed them 3 yellow letters and they gave me half a million dollars. Is that plausible?” As the publishers’ suspicion grows, Irving’s audacity grows disproportionately. When a publishing exec (Stanley Tucci) insults him during a negotiation, “Who are you anyway? Clifford Fucking Irving!” Irving counters in wrath, “I’m Howard Hughes!”

One would think that the McGraw-Hill and Life publishers who hung on Irving’s every word (because it was supposedly coming from, or about, Hughes) would be more canny – but the reality is: there is a part of all of us that wants a hoax to be true.

In the end, movie Irving (slicking back his hair, penciling in a mustache and hallucinating about Hughes’ thugs roughing him up) has gotten so deep into Hughes’ head that he probably could’ve written the definitive biography if Hughes had okayed it. One of McGraw-Hill’s head publishers, who had met Hughes, lauds Irving’s book as authentic for its perfect emulation of Hughes’ speech patterns.

It was obvious that the money issue, which would be Irving’s downfall, was never thought through, as firstly there was no way Irving, Edith or Suskind could convincingly cash all the checks paid to Hughes through Irving and secondly, any large expenditures or sudden windfalls would be monitored by the greedy government staking its claim in all personal income.

It is scary how big Hughes actually was; the movie intimates that he had a hand in the pocket of the grandest hoaxer of all – Richard M. Nixon – and that he was unhappy with Nixon after he “stopped doing tricks for Hughes” when he gained the Presidency which Hughes helped him attain. I’m just sayin’… Watergate. I’m just sayin’.

Is the message of real-life Irving simply his audacious will to action? That to ever make a dent in this world – do ANYTHING. Key word: do. Create product; throw it at the beast and as long as it is there, it counts. Sure, he paid with jail time, but don’t we all pay in some way? For fame OR infamy. Though a ruse, this product of his is now more famous than any of his other work. That’s one barbaric yawp heard ’round the world.

And that’s the truth.