Back and There – Again…

Swooping over mountainscapes aglow with ice, through subterranean caverns ahowl with goblin revelry, over battlefields strewn with armored death, through the living forests of Mirkwood and the majestic spires of Rivendell… damn, it took me a long time to get to the theater!

The epic journey begins; the prequels, if you will, to THE LORD OF THE RINGS (2001). Genius director Peter Jackson, who brought us the RINGS trilogy in rainbow mayhem, now helms THE HOBBIT: AN UNEXPECTED JOURNEY (from J.R.R. Tolkien‘s 1937 book The Hobbit, or There and Back Again), once again taking the stone-masoned words of Tolkien and amplifying them in sound and vision, with the soul of a necromancer, the magic of a wizard, and the balls of a balrog.

THE HOBBIT opens in Middle Earth, with Bilbo Baggins in his hobbit-hole in Bag End, Hobbiton, writing in his diary. A suitably calm introduction; also welcoming, reassuring, as we see that Bilbo is – Ian Holm. Then into the room walks Elijah Wood as Frodo! Oh, frabjous day! We are Home. Immediately charmed, creating continuity, a sense of returning to the beloved embrace of a world we left 10 years ago, that we missed like drunken lovers.

“My dear Frodo, you asked me once if I had told you everything there was to know about my adventures. Well, I can honestly say I’ve told you the truth, though I may not have told you all of it…” 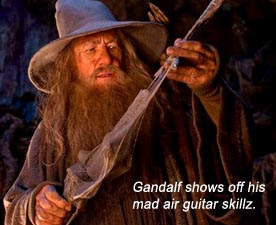 While old Bilbo recounts his adventures in voiceover, in flashback we meet young Bilbo (Martin Freeman), as wizard Gandalf the Grey (Ian McKellen) enlists his aid to accompany a troupe of 13 Dwarfs led by Thorin Oakenshield (Richard Armitage) to reclaim their homeland Erebor from the Dragon Smaug; hiring Bilbo as a “burglar” because Smaug knows the smell of Dwarf but will apparently be confused by the smell of Hobbit. A big chance to take with a monster the size of a football stadium. (We are only granted visual snippets of Smaug, his full fiery fury no doubt awaiting revelation in Jackson’s next installment THE HOBBIT: THE DESOLATION OF SMAUG, slated for 2013.)

With his decision to make three movies from one small book, I worried that Jackson (and co-writers Fran Walsh and Phillipa Boyens) would pad the films with every single poem and arcane song and afterthought from Tolkien’s Appendices. When we hear two Dwarfish songs within the first ten minutes, that doesn’t bode well. If this kept going, I thought maybe I’d sneak into SKYFALL instead… 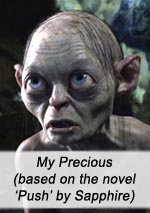 A fish-out-of-water tale, a chase movie, a quest for home, 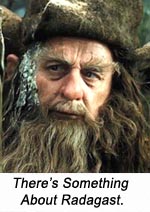 a redemption tale, a revenge and bromance all in one. Layered like Farrah Fawcett’s hair from the ’70s. With thankfully no more singing! Awe-inspiring sights to behold at every turn; not only the imaginative dressing and CGI of the massive 360-degree sets (Mirkwood, the capacious Goblin Hall, Rivendell), the raw wilds of New Zealand thrum and shimmer as living coruscating backdrop (the location scout really deserves some extra cookies). The astonishing creatures: Stone Trolls (one dumbass comment away from being the Three-Headed Knight in MONTY PYTHON AND THE HOLY GRAIL), the unholy Orc Azog (Manu Bennett), whose arm was claimed by Thorin; the sleeker-designed Wargs in a harrowing chase across undulating plains (magnificent scope and planning); eccentric Wizard Radagast (Sylvester McCoy – is that birdshit in his hair or dried jizz?); the bloated Goblin King (Barry Humphries) with a scrotum where his triple chin should be; the teasier-sleazier Gollum, one lisp away from being Jarjar Binks (Andy Serkis only does one scene as Gollum – from the chapter Riddles In The Dark – with even more sensors on his face to produce a more expressive gangrel creature than ever before; also employed by Jackson as the 2nd Unit director! “It wantses Action!” “It wantses Cut!” “Check the gateses.” “That’s a wraps, Precious!”)

Every detail breathtaking, every battle nail-biting, every stabbing scrotum-shriveling.

Of course, to construct a tale so action-packed compelling, it must necessarily become one long succession of “out of the frying pan, into the fire” (the title of Chapter 6 in The Hobbit), and thus one deus ex machina after another, as our heroes are pulled from, carried away from, fall out from under, or merely find a path to run away from, imminent death. The most annoying of these deus exes is – as in RETURN OF THE KING – the Eagles, Gandalf’s ever-vigilant big birdie pals. Whenever he’s in a jam, Gandalf asks a moth to summon them and sure enough they arrive, and easily un-jam Gandalf with their size and power. They can take out orcs, wargs and Nazgul fer cryin’ out loud – and when we ask the sensible question of why they don’t just fly our heroes to their destinations, we get apologist explanations like, “The Eagles are not slaves; they are a proud race and cannot be told what to do blah blah…” Well, why turn up at all? Hey Eagles, you know that Gandalf is always doing something for the good of Middle Earth, which means it would help you too, right? Why not help him by hanging around? You got better eagle-y things to do than saving your own eyries? Screee, my ass! 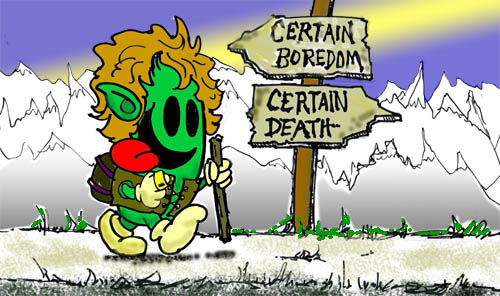 Not only do Holm and Wood make cameos, but also any actor required to reprise their roles from LORD OF THE RINGS: Elf Hugo Weaving as the sweet transvestite Elrond, Christopher Lee as the white mummy Saruman, and svelte elven Cate Blanchett bringing her estrogen as Galadriel, the only woman in the cast, to balance out the dwarf sausage-fest.

One of the best things Tolkien did was write about these mythical creatures as warriors. Whereas our image of Dwarfs and Elves have been skewed by Snow White’s impotent bedwetters and Santa’s communist workforce, Peter Jackson took Tolkien’s imagery and elevated it to the best medieval hand-to-hand battle scenes in film today. Real warriors, real battle, as rabid as anything from RINGS, from beings which had the rep for being cutesy sprites and lemonheads. Revel in the man-chest of Dwalin (Graham McTavish), the ferocity of Oin (John Callen) and Gloin (Peter Hambleton), the understanding of Bofur (James Nesbitt)… And there’s Kili the bowman (Aidan Turner) channeling David Cassidy – some stunt casting For The Laydayz!

As much action that blazes across the digital magicscape (accompanied by Howard Shore‘s mystical, biblical, cosmo themes), Peter Jackson brilliantly balances poignancy and introspection: As invisible Bilbo aims to take off Gollum’s head in a sword-stroke, he sees the desolation in the creature’s eyes – as we all do in one tear-jerking moment – and spares him; when the Dwarfs heckle Bilbo about yearning for home and why he rejoined their sausage-fest when he had the chance to leave the quest, he unflinchingly replies, “Yes, I miss home and everything in it, but I have a home. And you don’t. And I will help you take it back if I can.”

Martin Freeman brings his bemused, slightly jumpy manner to Bilbo Baggins; it’s Tim Canterbury from THE OFFICE (2001) in Middle Earth! Nonetheless, it fits him like a vest of Mithril. Though he starts the adventure by channeling Ian Holm, he becomes very much his own Hobbit by the time he gives that touching monologue above. By which I mean, he becomes Tim Canterbury.

Yes, the film downplays Bilbo’s avarice in seeking his 1/14th share of the treasure; it seems like he is ALL ABOUT helping his fellow woodland creatures – but then we see how he secretly guards the Magic Ring he just found (complete with its own musical theme), how he inadvertently realized it made him invisible when worn…

With a running time of nearly three hours, we hardly notice. Before we know it, the Eagles have deposited our heroes on a lonely escarpment overlooking the 100 miles remaining to their destination, and flown off to do more important Eagle-y things. For why they couldn’t have simply flown them the rest of the way in a few minutes, see above excuse. And our heroes gaze out over the misty miles and see the sequel in post-production.

Unlike George Lucas, Peter Jackson has triumphed with this first prequel. HOBBIT aficionados will no doubt take minor issue with some filmic liberties (Azog, who does not appear in the book, becomes the villain device here, the relentless pursuer of Thorin, who must stand up to him or die trying; for dramatic purposes, the story arc centers around Thorin reconciling with Bilbo in man-appreciation), but the rest of you Shire-folk will marvel at this filmmaking juggernaut. You will gasp, you will laugh, you will weep, you will dance with chocolate in your hair. You will taste the soul of a necromancer, the magic of a wizard, and the balls of a balrog.

Feels Like The First Time.
I was in a theater filled with little kids who were not even alive when LOTR was released in 2001. Usually, I detest the little snotters in movie theaters, airplanes and my general vicinity. But I was in a contemplative mood, and wanted to vicariously experience what they were seeing for the first time.

Since I’ve seen LOTR many times over, this jaded cucumber-manchild is expecting more of the same from a mustered director and his crew, whether I realize it or not, whether I enjoy it or not. I cannot un-see or un-know. But how will these halflings see these Dwarfies and battles and monsters and sausages? Can I possibly get into their heads? Like them, can I simply pay minimal attention and dance with chocolate in my hair?

Well, if I wanted to be that pure, I would have been escorted gingerly out of the theater by my frustrated parents – as many of them were. Turns out this “children’s book” THE HOBBIT is layered with political intrigue, far-reaching plots, backstories that would maim a mule-deer, and some pretty stunning violence that will one day be blamed for a school shooting.

The Hobbit: An Unexpected Journey
SOUNDTRACK