Attack of the Action Sequences.

Hobbit Bilbo Baggins and the troupe of Dwarves from Erebor continue their quest through Middle Earth to reclaim the Dwarves’ homeland from the Dragon Smaug.

Along the way they are attacked by Orcs, cocooned by giant spiders, imprisoned by Elves, barreled through rapids, smuggled by a boatman, sculpt a statue of gold, and ascend through a toilet, which is ironic when they pee their pants dodging a Dragon.

Martin Freeman is still Bilbo Baggins, Richard Armitage is still Thorin BadMotorScooter, Gandalf is still badass, and everyone else is still everyone else. We are thrown into the adventure headfirst after a short flashback prelude between Gandalf (Ian McKellen) and Thorin at The Prancing Pony (a familiar tavern from THE FELLOWSHIP OF THE RING … or at least, it will be a familiar tavern… uh, in the future). No time for foreplay as this movie – like that other middle movie, THE TWO TOWERS – is a continuance, and expects us to know our wood elves from our cave trolls. Consequently, there is barely time for characterization, as the action sequences pile on top of us like wood elves and cave trolls.

Director Peter Jackson continues his epic fairy tale with THE HOBBIT: THE DESOLATION OF SMAUG, the second part of a trilogy of films crafted around J.R.R. Tolkien’s small book, The Hobbit, or There and Back Again. Once again, it’s a monumental imagining of a fantasy world that has, up to now, only been envisioned dimly in cartoons. Jackson unveils his glorious, authentic realization of a mythic world – and it makes me wonder how many hugs some people missed as children when they refuse to accept this wondrous filmic escapism for what it is, and nag nag nag that it’s  “not like the book” and nitpick esoteric minutiae.As John Wayne once said, “No one should go to the movies unless they believe in heroes.” And special effects.

And since when have books been so sacred to you people, who would rather toggle a first-person shooter than sit in the sunlight, open a thing with pages and drink in its wonder? Jackson and co-writers Fran Walsh, Philippa Boyens and Guillermo del Toro (yes, that guy) have departed from Tolkien’s words considerably, but unlike some hubristic cave trolls who deign to rewrite Stephen King or Philip K. Dick, Jackson has transmorphed Tolkien’s 1930’s sensibility for a 21st century audience. His “dramatic license” keeps the tale kinetic, entertaining and – sexy.

As Liv Tyler balanced out the swimming testosterone in the LOTR series, here the sausage-fest is mitigated by the sunsparkle of Evangeline Lilly as Elf Tauriel, the most beautiful woman on Earth in this epoch (either that, or I’m looking at Orlando Bloom). Battle dynamism, magnificent bow-and-dagger choreography, sweeping arcs of dying Orcs, sex-on-the-hoof killing machine, tresses like fountains of chocolate cascading waterfall over leaf-green shoulders, opaline eyes, aquiline nose, cheekbones like battle daggers – and look! She has Steven Tyler’s lips!

Tolkien was a master tale-teller, but a product of his time, paying little pc attention to the raging homoerotic overtones of his man-quests, so Tauriel is pure invention from one of the master tale-tellers of our time.

And with Tauriel comes – Legolas! We are home again, as Orlando Bloom reprises his role as Elfin archer and Aragorn’s love interest from the LOTR movies. At one point, Legolas asks a Dwarf about an amulet that he carries, “And who is that?” The Dwarf answers, “My son, Gimli” (who, of course, would become grudging battle compatriot of Legolas in the RINGS trilogy, and the third side in the love-triangle between Aragorn and Legolas).

Dwarf Kili (Aidan Turner), voted Middle Earth People Magazine’s Sexiest Dwarf Alive, channels David Cassidy so much that Tauriel’s ears get pointier for him – but she’s Legolas’s lass! Not to worry, parents, as this love triangle is barely consummated with a few glances and spoken words between the three, rather than Legolas busting in on Tauriel and Kili doing it cave troll style. Later, Kili, though injured, shows he still got game, when Tauriel fights through Orcs to be at his side and cure him, saying to her in a delirious whisper, “You can’t be her – she walks a thousand miles away in starlight…” (Chicks – they’ll believe aything!) As his fingers cautiously intertwine with hers, “Do you think she could have loved me?” By now her little Elf-knickers have greened many times over, as she looks down at him – at us –  offering a tentative smile… it’s such a “moment” that it woke up my cave troll.

Gandalf is SUCH a badass!

After warding off Orc attacks from the Villain From The Previous Movie (Azog, a CGI bovver boy with magnificent trapezius), Gandalf tells Thorin to summon a meeting between the Seven Dwarf Kingdoms – waitaminute, are they having a laugh? You mean Snow White’s Seven Dwarfs own some kingdoms? No, dummy, seven Dwarf kingdoms! Oh, you mean seven teeny tiny kingdoms?… No, normal-sized kingdoms populated with Dwarfs! Uh, then how do the Dwarfs reach the doorknobs?… 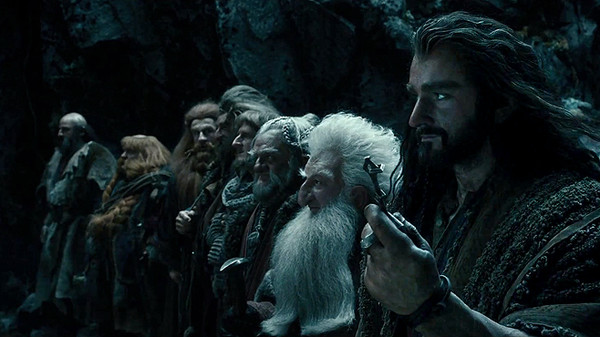 Gandalf leaves the Dwarfs and Bilbo at the edge of Mirkwood Forest, to go do some other wizarding things, like washing his burlap robe before it starts standing up by itself without magic, entreating them, “Do not leave the path or you will never find it again.” After leaving the path and finding it again, they are captured by the Elves. Oh, my love thrums for those tresses like fountains cascading waterfall over leaf-green shoulders, opaline eyes, aquiline nose, cheekbones like battle daggers – wait, that’s Legolas’s father, Thranduil (Lee Pace).

Escape from the blond beauties, the Dwarfs smuggle themselves into Laketown, via a handsome ferryman named Bard (Luke Evans, Zeus in IMMORTALS), where they meet the crusty Stephen Fry in an eccentric performance as the despot king.

Like TWO TOWERS, DESOLATION splits our heroes into three factions: the Dwarfs and Bilbo at Lonely Mountain, Dwarfs and Elves at Laketown (where it is implied that only Bard has the means to destroy the impending Dragon), and Gandalf’s wizarding solo tour.

At this point, some of the critique against DESOLATION OF SMAUG gains weight: LORD OF THE RINGS was an epic tale because nothing less than the future of Middle Earth was at stake; THE HOBBIT is being made into an epic tale, even though all that’s at stake is one Lonely Mountain. And right about the third act, we start to feel the breadth of the tale not matching the stakes. For example, why are the Orcs still obsessively pursuing the Dwarfs? Why is Legolas obsessively pursuing the Orcs? Why is Gandalf badassing about by himself? And why isn’t Kili going cave troll on Tauriel?

And if the Dwarfs fail in their quest, well, it’s just a few Dwarfs failing to take back their literal mountain of gold coins and jewelry. Huh, not so much empathetic support now for these Wall Street pricks, I’ll wager. Thorin even does a Mitt Romney and starts treating Bilbo like the 47%, as if Bilbo owes it to the Dwarfs to sneak into the gold chamber and grab their Arkenstone (for a reason yet to be established by logic or physics).

Another irksome aspect is all the action sequences where each Dwarf is as adept as a superspy. During the barrel ride, Orcs come blazing at them from all sides, yet all these faceless glorified extras display a killing proficiency that rivals Tom Cruise in MISSION IMPOSSIBLE II – even Bombur the fatty-fatty-boomsticks! (Okay, maybe they’re well trained, but when they’re all running from danger in a group, they all run at the same speed, even the fatty-fatty-boomsticks! Is Middle Earth gravity different from Earth’s? When they all fall from a great height, not only are none of them hurt, but you would think that Bombur’s obesity would affect him more adversely than the rest, but no, he gets up just as quickly as the others and keeps running!) These action scenes – though excellently choreographed, especially the inspiring killing skills of the Elves – have to be this outlandish because they are couched in this supposed “epic” – but we’ve just discerned the overarching tale itself as not really that epic, so in the end the action scenes are another dissonant chord in the movie’s tone.

But this is why THE DESOLATION OF SMAUG shines like a cerulean Arkenstone amongst a sea of blood gold:

The One Ring [insert Howard Shore’s eerily hypnotic Ring theme that calms us, yet scares us, that seduces yet repulses, that sings high in our temples, yet my precious… my preciousssssss….].

The effect of the Ring features heavily in this episode; the fingerband of gold with the power to turn its wearer invisible that Bilbo found in the Goblin cave (and that he keeps secret from everyone) is starting to affect his psyche. The more he uses it, the more adverse its effect on him, never more artfully rendered than in one startling moment, when he pulls the Ring off his finger, becomes visible again, and has to clap his hand over his mouth in terror to stop himself from screaming. That one second is what this movie was made for; Martin Freeman’s acting chops could rise no higher, wrenching a look of brain-damaging horror and confusion across his face as his panicked eyes regard the “wrongness” of The Ring.

Smaug the Dragon – that’s what you’ve been waiting for, right? After that sensational giant dragon at the end of HOW TO TRAIN YOUR DRAGON, Smaug better be ultra-cosmo! We know one thing about him – he’s got a gold fetish, covering himself completely in it like Scrooge McDuck. Visually, Smaug is untouchable – WETA Digital have outdone themselves – but psychologically, well, he doesn’t scare me. Because he speaks English. Like Benedict Cumberbatch. This is not Jackson’s fault, as Smaug was given dialogue by Tolkien, but when will fantasy writers realize that when animals can speak, it makes them LESS scary. Because they can be reasoned with. That’s why the dragon in HOW TO TRAIN was actually scarier. It was a dumb animal. We are much more terrified of those things that cannot communicate in any human way, that are so animalistic their small brains simply conjure survival instincts, with no room for rational thought or communication – you know, Republicans.

The end frames are a transposition of J. Robert Oppenheimer’s reaction to unleashing the power of the atomic bomb, as the Dragon Smaug is “unleashed” by the Dwarfs and Bilbo, flying toward Laketown to fulfill the prophecy of a Lake of Fire, intoning, “I am death!” (“Now I am become Death, the destroyer of worlds,” Bhagavad Gita). And Bilbo looks upon the retreating Dragon, bereft, and echoes Oppenheimer’s next thought: “What have we done?” Crash to black.

Escape into DESOLATION. Your cave troll will thank you.