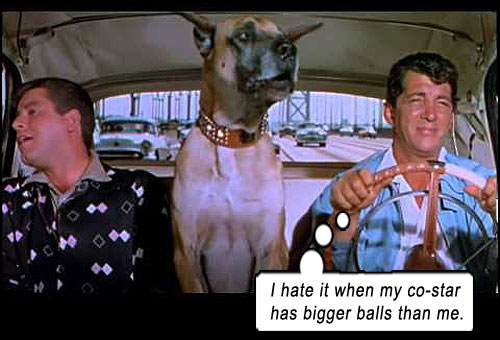 A Road Movie for the End Of The Road.

Dean walked one way, I walked the other, and we never saw each other again.
— Jerry Lewis, on the final Martin and Lewis show at the Copacabana New York, 1956.

Way back in their second film, MY FRIEND IRMA GOES WEST (Jul 1950), Dean Martin and Jerry Lewis boarded a train for Hollywood. And didn’t make it. Here, in HOLLYWOOD OR BUST (Dec 1956), they make it. And bust…

It had to happen. The last hurrah. The final Martin and Lewis movie.

A grifter, a film buff and a chorus girl are inadvertently teamed up on a road trip to Hollywood. Along the way, they discover bonds they never knew they shared, and at their destination, their dreams come true. Sounds like pap. Is. But then, every Martin-Lewis movie was never about the plot or denouement, but the gags in between. And HOLLYWOOD OR BUST, despite its many demerits, stands alongside LIVING IT UP or ARTISTS AND MODELS, as one of the best crafted Martin-Lewis movies.

Malcolm Smith (Lewis) wins a car with a lottery ticket, while grifter Steve Wiley (Martin) wins the same car with a fake duplicate ticket. The company grants them both “half-ownership” of the car, which puts a crimp in Steve’s plan to sell the car to pay off a loan shark; meanwhile, Malcolm’s plan is to drive to Hollywood to meet Anita Ekberg. Steve fully intends to start the journey with Malcolm, then dump him somewhere and sell the car. But he didn’t count on Mr. Bascom…

Mr. Bascom is Malcolm’s great dane, who would become a feature comedic foil in this movie, despite Jerry’s distaste in working with the dog. Jerry, for all his power on the sets of these successful studio movies, lost the argument with the producers to excise Mr. Bascom from the script, which leads us to speculate that of the many factors contributing to the great dane’s inclusion, maybe the Cousin Oliver Syndrome was paramount? (When Cindy Brady got too bloated to be “the cute one” anymore, the producers of THE BRADY BUNCH brought in younger Cousin Oliver to balance out the cuteness.) By the time of this 16th Martin-Lewis film, Jerry had put on some noticeable pounds (he was not the stick figure of his earlier films), and his “nine-year-old” demeanor often seemed incongruous in the carriage of this “older” man (Jerry was now 30), so Mr. Bascom was brought in to exemplify that lost innocence.

It is Mr. Bascom’s unwitting intercession that often keeps Malcolm on the road with the plotting Steve.

Along the way, the boys meet Terry (slim, pert Pat Crowley), a chorus girl/singer travelling to a job in Las Vegas. Terry’s introduction is somewhat weird: she overtakes the boys spitefully, kicking up road dust into their faces and car, then when she is later overtaken by the boys in the same manner, she exhibits outrage. I don’t get it. Double standard? Hypocrite? Later, the boys force themselves onto her to give them a lift; when her car breaks down, they ultimately all end up in the boys’ car (which is a 1956 Chrysler New Yorker convertible in salmon pink, which they called “Desert Rose”). 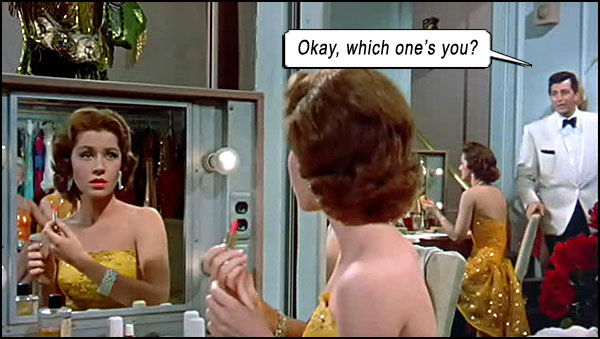 In Crowley’s first Martin-Lewis film appearance (MONEY FROM HOME, 1953), she played a strong female role and a mature love interest for Jerry; here, she is demoted to the sex-object for Dean. Women of this era were raised to believe that marriage was the pinnacle of existence, so this movie makes it seem as if Terry was only “working” as a chorus girl/singer because she hadn’t found a man yet! So many movies of this era do this that we fail to see how abominably sexist it is. After Steve wins big in Vegas, Terry’s job becomes irrelevant as Steve describes the life HE has laid out for them: marriage and babies. When Steve realizes Malcolm has lost their winnings, he dumps Terry. She has no say in the matter. She half-heartedly resumes her singing career in a studio, until Steve snatches her from the jaws of despair once again after he makes bank. So: money = marriage = no female career necessary, not even if you wanted one!

Then there is Anita Ekberg. After a small part in Martin-Lewis’s ARTISTS AND MODELS, she plays herself here – but in the opening, she is seen posing alongside the credits in various outfits. Just standing and smiling. Doing nothing except being eye candy. Whew! The sexism was so obvious, it’s a wonder it took over 60 years to expose Harvey Weinstein.

Written by Erna Lazarus and directed/co-written by Frank Tashlin (the second and last of his Martin-Lewis output, though he would go on to direct many of Jerry’s solo projects), HOLLYWOOD OR BUST is not just sexist – it’s racist too! I’m not one to go full SJW, but I can see what might get the SJWs up in arms: during the cold open, Jerry mimics people from various cultures in a movie theater, as Dean narrates. It’s racist as hell, but back then it was simply called comedy.

Dean’s characters usually arc from intolerance to acceptance of Jerry’s characters (and always with an amount of grifting to serve himself), but here, he actually risks his life to save Jerry’s, which is more than he’s ever done in any other movie. After Malcolm discovers he is in a bull pen to get milk (“Uh, excuse me, sir, I just came to see your wife”), he taunts the bull like a matador with his high-pitched caterwauling (which kills me! Classic Jerry!), then he stumbles, and Steve jumps the fence while the bull charges, pulling Malcolm to safety, and proving his seemingly selfish grifter has a heart of gold.

Again, it’s a testament to Dean’s stellar acting ability that their movie chemistry works so well, because by now Dean HATED Jerry, at one point during this shoot telling him, “You’re nothing but a dollar sign to me!”

Yet Dean turned down the next planned Martin-Lewis movie (which Jerry was prepping) thereby sealing the breakup. The movie would feature Jerry as a troubled street kid and Dean as his mentor cop, but Dean roundly refused to play a policeman, and the part ultimately went to Darren McGavin. With longtime producer Hal Wallis sick of headbutting Jerry, Jerry would produce the movie himself, and it would become the first solo Jerry Lewis picture after the Martin-Lewis breakup – THE DELICATE DELINQUENT (1957).

Whereas Jerry was exploring juvenile delinquency, Dean was more prosaic with his next project, never wanting to stray too far from the simplistic formula that rocketed him to the top of the entertainment world. The romantic comedy 10,000 BEDROOMS suited Dean’s persona and laid-back work ethic just fine… Thus, both Dean and Jerry followed the paths they desired, had their partner not been an obstacle – Jerry into introspective “Chaplin shit,” and Dean phoning it in drunk and sexy. 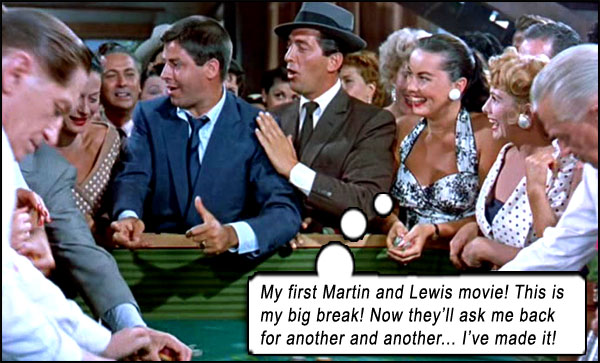 The trio arrive in Vegas (driving past a marquee advertising Dean Martin and Jerry Lewis!) where Malcolm gets his “lucky feeling,” for one of the film’s best bits at the gambling table. In MONEY FROM HOME, Dean got “that lucky feelin’ right in the seat of my pants” (yes, I bit my tongue too!), but here, Jerry’s “lucky feeling” is a much more practiced visual set of symptoms: “… the itching and the twitching and the jerking…” They both have suits on in this sequence, looking very much “equal” for the first time in their cinematic career since THE CADDY (1953).

They make it in the end. They’re movie stars, premiering at Grauman’s Chinese Theater, right there on 6925 Hollywood Boulevard. The last big musical number, Hollywood Or Bust, accompanies them, with Pat Crowley on Dean’s arm, Ekberg on Jerry’s arm, both wearing identical navy blue suits. They both get the girls, they both get the stardom, all walking toward camera, singing the final chorus as Dean and Jerry angle their heads in towards the lens and fade to black. It’s a glorious outro, a fitting end in retrospect. Probably fortuitous that they broke up when they did – young enough to become legends (Jerry, 30, Dean, 39), not so old that they destroyed their legacy.

While Abbot and Costello made their 36th and last feature film at United Artists (DANCE WITH ME HENRY, Dec 1956), Martin and Lewis were making this, their 16th and final film over at Paramount. While Abbot and Costello were at the end of their acting careers, Martin and Lewis’s were about to go shooting in different directions, Martin running with Frank Sinatra’s Rat Pack and Lewis becoming a renowned writer-director-star.

HOLLYWOOD OR BUST was released five months after Martin and Lewis shook hands for the final time at the Copacabana in New York (July 1956) and exited off either side of the stage, never to perform together again. It’s an eternal regret and sadness to the world that times were different and “reunions” were not the money-makers they are today. Martin and Lewis would never be onstage or film together again – except for one sparkling awkward moment on Jerry’s 1976 MDA Telethon, when Frank Sinatra would bring them together because, “It’s been too long.” According to Jerry, after that meeting they would speak on the telephone a few times and then meet maybe two or three times again in their lives, but it was nothing substantial. Yet Jerry, to the very end, would continue to claim there was great love between the pair. (Immediately after the breakup, Lewis told the press: “For the first time in 10 years, I am rid of a cancer.” Great love.)

3 Comments on “HOLLYWOOD OR BUST”