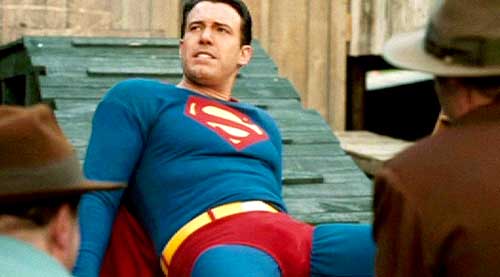 “Phew, that barn roof is unforgiving…”

As Powerful as a Locomotive.

The posters to HOLLYWOODLAND do nothing to alert us to the movie’s startling subject matter – Ben Affleck in red grandma-panties.

Set in 1959, tracing the ripples in pop culture following the mysterious death of TV’s most famous Superman, George Reeves, writer Paul Bernbaum and director Allen Coulter (THE SOPRANOS, SEX AND THE CITY) embark on a RASHOMON-like journey to tease out various scenarios that might have contributed to Reeves’ untimely demise.

And Ben Affleck is George Reeves. As they say in Joisey: “Who woulda thought?!” – Matt Damon’s wife as The Man of Steel!

But Affleck makes it work. With a snake-charmer’s smirk and a square-jawed irony, his Reeves shoulder-rubs high society doggedly enough to enamor a studio head’s wife, Toni Mannix (Diane Lane), whom he believes will further his flagging acting career, but who makes him merely her “kept man” – even whilst his star rises as television’s Superman to the point where his typecasting makes working in other films nigh impossible (“Hey! There’s Superman talking to Burt Lancaster in FROM HERE TO ETERNITY!”) 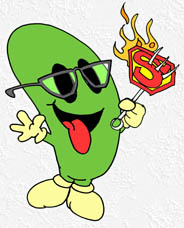 Put another S on the Barbie! 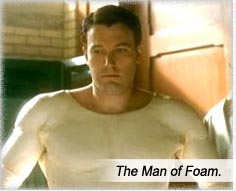 Three relationships (in this movie’s telling at least) drive Reeves toward an inexorable fate: that between him and his unsatisfied girlfriend, Leonore (Robin Tunney); between him and the studio head, Eddie Mannix (Bob Hoskins in full throttle CEO-gangster drive), whose tacit knowledge of his wife’s affair with Reeves makes for a knife-edge uneasiness on Reeves’ part – especially whilst sharing a dinner table with Eddie and his lover; and between Reeves and his own alter ego.

Why the movie is called “Hollywoodland” remains a mystery; its allusion to the famous Hollywoodland sign which once stood atop Mt. Lee in the Hollywood Hills (refurbished and shortened to “Hollywood” in 1949, ten years before Reeves’ death) is abstruse, and though the argument could be made that the title is to conjure those maddeningly ephemeral glamour days that modernites seem to remember only through rose-colored pill bottles, it seems more likely that it was merely a bad second choice after the Superman owners refused to allow the film-makers to use their original title, TRUTH, JUSTICE AND THE AMERICAN WAY (an infinitely more suitable nod to this movie’s themes).

HOLLYWOODLAND delves deeper than the rosy nostalgia, teetering on noir (itself a glamorization of a bygone era), presenting a more realistically rendered underbelly of the entertainment industry than is usually reminisced when regarding the Reeves SUPERMAN era. It makes no claims to accuracy (we see Reeves in a promotional video cringing in pain from his acrobatics, which did not happen; we see him barbecuing his Superman suit in frustration, which he did not do – “You’ll believe a man can FRY”?), though it does give us brief glimpses into Reeves’ well-reported attitudes regarding his “monkey suit” and conversely how he took his role as seriously as a real superhuman crimefighter when appearing around kids.

The film plays out the apocryphal tale of the kid who pointed a real gun at Superman and asked to shoot him. Reeves deflates the situation by warning that the bullet may bounce off him and hurt someone else. If I was that kid, I would have retorted, “But you’re faster than a speeding bullet – you can save them!”

Almost miscast amongst the skinny-tie-wearing private dicks and FBI reservoir dogs, Adrien Brody‘s subtly humorous performance (as investigator Louis Simo) is a standout feature of the film, as he balances his scared-hair comedic presence alongside confused fatherly love for his son who is shattered by “Superman’s” death. (Have they isolated that mischievous gene that made every 1950s American kid’s ears stick out like that?) Simo’s character is “dramatic license” in action, as the circumstances surrounding any private investigations into Reeves’ death were never as blasé as Simo’s.

Performances are so consistently good that even throwing Dash Mihok into the mix does not phase the quality; his informant sergeant role is tackled with great maturity.

Not being a biopic, HOLLYWOODLAND does not focus on Reeves as Superman for more than five minutes total screentime; don’t take the kids if all they want to see is a guy swishing about in a red cape and red grandma-panties – they’d more likely see that guy at the next gay mardi gras than in this film. More an intriguing thriller, the mystery of Reeves’ death is never solved (in the film at least) and the three relationships which might have prompted his demise are all given persuasive treatments.

More compelling than the last few Affleck movies combined (GIGLI, SURVIVING CHRISTMAS, DAREDEVIL), HOLLYWOODLAND, though it is frightfully un-real, illustrates how frightening the game of public persona comes to be. As Eddie Mannix’s aide chillingly reminds Simo as he delves for the truth, “When it comes to publicity, what’s true or false doesn’t matter.”

Truth, Justice, the American Way itself have always been subsumed by Hollywoodland.

imdb
Word Count: 900      No. 158
Fact versus Fiction in
Hollywoodland.
(From the George Reeves fan website, “The Adventure Continues.”)