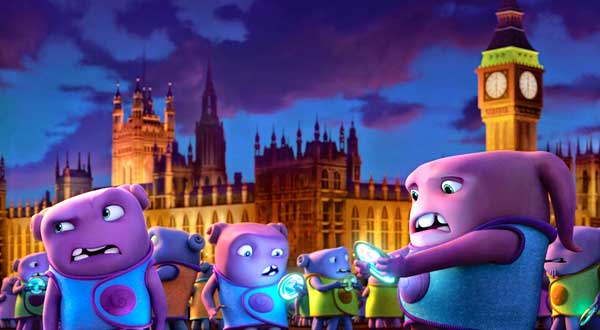 When the aliens do the deporting…

A misfit extraterrestrial alien teams with a human youth to repel a hostile alien race from Earth — OR — Confused screenwriters Tom J. Astle and Matt Ember write a parable about aliens and humans working together to repel an alien invasion – even though the alien working with the human has just invaded Earth with his own race!

Directed by Tim Johnson (OVER THE HEDGE), from a book by Adam Rex (The True Meaning Of Smekday), the road-and-redemption movie HOME is one of those animated kid’s comedies incognizant of how contradictory its mixed messages are, hiding behind its demographic as excuse.

An alien named Oh (voice of Jim Parsons, THE BIG BANG THEORY) lands in North America with his race of Boov, led by Captain Smek (Steve Martin). They’re doing what they do best – running away. From a hostile race called the Gorg. They’ve found a new planet to call home – Earth. Rather than co-existing with humans, they enact “friendly invasion” – forcefully transporting all humans to Australia to live in Boov-created crowded communities, so that the Boov can live in the fully-furnished homes in the rest of the world. Immediately there’s a contradiction: if the Boov can create housing so instantaneously for the deported people, why not create those communities for themselves instead?! It would negate the need for the resource-heavy infrastructure required to relocate millions of humans.

Secondly, since when is any invasion “friendly”? Sounds like Orwellian thoughtpolice agitprop to me. And the humans all go quietly. Where are the chickenhawks who want to bomb every threat? Where are the military? Where the fuck is Dick Cheney the murderous swine when we really need him? What about the normal human reaction to being forced out of your home, your job, your country? No one seems to mind, as the story immediately turns its attention to Oh and his decidedly human trait of craving acceptance. But his race has NO COMMUNAL TRAITS, at least, that’s implied by a Boov replying to Oh’s suggestion of a party, “Boov do not party.” That means Oh is a deviant, an aberration in his species to desire these “human” dalliances.

On an on these contradictions flow in this DreamWorks dud, negating the wonderful technical achievement of the animation, the creativity of design, the funny ideas and attention to detail in the background.

Oh becomes a fugitive from his own race when he sends out an invite to his house-warming party to ALL, including the Gorg, who can now track the Boov to Earth.

Oh runs into a fugitive girl named Tip (voice of Rihanna), who escaped the deportation with her cat, Pig; an animal we clearly see as the device to add cuteness to the absolutely uncute Tip. Tip and Oh team up to achieve what they each want – she to find her mother in Australia, and Oh to use Tip’s transport to remain on the lam. Here is another flimsy plot line: Oh doesn’t need Tip at all – as he built her flying car, meaning he can build one at any time and hi-tail it to Antarctica, his goal; he keeps trying to steal her car and ditch her (which is not a savory trait for a cartoon character in a kid’s film), but the fact remains that she needs him desperately (to compute finding her mother amongst 1 billion refugees in an internment camp), but he can easily walk away from her. So there is no reason for both of them to become closer as friends or refugee partners. Yet they do, because – Screenwriting 101. 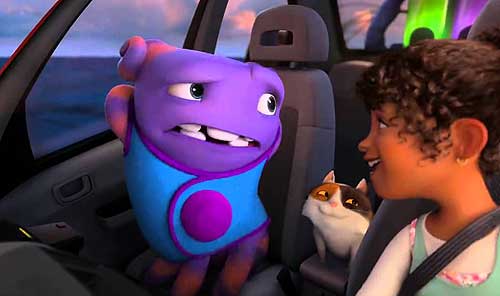 Steve Martin pulls a funny performance as the bulbous buffoon Captain Smek, openly proud of his cowardice, regarded as a prime trait in the Boov. Rihanna’s expressionless voice keeps her character as dull as her songs, which we are subjected to at regular intervals to keep us nauseous. Jennifer Lopez is Tip’s mother, for no discernible reason other than marquee value. And Oh’s character sounds like David Cross.

The message is to fight for your individuality – as evidenced by Oh continually going against the grain of his incurious species – yet the movie summarily dismisses the whole human race as subservient enough to accept their communistic fate without complaint. Why aren’t THEY fighting for their individuality? When Tip is reunited with her mum, there is NO TALK AT ALL of “How are we gonna defeat these aliens who deported us?” or “We need to band together and overthrow these little purple bastards!” or “We’ve got to find Dick Cheney to make war for a REAL reason…” Of course, knowing Dick Cheney, he prides himself on being more cowardly than Captain Smek, so probably in an underground bunker somewhere rimming the president and begging not to be sent outside.

When Oh is facing down the alien Gorg ship, everyone is rooting for him – humans in the movie and the audience alike – but even when he saves the day and the Gorg depart – there is still the Boov civilization left on Earth, and they’ve effectively conquered the human race!

Here’s another gigantic plot stupidity: turns out the Gorg race is merely one cute pulpy starfish housed within a fierce-looking exoskeleton, who was always pursuing the Boov only to retrieve a rock of his that the Boov had in their possession. The seeds of Starfish’s whole race are in that rock, that Oh returns to him.  Starfish thanks Oh and departs. THUS: whom we thought was the villain was merely trying to save his species – MEANWHILE – the Boov actually invaded Earth – and they’re the good guys?

HOME is super tooty colors and frenetic action, with bubble characters running around on quintuple feet; they’re hugable and marketable, so the kids will love it, through all the plot discrepancies that leap at adults like fingernails down a blackboard.

The small annoyances are just as bad: