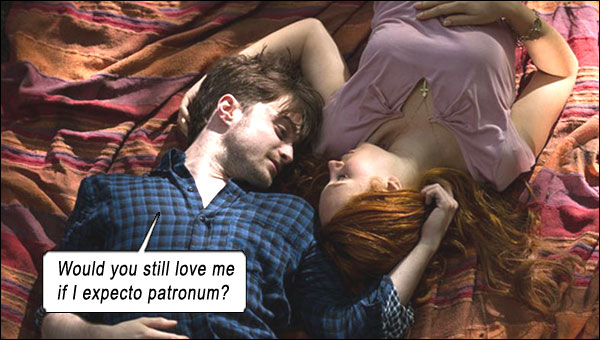 Harry Potter and the Horns of Dilemma.

Soon after the mysterious death of his girlfriend, Ig Perrish wakes to find two horns growing out of his forehead. He realizes people are revealing their innermost secrets to him, and Ig figures it must be due to the horns, which no one gives any undue notice. He realizes he can use this bizarre power to hunt down his girlfriend’s killer.

A supernatural murder mystery, with lots of red herrings and lots of red devils, HORNS is a sui generis black comedy from the mind of Joe Hill, the son of Stephen King. Taken from Hill’s novel of the same name, screenwriter Kevin Bunin and director Alexandre Aja craft a compelling tale of intrigue in a small logging town, but cannot sustain the film’s original tone into the third act, which gets caught up in questionable special effects that temper the unique storytelling and well-constructed pacing.

Movie opens with Ig (Daniel Radcliffe) and his girl Merrin (Juno Temple) sharing a romantic moment under a tree. Next thing he knows, Ig is waking up at his place, groggy drunk, with an angry mob outside blaming him for the murder of Merrin.

After Ig spends a bitter night with a barmaid (Kelli Garner), he wakes to find he has sprouted small devil-like horns. Suddenly the barmaid is pigging out on a box of donuts, telling him she’d like to get really fat because people think she’s trash and have to get drunk to sleep with her. Ooookay… we can chalk that one up to chicks being chicks, but then…

When Ig visits a doctor’s office to see about the horns, a waiting patient tells him she’d like to “kick my daughter right in her spoiled ass, and divorce my husband so I could fuck my golf pro again. I’ve never been with a jigaboo before!” Now that’s deeper than chick crazy. The nurse and doctor are no better, confessing deep-rooted fantasies to Ig. In a fit of desperation, Ig tells the doctor to saw off the horns – and wakes from his anesthetic to find the doctor and nurse having sex, with the saw stuck mid-cut through one of his horns! And they’re getting bigger.

While under anesthetic, Ig flashbacks to when he was a little boy meeting Merrin for the first time – but we already know what Daniel Radcliffe looks like as a little boy – and young Ig doesn’t look one bit like Harry Potter!

As Ig’s quest progresses, snakes now drape themselves around him. The priest tells Ig to kill himself, the bartender wants to burn his bar down for the insurance, his own mother (Kathleen Quinlan) spews vitriol at Ig blaming him for the murder, and Merrin’s father (the great David Morse) wants to shoot Ig. The only person who seems sane and unaffected is Ig’s lawyer friend Lee (Max Minghella), who can’t see the horns: “Maybe the horns don’t work on good people…” 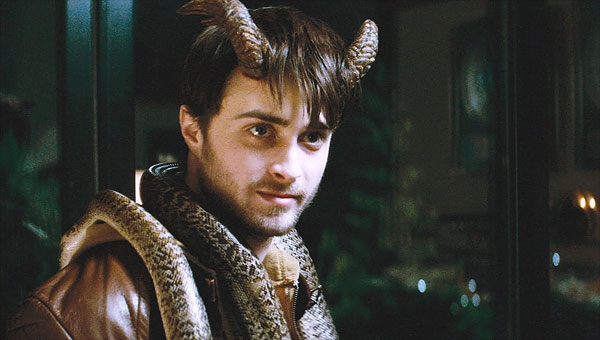 When a feather boa is REALLY a boa.

Underscored by a great rock soundtrack (Bowie’s Heroes, Pixies’ Where Is My Mind, Manson’s Personal Jesus, Wanton Bishops’ Sleep With The Lights On), movie is filled with flashbacks that explore Ig’s and Merrin’s relationship and how it might have led to her death. The breakup scene is so real it’s uncomfortable. Fellas, watch carefully: this is how every woman you are madly in love with is going to come at you – suddenly, irrationally, and when you think everything is going swimmingly; there will be a moment when you wonder exactly who you are talking to and how this person got into your girlfriend’s body and mind. But there is another compelling layer here, that Ig (and we the viewers) will find out too late.

Climax finds Ig turning into a giant red devil, rendered so poorly that Hogwarts called and said they’d lend the movie an Expecto Patronus. Final scene repeats the opening scene, showing Ig and Merrin under that tree together, implying this was the final scene all along; implying they are together in death… implying that if devils exist, then so do ghosts reuniting, wearing ghost clothes lying on ghost grass, ending in ghost sex. (Does this make – ghost babies?)

In his quest to break away from Harry, Daniel Radcliffe does a commendable job. (Remember, the last POTTER film was a mere two years ago, 2011. Radcliffe accepted THE WOMAN IN BLACK (2012) directly after THE DEATHLY HALLOWS: PART 2 (2011) in a blatant attempt to re-cast his goodboy image – although choosing that film about ghosts thankfully didn’t backfire). The whole cast are ensconced in their tragic roles – except for Max Minghella, who seems miscast and oddly detached, as Ig’s friend and as an actor in the movie.

Movie is so enjoyable because it doesn’t explore anything deeper than Ig’s revenge quest and the power of suggestion and confession that the horns seem to convey. There is no moral questioning of whether Ig is doing the right thing using his powers to make two officers have homo sex, or whether he should kill the real killer of Merrin. That is, movie is devoid of that weary pondering: Just because someone CAN do something, SHOULD they?

That’s what makes HORNS a devil of a film!