Well, two out of three ain’t bad. Two out of three HORRIBLE BOSSES, that is. There’s Kevin Spacey as Boss #1, reprising his role from SWIMMING WITH SHARKS as pure A-Hole; there’s Colin Farrell as Boss #2, creating an eccentric new role for himself as a balding, paunched lunatic. And there’s Jennifer Aniston as Boss #3, supposedly a horrible boss because she’s sexually aggressive towards her male employee – but really! What world are we living in, fellas, where Jennifer Aniston making overt advances on your member is a bad thing? 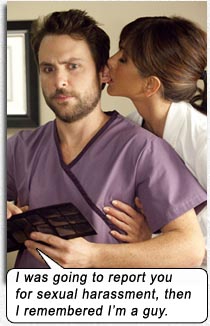 In this attempt at black comedy, Jason Bateman, Jason Sudeikis and Charlie Day are three wimpy friends who have had enough of their horrible bosses and wish they had the balls to kill them.

Yes, this movie has no balls.

Flailing for solutions, they meet “murder consultant” Motherfucker Jones (Jamie Foxx, doing his best Black Man, even though he’s been white since 2005), who advises them of the STRANGERS ON A TRAIN method: each of them kill the others’ boss, so there will seemingly be no motives.

For good measure, someone mentions THROW MOMMA FROM THE TRAIN (the 1987 comedy reimagining of Hitchcock’s 1951 STRANGERS). There’s a strange self-referential thing going on here, as Charlie Day notes, “Yeah, that movie with Danny DeVito!” and he’s with DeVito every week in TV’s IT’S ALWAYS SUNNY IN PHILADELPHIA. (The fingernails-down-a-blackboard prize must surely go to this movie’s casting agency; of the three unbearably annoying guys on SUNNY IN PHILADELPHIA, for this movie, they cast the most annoying.)

So Aniston’s character is a hottie because if she was a fat ugly gunt, that would, ironically, be insulting to the fat ugly gunt (“oh, he’s only turning her down because she’s fat and he’s shallow!”). The only way a man can win against this egregiously acceptable double standard is to be hot. Let’s face it, ladies: if a beautiful man (say, Channing Tatum, Ryan Phillipe, Brad Pitt, Bradley Cooper) were harassing you for a date, dropping innuendo or complimenting you excessively in the quest for panty, you wouldn’t have any complaints; it’s only when the Danny DeVitos, Nick Noltes or Herman Cains drop hints that suddenly your panties are sacred and you’re a “victim” of sexual molestation.

Main reason HORRIBLE BOSSES doesn’t work: Hot Women Are Not Funny. And Hot Nympho Women are a notch above Hot Women. What man is going to burst out laughing when he’s busy surreptitiously trying to unzip his pants in the darkness of a movie theater? Laughing would only get him busted. Bateman and Sudeikis have a few funny moments with their bosses, but Charlie Day’s harassment by Aniston gluts the senses of every male who is fantasizing about what he’d do in Day’s position: The things we could do with that flat stomach and black lingerie and banana-gulping mouth… Horrible, just horrible.

Seth Gordon (FOUR CHRISTMASES) directs, from an overwritten script by three writers who should have had a horrible boss to keep them on track.