HORSEMEN’s revelation is its downfall.

Galloping over dell and dale comes HORSEMEN, one of those derivative films that makes you wish you were watching some of the films it was derived from. 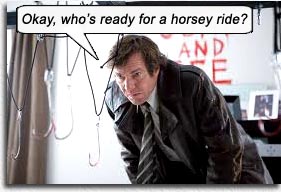 Music video director Jonas Åkerlund (Metallica, Madonna) helms this murder mystery surrounding bizarre torture-killings, involving Biblical messages, horrifying surgical procedures on conscious victims, custom-designed bondage devices and a smug person in a jail cell consulted for clues. It starts out very promising, but takes an inane turn for its pat resolution that seems like writer Dave Callaham used the dartboard approach to decide the killer (i.e. he pasted all the characters onto a dartboard and threw a dart at it, blindfolded of course).

Think: SEVEN meets SILENCE OF THE LAMBS. A little bit of SAW and any given JASON movie thrown in. Then dilute and turn down the heat until you get a milky paste with no nutrition and very few meaty bits.

Dennis Quaid puts in a sincere performance as detective Breslin, seemingly the only guy with any brains on this case. Clifton Collins Jr, and Barry Shabaka Henley are his cop aides who just spew details at him. Breslin realizes the killings are in homage to The Book of Revelations, vis a vis The Four Horsemen of the Apocalypse: War, Famine, Pestilence, Death. And what pretty horseys: red, white, black and pale. (I guess ‘pale’ was a color when you lived through a few Bubonic Plagues.)

Breslin thankfully clarifies what “apocalypse” means – it’s a pet peeve of mine that movies constantly misuse the word to denote “holocaust” or “the end of the world.” Translated literally, it simply means a “lifting of the veil” a “revelation.” Due to the word being used in the Book of Revelations, which described the end of the world (Armageddon), it has become synonymous with Armageddon.

Whereas giving a character a backstory usually aids their development and storyline, making Breslin a harried widower who neglects his sons, simply drags us into a subplot that won’t quit annoying us. Whenever Breslin promises his sons an outing and his cellphone rings, we just know he’s about to be called away, and we’re going to be treated to the disappointed looks of his progeny. And there are the “exposition” shouting matches about the mother’s cancer, and who was at the bedside and who wasn’t. Strangely, one of his sons (Lou Taylor Pucci) features in the movie’s weak climax – the accidental target on the writer’s dartboard.

Ziyi Zhang reveals herself as one of the Horsemen killers kinda early in the movie. But it’s quite a shock – any time someone holds up a bloodied bag with a fetus inside, I don’t care who you are, the hairs on your arms reach for the sky. She becomes the Lecter trope, advising Breslin from behind bars. Movie takes inane turns from here, introducing new themes and avenues – “We are the Nothing,” “the rider of the white horse; you don’t find someone like that, they find you” – but all these smug riddles from her amount to nothing in the plot.

When babyface Patrick Fugit (young writer in ALMOST FAMOUS) starts stabbing thugs in parking lots, movie derails completely. You lost me at ‘surgically adept gay sacrificial killer with a death wish on his straight brother for his parents favoring that brother.’ If that ain’t a Revelation, I’m selling my colored horsey herd.

Just like Revelations in the Bible was meant to be the final fist-up climax and instead ended up just a load of bluster that meant nothing, so too does the revelation in HORSEMEN fail to impact. “And I looked and behold a pale horse: and his name that sat on him was Death. And hell followed with him.” But not like Wyatt Earp or a Balrog. More like a pointless resolution to a movie that spent so much time building tension and suspense and blowing it in its last minutes. Now go watch SEVEN.