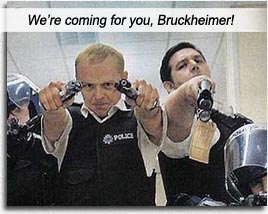 In 2004, the zombie comedy (“zomedy”?), SHAUN OF THE DEAD, hit us like a shovel to the face. HOT FUZZ is like that same shovel – to the bollocks. Harder, heavier, grittier and gruesomer than SHAUN, Brit import HOT FUZZ throws down action badder than Hollywood’s baddest bad boys – and it’s a comedy.

The same team that brought us SHAUN (writer-director Edgar Wright and writer-star Simon Pegg) have found their havoc stride with FUZZ, which does for law enforcement what SHAUN did for the dead – bring it to life just to beat the living cliché out of it.

Pegg is Nicholas Angel, a London supercop transferred by the London brass (fed up with him singlehandedly making them look bad) to an indolent Sandford village, which he treats as rigorously as London, arresting minors in the lackadaisical pub, making detailed written reports on speeders, adhering to “official vocab guidelines” and wearing his vest on foot patrol. Angel discovers just how indolent the village is when his first assignment is to chase down a swan, reported by Stephen Merchant (EXTRAS) as Mr. Peter Ian Staker (“P.I. Staker? Piss taker? Oh, come on!”). 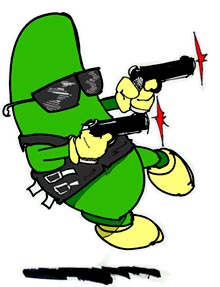 Ragged by fellow officers for his big-city élan and partnered with plump, oblivious action-movie fan, Danny (Nick Frost), Angel becomes dubious over the village’s drowsy façade after three Sandford residents have fatal “accidents.” His friendship with Danny becomes his only lifeline as he uncovers a provincial conspiracy to retain the village’s award-winning bucolic aesthetic – through murder. [Dun dun DAAAAHH!]

Whilst paying homage to Action Film canon (John Woo, Michael Bay, Richard Donner, Clint Eastwood), Pegg and Wright’s forte is in taking the piss out of the conventions: “Is it true that there’s a point on a man’s head where if you shoot it, it will blow up?”; after a villain is dispatched into a refrigerator, “Did you tell him to cool off?”; a music swell will suddenly cut short when the action onscreen takes a turn that the audience and, it would seem, the film-makers were not expecting; or Angel will pull a rugged hero-face into the camera when he screeches a squad car to a halt – then he will pull that same face when he screeches a bicycle to a halt; or Danny badgers Angel with excitable questions that he believes a big-city cop should have lived through: “Have you ever fired two guns whilst jumping through the air?” “Ever been in a high-speed pursuit?” “Have you ever fired a gun whilst in a high speed pursuit?” – all of which happens in due course to the unsuspecting dynamic duo with film-makers’ tongues planted wickedly in cheeks.

Admittedly, it is hard to follow a surprise hit with a “planned” hit, because we the audience now expect the laughs. And we expect them with a lot more shits and giggles. (In that respect, it might almost have been favorable for FUZZ’s intended audience not to have seen SHAUN.) Suffice to say, FUZZ seems a tad more “forced” than SHAUN. It doesn’t help that American marketers insist on giving us ten different thirty-second trailers containing ten gags each, specifically to spell out that FUZZ is a comedy, to American audiences whose sensibilities have been blunted by this type of actioner that actually takes itself seriously. Thus, adding the “expectancy quotient” to the deadened “advertised gags,” we are left with an uphill battle to jocular nirvana.

Which indicates how good FUZZ is, to still pull off a goodly wallop of jock.

Oft-times, British humor does not translate well to American audiences, the prime example that bridged that gap being Monty Python. But we realize Python did not succeed entirely when supposedly reputable media like The Hollywood Reporter still employs empty vessels like Ray Bennett: “When the two start flying through the air with automatics kicking, you’d bet they would give anything to be in a Robert Rodriguez film and not in a comedy at all.” Uh – is there any point explaining parody to someone who is not equipped to comprehend it? Danny’s character almost represents the fumbling-for-apprehension American psyche, when he blurts explanations to callback gags and specifies the movies that HOT FUZZ actually spoofs.

Like SHAUN, editing is performed with the gale-force of ripping gonads, editor Chris Dickens placing FUZZ spectacularly and squarely in its actioner genre for maximum parody – if it wasn’t a comedy, it would be an A-List B-Movie.

To show us the ridiculousness of impact sounds, Wright over-uses them, with every person who enters from offscreen warranting a THOOM! and every jumpcut walloping the speakers; with each shootout, chest-throbbing gunshot foley, with each car chase, hair-pulling tire screams.

Not only do Wright and Pegg knock down movie conventions (Angel elocuting like Eastwood in avenger mode; camera swooshing around the two bad boys like Michael Bay in-de-hizz-ouse), they envelope-push social convention as well, molding Angel and Danny’s relationship into an ambiguously gay-ish interaction, yet never actually stooping to facile gay jokes, but skirting the ambiguity itself for the laughs. Angel is also the world’s first openly-atheist hero (without that fact being a plot point); there is also no female love interest forced into the plot for pap Romantic Ending Protocol.

The allusions are innumerable and definitely require a second viewing for their lightning passage (STRAW DOGS, Dire Straits’ Romeo and Juliet), but familiarity with POINT BREAK, the LETHAL WEAPONs and SHAUN OF THE DEAD itself will get you over the “British humor” hump.

And really, if you don’t get it by now, after Python and BLACK ADDER and FAWLTY TOWERS and LOCK, STOCK AND TWO SMOKING BARRELS and ALI G and EXTRAS… I have here a shovel.

Present me your bollocks.