Here’s one you can watch with a straight face, with a script so bad, even Will Ferrell wouldn’t be in it. 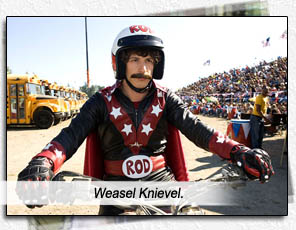 There are two laughs in HOT ROD.

1. The Punch-Dance. Stunt rider Rod “needs to go to his quiet place” and before anyone can say Kevin Bacon, he is footloosing a passionate, overwrought bodyswerve to the strains of a band who wishes they had the big-hair faux-metal chops of Europe.

2. John Farnham’s You’re The Voice. In one of those epic sequences where the star and his cohorts do The Slomo Walk down Main Street and the townsfolk follow on their heels in support, the soundtrack is the gag. How did the filmmakers even come across this Aussie recording artist? A major Australian vocalist (and a genuine talent) who shot to fame in the early ’70s covering Raindrops Keep Fallin’ On My Head, then disappeared until 1986 for The Big Comeback with You’re The Voice, John Farnham’s anthem is so bewitchingly cheesy, it leveled mountains in Switzerland.

Besides these two high points in the film – both ruined anyway with slipshod writing – the rest of the film is like choking on someone else’s vomit.

Andy Samberg is Rod, a stunt jumper who has never made a jump. Maybe it’s got something to do with the fact he’s driving a moped into the heart of darkness. Or his fake mustache. Yeh, someone actually thought that was funny. One of the instigators of comedy team The Lonely Island, Samberg is actually a funny, funny guy, but has yet to find a movie role and director that can bring out the best in him.

With only wipeouts and missed ramps under his starry belt, Rod plans for a 15-bus extravaganza – which would surely kill a lesser bad comedian, like Jason Biggs or Rob Schneider – to win the day and save his stepfather (Ian McShane, SEXY BEAST) and simultaneously wipe out cancer and whatever… Who watches these movies for plot anyway? Along the way (as usual for moronic leads in these comedies), he scores a salubrious chick (Isla Fisher), who must surely be retarded to consider swapping chromosomes with this loser. Will Arnett is Rod’s nemesis. Bill Hader and Danny McBride play the stupid supportive friends, and Jorma Taccome (also Lonely Island alum) is along for the crash-prone ride.

Sissy Spacek (CARRIE, 1976) has so little to do as Rod’s mum she almost phoned in her performance – then changed her mind and just hung up. Ian McShane must’ve lost a bet to be here.

Akiva Schaffer (the third leg of Lonely Island) is director – but helming a feature film is a far cry from Dick In A Box.