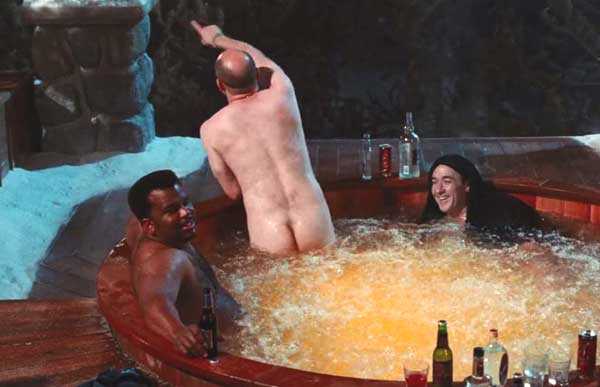 Dive in, the water’s awesome.

You might consider me ready to join my mandrill brothers on the deep side of crazy for recommending a movie with a title so obviously geared towards acutely-angled foreheads. But you would be wronger than a deep fryer bank machine. HOT TUB TIME MACHINE is the stupidest movie you will see all year. And the funniest. 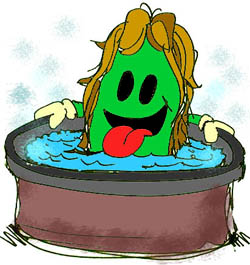 A freak time warp throws four guys (three over 40 and one 20-year-old) back in time to 1986, to re-live a halcyon weekend as their teen selves where decisions were made that shaped their destinies. They debate on whether to retrace their exact footsteps or alter their decisions to make a better tomorrow today. It would be a profound statement on the theme of reassessing your life choices with the life-knowledge you’ve earned – if it weren’t for the fact that the device that throws them into the past… is a Hot Tub Time Machine.

Not so much H.G. Wells as Marty McFly.

Elements from The Butterfly Effect (Lorenz’s theorem AND Kutcher’s theorem), Cameron’s TERMINATOR, Zemeckis’s BACK TO THE FUTURE, but mostly Ray Bradbury’s brilliant A Sound Of Thunder, revolving around the theory that one minor change in the past would radically alter future pathways… funny to think that this filthy, asinine comedy is better at illustrating Bradbury’s concept than the actual “serious” movie of that Bradbury tale, A SOUND OF THUNDER.

Adam (John Cusack), Lou (Rob Corddry) and Nick (Craig Robinson) are all living lives of quiet desperation in their 40s, while Adam’s 18-year-old nephew Jacob (Clark Duke), has NO life, living vicariously through his internet sims. 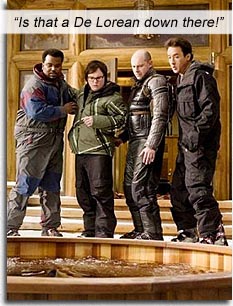 There is also a touching sub-plot of Lou being so lonely and desperate that he might have tried a suicide attempt (to the strains of Motley Crue’s Home Sweet Home), which spurs the friends to take that vacation in Kodiak Valley, their old stomping grounds. Rob Corddry found a voice in WHAT HAPPENS IN VEGAS, but was necessarily muzzled by that film’s stars, Kutcher and Diaz. Here, director Steve Pink not so much unmuzzles him, but shoots him from a cannon – drunk and naked. As the acerbic, cynical “Violator” he is unleashed to command a vast array of depravity and debauchery. I lost count of how many times we see his ass.

When the friends are back in time, we see them as their older selves (Cusack, Corddry, Robinson) – but in a mirror, they see themselves as their 18-year-old counterparts (which is how everyone else is supposedly seeing them). 18-year-old Jacob remains the same in the mirror. And Rob Corddry drops the funniest line of the movie. In response to Nick asking Jacob, “If we’re teenagers, how come you’re the same age?” Lou (Corddry) adds, “Yeah, shouldn’t you be invisible?” When a movie drops a line that was in your head exactly, that’s when you feel the concept of ‘soul mates’ or ‘elven sprites’ just might be real.

Cusack is apoplectic, “I HATE this decade!” – the obvious irony being that he himself (as a teen) was an iconic part of the cheesy teen movie revolution that carved that decade into what it was. (Surprisingly, there is no wink-wink gag of Cusack holding a boombox above his head a la SAY ANYTHING, although I really really really thought it was on the cards.)

Cultural references fly at us like sky-darkening arrows in 300, from THE SHINING to THE TERMINATOR, leg-warmers to jheri curls, from physicist Steven Hawking to poof-metal band Poison, extending even to crap like WILD HOGS. Lou, drunk on a rooftop, screams below, “Hey, John Lennon gets shot – wait, did that happen already?” And of course, shimmering, cheesy 80’s music oozing from every PA and cassette deck. Crispin Glover – as Phil the one-armed bellhop – is himself a cultural reference; he was, after all, George McFly in one of the greatest time travel experiments of all time, BACK TO THE FUTURE. 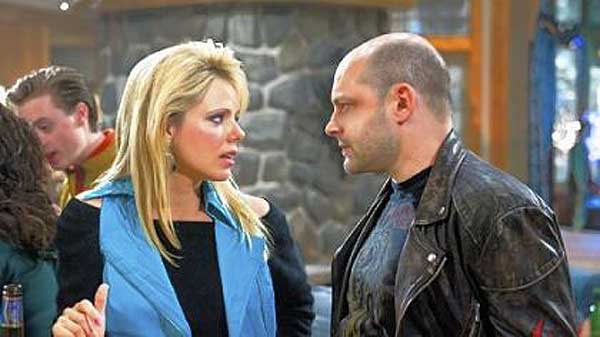 Their eyes met across a crowded space-time continuum.

When they go back to ’86, they meet Phil with two arms and are constantly presented with scenarios of him about to lose his arm. Instead of helping him retain it, they want the “time-stream” to correct itself, so merely look on expectantly waiting for it to happen. They also meet Adam’s thin young frenetic girlfriend (Lyndsy Fonseca, who breaks up with him by stabbing a fork through his eye), Collette Wolfe as Jacob’s young mom (blonde and bimbo-ish), and Lizzy Caplan as an unplanned new flame for Adam, who might alter the time-stream if he chooses her tempting warmth.

In a movie that deals with the unbelievable, the hardest physics aspect to wrap our minds around is Chevy Chase actually being funny, in a recurring cameo as the jacuzzi repair guy from beyond.

After marveling at how well HOT TUB TIME MACHINE is constructed, we realize the absurd title was conceived to slot into the willful silliness of the movie, not the other way ’round. Many movies with comic titles reveal a lame movie built around the hook of the title. Not so here – the time travel story was solidly built first and the filmmakers were obviously looking for a time travel device that would be as funny as their plot. When Craig Robinson says, “Must be some kinda… Hot Tub Time Machine,” he does a long camera-take, to drive home that they know that we know that they know how it all sounds.