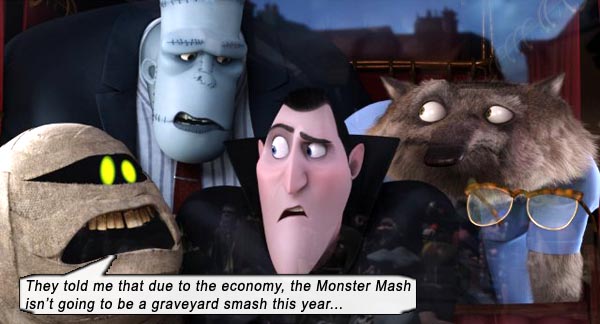 I really wanted to like HOTEL TRANSYLVANIA: an animated comedy with a cute concept (iconic screen monsters gathering at a resort set up by Dracula, far from the persecution of humans) and a simple boy-meets-girl story, featuring the talents of director Genndy Tartakovsky (the wild mind behind DEXTER’S LABORATORY and THE POWERPUFF GIRLS) and writer Robert Smigel (the insurrectionist TV FUNHOUSE and the absurdly funny YOU DON’T MESS WITH THE ZOHAN); even Adam Sandler producing and starring as the voice of Dracula didn’t turn me off, as Sandler’s recent output has been skewing towards the good side of bad.

But as it goes forward HOTEL TRANSYLVANIA goes backward, with storyline that doesn’t make sense, and arbitrary magic – that last bastion for limp storytellers – and then conveniently forgets to use that magic when it’s needed most.

Dracula (voice of Sandler) has not only created this resort for monsters as a refuge, but has concocted a fiction that all humans are bent on murderous intent toward monsters. We have no idea how he can continue to perpetuate this fiction with all the monsters that patronize his resort, because one would think that the monsters, being from the outside world, are encountering humans daily and assessing their threat level accordingly. The movie is for kids, we remind ourselves, and move onward… Drac has also instilled this irrational fear of humans in his “teen” vampire daughter Mavis (Selena Gomez), who is celebrating her 118th birthday, and wants to explore outside the stifling walls of the resort. That’s a fine ambition – but – her desire is to visit a “human village.” The illogical storyline gives us no indication how or why. Consider:

When ideological media tries to indoctrinate us on Pearl Harbor’s “surprise attack,” Columbus “discovering America,” or Barack Obama’s “death panels,” we can pore through unlimited amounts of other media to mitigate the spin. But in HOTEL TRANSYLVANIA, Mavis is never seen absorbing any contrary information to counter her father’s spin – no monsters chat with her about the outside world, she is never seen on the internet or reading a travelogue, or doing anything that would plant a seed of doubt about her father’s word. Why then, does she want to visit the human village to “make new friends”?

Turns out this human village is fake anyway – with the zombie butlers of Hotel Transylvania masquerading as bloodthirsty humans, employed by father Drac, to scare Mavis home in case she wandered outside the resort walls.

Even when Mavis returns from the village in fear, movie never once indicates she has to overcome a fear of humans. When teen Jonathan arrives (Andy Samberg) and she discovers he’s human, she still can’t wait to get it on batty-style. In other words, the filmmakers were aimlessly trying to create the trope of the sheltered princess, to no avail.

Yes, it’s for kids – but do you really want your kids exposed to this contradictory trash?

Jonathan the Valley Boy hiker stumbles upon the resort and is ordered by Dracula to pose as Mavis’s birthday party planner until Dracula can sneak him off the grounds. But Jonathan endears himself to the patrons with his down-to-earth charm (i.e. stupidity) and captures Mavis’s heart with…uh, I dunno, his stuttering excuses? His cluelessness? The fact that he carries the only properly-formed penis of all her monster acquaintances?

So though the tagline is a funny premise – “Even Monsters Need a Vacation” – the film skews to that worn chick-flick trope of teen love against all odds. Stephenie Meyer in the front row gulping down popcorn…

When Jonathan admits to Mavis that he is human, she maintains, “I still want to be with you.” Whatever that means in Disneyspeak. Is she going out in the deadly sunshine with him on picnics? Is she comfortable consuming human blood in front of him? Are they going to tell his parents she’s undead? Is this a significant leap in tolerance across species lines? Rick Santorum did warn us that tolerance for other lifestyle choices would lead to man-on-dog; did he ever foresee bat-on-dope? Undead-on-alive?

Hey, it’s for kids, which apparently means it can be illogical and stupid. Meanwhile, all that money spent on producing this swill could have been spent on your kid for a better education system and healthier food in schools…

All the OG monsters are here, those classic icons of horror that made our grandma wet her bloomers: Frankenstein (Kevin James), The Wolfman (Steve Buscemi), The Mummy (CeeLo Green), The Invisible Man (David Spade), Quasimodo (Jon Lovitz), and there is much sideshow and background creativity in all the monster-centric gags. I don’t mind so much that these once-horrifying paranormal entities are being made to look cute and silly; it’s that it is happening in this badly-written movie.

Straight from the Because-It’s-For Kids bin: Direct sunlight is fatal to vampires, so Jonathan shows Mavis a sunrise from behind a ledge – but wait – if she is in shadow, how can she possibly see the sunrise? Because It’s For Kids. Drac eventually comes around to liking Jonathan – because it’s for kids. The human tourists that the monsters feared so much turn out to be loving fans of the monsters – because it’s for kids. Yes, everything’s for the kids – except quality entertainment.