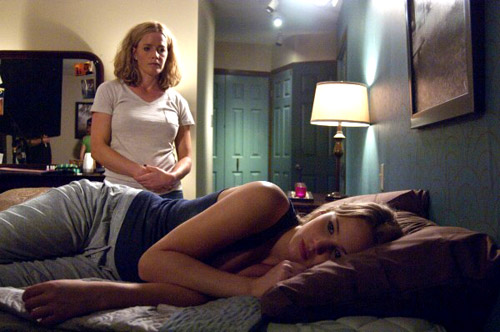 The Blondes At The End Of The Boobs.

From all appearances, HOUSE AT THE END OF THE STREET looks like your conventional thriller about the suspicious outcast across the street that could be a murderer or child molester, or worse. Like maybe a Republican. Rumors, sexual tension, “he’s really a sweet guy, just misunderstood…” In the end, it is a conventional thriller, but with some interesting turns that set it apart from the usual wildman-in-the-basement fare.

But first, look who’s moved in right next door to the House At The End Of The Street: two blondes. A hottie mother and her teen hottie daughter! What is there to do except kill them both?

Maxi-MILF Elisabeth Shue is mother Sarah, to daughter Elissa (Jennifer Lawrence, maxi-teen for the internet generation who saw her pirated ta-ta pics). In the good-looking, probably vacant house at the end of etc. lives Ryan (Max Theriot, who resembles his house – good-looking but probably vacant). His strange history with his retarded sister forms the basis of this mystery thriller. Just as Elissa looks like Jennifer Coolidge’s hotter little sister, Ryan looks like Cam Gigandet’s younger brother, so though he’s an outcast at school, he’s just so dreamy and introspective that Elissa can’t wait to show him some ta-ta; so they poetry slam about trees and he confesses to Elissa that though everyone thinks his sis is dead, she’s really tied up in his basement. How does he sell Elissa this tale without her running to child services? Well, have you seen those dreamy eyes? 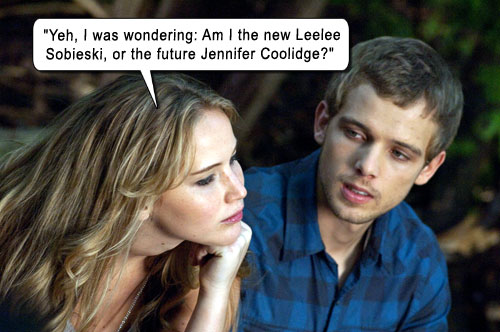 Gil Bellows is small-town Sheriff Weaver, who cultivates Sarah. (I always find it amazing that as soon as one guy in a movie latches onto a hot single woman, no one else moves in for the kill. When every man out there knows that a luminous bedroom-eyed dick-magnet like Elisabeth Shue would be cultivated left, right and knife-kill by every single snake-eyed bootlicker that carries a pair of testes. Unless it’s part of a love-triangle or philandering plot, the single woman can breathe easy once her love interest makes a move, because no one else within sniffing distance will bother… Onward.)

Hey, two teenagers necking in a car. What is there to do except kill them both? And I thought filmmakers had moved past the trope of sex = death…