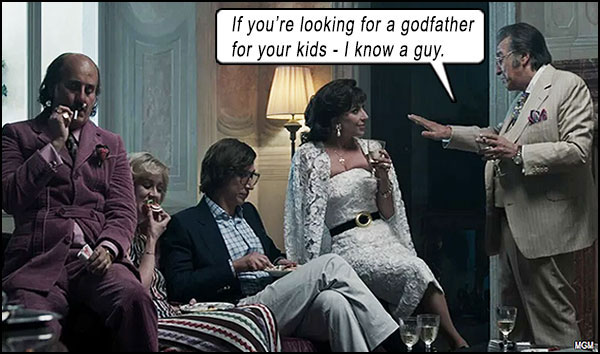 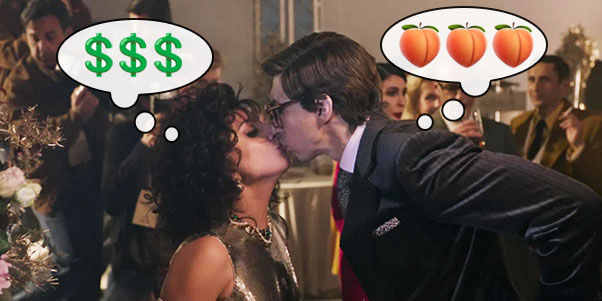 Lady Gaga stars as Patrizia Reggiani, one of the world’s greatest gold-diggers (alongside Heather Mills, Anna Nicole Smith and Melania Trump). From a poor Italian family, Patrizia manipulates her way into THE HOUSE OF GUCCI in 1972, marrying Maurizio Gucci (Adam Driver), heir to the Gucci fashion empire. Not content to sit on the sidelines and earn a fortune to simply – as Eddie Murphy puts it – “just fuck your husband,” Patrizia’s snide meddling in the Gucci business would drive a rift between Maurizio and the Gucci movers and shakers – his powerful father Rodolfo (Jeremy Irons), and entrepreneur uncle Aldo (Al Pacino), resulting in betrayal, financial instability, and eventually murder. Not to mention all the fashion emergencies.

Patrizia Reggiani was truly the Yoko Ono of the fashion world.

Directed by Ridley Scott, and based in small part on events documented in Sara Gay Forden’s book The House Of Gucci: A Sensational Story of Murder, Madness, Glamour and Greed, Custom House 2001 – the book details the whole Gucci story from its founding in 1921 by Guccio Gucci, while the movie focuses on Patrizia’s contribution to the Gucci family’s dysfunction – and is told from her point of view.

Patrizia is flabbergasted that Maurizio did not want to exploit the empire at his disposal (he wanted to lead a quiet life away from the headaches of overseeing a business), and overestimated her power and influence, her narcissism leading her to believe that the Guccis would welcome her business acumen. When she drove the business into chaos with her interference and was ousted by the Guccis (Aldo: “Tell her to stay away from Gucci before you do any more damage!”), her pride wouldn’t let her leave the family without revenge.

After her divorce from Maurizio in 1994, she was forbidden to use the Gucci name, yet continued to do so. And when she discovered Maurizio was about to marry a friend of hers, Paola Franchi (Camille Cottin) – she hired a hitman. Maurizio was shot and killed on the steps of his office building in Milan on March 27, 1995. Movie opens with that murder…

Why did Patrizia have Maurizio killed? Many reasons: because she detested he was remarrying; because he did not lavish enough riches on their two daughters; because if he had remarried, the conditions of their pre-nup would cut his annual alimony payments of $1.4 million in half… I mean, what’s a gold-digger to do? (Still, wouldn’t killing him make the payments stop altogether? Isn’t it better to have half of 1.4 million, than none of 1.4 million? And why not kill the girlfriend instead? The mind of a gold-digger is a terrible thing to baste.)

And who did Patrizia hire? A local pizza guy down on his luck. And who advised her on this plan of action? Her psychic, Pina Auriemma (Salma Hayek, in real life, married to François-Henri Pinault, CEO of Kering, who owns Gucci!) And how did Maurizio actually divorce Patrizia? He left the country on a “business trip” and told a friend to tell Patrizia the next day that he wasn’t coming back… HOUSE OF GUCCI was a movie just waiting to happen.

Before I start lauding the cast for their performances, the movie as a whole suffers from a language barrier… we need to get past the SCHOOLYARD ITALIAN that everyone is speaking, before we can relax into the soap-opera stylings of the insane plot. I mean, Italians speak Italian, not English with Italian accents – that’s a conceit of Hollywood. Even Al Pacino is speaking Schoolyard Italian – and he’s really Italian – and was in THE GODFATHER!

Lady Gaga (despite the Schoolyard Italian – even though her heritage is Italian!) is magnificent as the narcissist Patrizia, who quickly adapted to life in the 1%, even though at first she seemed innocent of her wiles as she forcefully seduced Maurizio (which includes a rough bang on a desk – not many movies are brave enough to portray this kind of forceful pumping!). Gigantic in the world of pop music, after Gaga’s acting turn in 2018’s A STAR IS BORN, she became that star in the acting milieu! Adam Driver may be the leading man, but the movie is held aloft on Gaga’s shoulders.

Jared Leto seems to have watched every episode of THE LARRY SANDERS SHOW and assimilated Hank Kingsley unto his being. As cousin Paolo Gucci, the put-upon, talentless family hack, he oozes insecurity, ineptitude and feeble-mindedness. Desperate for his inferior designs to be taken seriously, desperate to be loved, Patrizia plays a long con on Paolo, advising him that he could leverage Aldo’s approval of his designs if he threatened to expose Aldo’s tax evasion to authorities. The scheme inadvertently exposes Paolo’s own inadequacies, and he regrets it as soon as it backfires on him. Once again, the giants Irons and Pacino are doing a mesmerizing job as company heads and tragic fathers, yet Leto’s doofus out-entertains them.

With her every move, Patrizia created chaos within the ranks, while thinking she was being constructive for the Gucci brand. Maurizio would tell her, “I never asked for your help…”

Patrizia’s psychic Pina tells her, “Men have this problem of thinking they are smarter than they really are.” This, coming from a psychic! It proved true with Maurizio though, as he eventually does grab Gucci by the pussy… and cocks it up, ousting his relatives and almost losing the company. When police turn up at his Milan house for his financial crimes, he makes his escape by simply riding off on a bicycle behind his house, crossing the border and avoiding arrest (the quirky getaway accompanied by Rossini’s cute little Barber of Seville motif). Ah, the beauty of living in Europe, where whole countries can be crossed by bicycle in the time it takes to issue arrest warrants.

Movies “based on real events” insert all manner of dramatic license, but HOUSE OF GUCCI just sticks to the outlandish events that transpired and still ends up a magical mystery tour.

And that, Movie Maniacs, is why The Beatles broke up.

The Misunderstood Art of Jared Leto.

No matter the critiques against Jared Leto in various unsuccessful roles, I believe that Jared – in immersing himself in his job description (ACTOR) for each role, good or bad – is truly being edified by his art. For the amount of time and blood he puts into each role, I’m sure he is proud of each of them, whether the movie was successful or not. I believe that he would be equally as ambivalent of critiques of his Mark David Chapman (CHAPTER 27) or Rayon (DALLAS BUYERS CLUB), as he would be of his Morbius (MORBIUS) or Joker (SUICIDE SQUAD). To him, they were all equally immersive.

Here, his Paolo is simply astounding for yet another unrecognizable immersion. How would a casual observer believe that this variegated panoply of characters is all the same guy? Why isn’t Jared Leto lauded like Daniel Day-Lewis? Because he has an equal amount of successful and unsuccessful movies, so, much like he disappears into every role, many times his art disappears into the background box office noise. Jared Leto can be said to be the Daniel Day-Lewis of bad movies.