Laid up and drugged out, as a kidney stone wended its merry way through my scarred urinary tract, with ab-so-lute-ly nothing better to do than let the painkillers swoon me into semi-oblivion, I happened to catch this movie on cable. I wouldn’t want anyone to think that I paid to view it in a cinema, or rented it, or – heaven forfend! – that I watched it STRAIGHT. 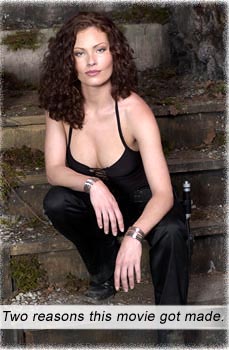 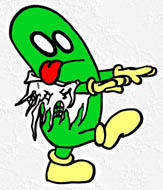 Having played this sensationally gruesome video game and avidly trod the doomed rooms and dread passageways of The House, battling Chariot (Type 27), The Hanged Man (Type 041), and other impossible sentinels, my curiosity was piqued as to how the game would transfer to the movie screen.

HOUSE OF THE DEAD’s banal plot revolves around a group of “crazy kids” – a la Scooby Doo – led by Ona Grauer and a gaggle of other faceless models-slash-actors, attending a remote island for a world-shaking “rave” – whatever that is. (You kids today with your hula-hoops and your mini-skirts and your Pat Boone…) After bribing a boat captain thousands in cash to ferry them there (a stupidity which begs its own network of rhetoric), they find the “rave” deserted.

Passing mention is made of a “house” – presumably the titular House Of The Dead – but most of the action takes place on fake outdoor sets and other locales divorced from any semblance of haunted residence.

A fallen video camera acts as flashback exposition, showing the island in the throes of a – party?! Is that it? Oh, so this “rave” thingy is just a “party”? In the grand tradition of re-euphemizing “used cars” as “pre-owned,” or “shell shock” as “post-traumatic stress disorder,” the word “party” is now too square for you drug-addled, silicone-implanted, metrosexual jagoffs?

It is learned that the party was broken up by rampaging zombies. Intelligent thought stops here…

I don’t think the pinheads who call themselves screenwriters and directors understand the mythos behind zombie re-animation. Zombies can’t die – they’re already UN-DEAD. They do not bleed, they know no pain. Unless their bodies are completely annihilated, they will continue being animated. At least, that’s what my Jamaican witch priestess tells me.

Which means that a .45 shot into their “hearts” is not going to stop them, nor will a machete to the torso. And a shotgun blast to the chest will certainly not bring forth gouts of blood. At least in the video game’s logic, the shooter pumps so many rounds into each monster that it is completely decimated, leaving a fetid mush that cannot re-animate itself.

Yet each actor-slash-model (trained in the non-acting style of George A. Romero’s grandest crap-classics) gets their Matrix-circular-camera moment, slaying zombies on all fronts with single bullets and karate chops to the sternum. Seriously, these zombies are more ineffective than the Stormtroopers from RETURN OF THE JEDI, who get knocked out when Ewoks trip them.

I suppose the film’s writer, Mark Altman, having penned the not-too-shabby FREE ENTERPRISE, felt compelled to insert a Captain Kirk reference, in the character of Jurgen Prochnow, who must have needed milk money desperately to have succumbed to appearing in this aromatic dung-swill. There is also a reference to Prochnow’s primo role in the magnificent DAS BOOT, when one of the untrained B-actors mentions that he “looks like a U-Boat Captain.” I wonder how many of this movie’s target audience of square-eyed swine picked up on ANY of the snide references to other films, as when Prochnow declares, “Say hello to my little friend,” presaging his machine gun moment. Uwe Boll directs, continuing to prove how good he is at being bad.

Aimed at a demographic who have not the wherewithal to comprehend the Sisyphean futility of the video-game concept (i.e. the game ends when you die – you cannot win), this is merely a slasher film for the mindless and mindless at heart. Accordingly, everyone dies in due course, except for a heterosexual pair of Attractive White People.

A better use for this film’s scant yet misused budget might have been to send the cast through Acting School, although Ona Grauer’s left breast did a good job, as did her right breast – and those slomo running scenes: priceless! I especially liked the final scene with Ona trying to act like she’s been stabbed, but looking like she’s just eaten ice cream too fast.

Attempting to do something more constructive with my time, I pulled out my Digitally-Restored, 35th Anniversary, Special Edition, Widescreen Anamorphic DVD of MANOS: THE HANDS OF FATE. Ah, yes! – the drugs were suitably brain-numbing – now HERE was some quality film-making…