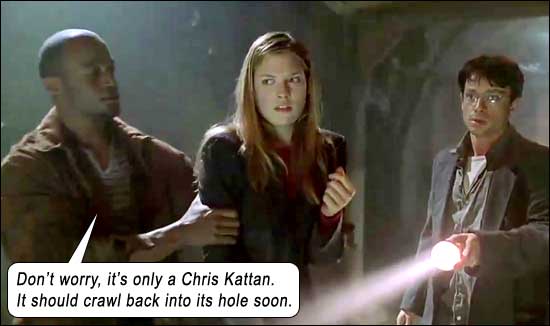 It’s not the fact it’s a remake of the Vincent Price comedy HOUSE ON HAUNTED HILL  from 1959; it’s not the fact the ghosts are real now, instead of manufactured by the unbalanced host; it’s not even the fact Chris Kattan is here, who, on an acting scale of Chris O’Donnell to Gary Oldman – is a Minus Rob Schneider.

It’s everything! Sometimes a movie just lacks any shred of substance, any dollop of dignity, any whisper of watchability. With its insufferable, vapid performances, absurd character reactions, scattershot continuity, slipshod editing, unsuitable soundtrack, and supposedly eerie atmosphere that five-year-olds would laugh at as Halloween kitsch, HOUSE ON HAUNTED HILL is so bad it makes Chris Kattan look like Hayden Christensen Adjacent.

The – ahem – skeleton of the tale remains the same: that of a millionaire who invites five strangers to a supposedly haunted house, offering them one million dollars each if they survive the night. At first, the guests think it’s a lark, until The House reveals itself to be sentient, seals them in and tries to kill them with visions, psychological trauma and bad screenwriting.

As homage to the original, the millionaire’s name is Price (Geoffrey Rush). His entitled, gold-digging snob wife Evelyn is Famke Janssen. The subplot of Price trying to kill his wife amidst the fracas is unnecessary, because in the original, this plot element sat snugly within the context of the millionaire making it look like ghosts were trying to kill everyone. But here – the ghosts are real. So there’s no need for the extra evil of Price. What’s the great Geoffrey Rush doing in this buttock scab anyway? Though the original has dated badly, Vincent Price played his role with a wry wink, whereas Rush plays it straightforward Captain Barbossa homicidal.

The guests are Taye Diggs, Peter Gallagher, and two blondes hard to tell apart due to their lack of talent being almost identical, Ali Larter and Bridgette Wilson. Chris Kattan is the caretaker who keeps warning them, “It’s the house that’s doing this! It’s the house that’s doing this!” but no one believes him because he’s Chris Kattan. And no one is sure whether he is trying to act funny and not succeeding, or trying to act serious and not succeeding – kinda like his time on SATURDAY NIGHT LIVE.

For no good reason, this remake adds oodles of backstory to the house: previously a mental asylum where the insane doctor (the inimitable Jeffrey Coombs in flashbacks) conducted horrific experiments on his patients, those patients eventually overrunning the facility. Even if screenwriter Dick Beebe had kept the story as linear and ludicrous as Robb White’s 1959 version, TV director William Malone was intent on turning the whole affair into a curdled mess, the only “sense” emerging when Larter identifies the five guests as descendants of the cruel asylum staff. And the House – not Price – invited them, to take its revenge. The rest of the movie is people running down dark corridors, spastic room-shaking, tilted angles, blood vats, roaring soundtrack, sweaty explosions and basso-voiced entities.

Except for the House trying to kill these people (and by the second act, we’re rooting for the House), there is no rationale for anything in the story – the offer of money is ludicrous and we cannot comprehend how Price will benefit from paying it out, or even how he might profit if the guests die and he doesn’t have to pay it out. Has he warned the authorities he is hosting a party where people might get murdered gruesomely? If so, would he be a suspect, or has he paid off the authorities not to look into the deaths too closely? How do you know this victim? You don’t? What were they doing at this party before they were killed? You invited them? Oh, it wasn’t you, it was the house? Sir, you have the right to remain silent. Anything you say can and will…

Remade in the same year THE HAUNTING was remade, HOUSE ON HAUNTED HILL reeks of Hollywood copycatting, suffering from the same rancid fate as that other remake. The nineties, when filmmakers forgot how to do horror and thought their new-fangled “computers” would make up for their filmic incompetence. And if their digital incompetence didn’t truly scare you, there was always Chris Kattan.