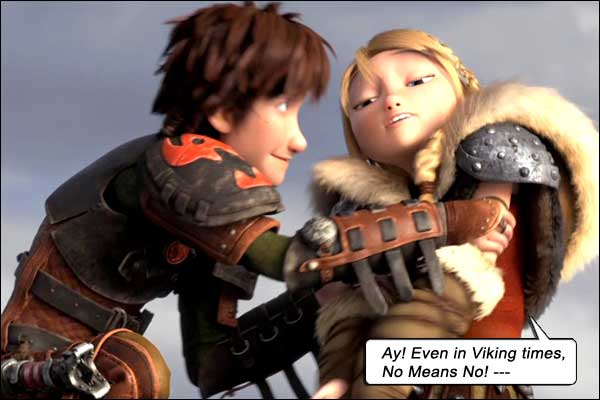 Stop Dragon my Bewilderbeast around.

In HOW TO TRAIN YOUR DRAGON 2, Jay Baruchel returns as Hiccup the Viking with his small black dragon. And his pet named Toothless.

As you can tell, TRAIN YOUR DRAGON 2 is a little more mixed messagey than its predecessor, because it is, after all, dealing with apex carnivorous predators as pets to apex carnivorous predators. Man – and dragon – does not live on fish alone. Woven within this straightforward Might Is Right tale is the journey of Hiccup, from reconciling his family for one joyous moment, to accepting the burden of manhood.

His mother Valka was long lost; now discovered – as queen dragon rider of a faraway land (voiced by Cate Blanchett, whose introduction is ominous and cloud-rider cool, in an African tribal mask). Valka and her reunited husband, Chief Stoik (Gerard Butler), share but one romantic highland jig, to the joy of Hiccup (and the envy of Gobber – Craig Ferguson as Stoik’s lieutenant), and before we have time to envision the lopsidedness of tonight’s 3D Viking sex, the family unit is shattered once more.

Movie attempts to capture excitement in its opening scenes with the village of Berk’s teens (voiced by America Ferrera, Jonah Hill, Christopher Mintz-Plasse, T.J. Miller and Kristen Wiig) engaged in a dragon-riding race, pointedly screaming their relationships to each other, embarrassing fake camaraderie, reminding us of the worst Quidditch matches in HARRY POTTER.

Then it settles into what made the first movie so good, the quiet moments between a boy and his dragon. (And no, you won’t go blind.) Hiccup flies Toothless, his cute, expressive Night Fury, to the ends of the known earth, ever-extending his drawing of the world map, a cool concept for we who take the internet tubes for granted. Hiccup still has a prosthetic foot (from the last movie) and tries out his solo flying rig successfully. Soon he is joined by Astrid (Ferrera) and the only question in any of our heads is whether they’ve done it already, and by that, of course, I mean, milked his dragon.

Volka shows Hiccup her dragon haven, lazily ruled by the gigantic, wallow-plump Bewilderbeast (reminiscent of the creature in the Little Talks video from Of Monsters and Men). Such a big fuzzy cutie.

Into this perfect world of training your dragon, night furies and plasma blasts (okay, maybe you will go blind if you’re doing all three), Hiccup’s character is forced to grow when Drago Bloodfist (Djimon Hounsou) leads his dragon army to conquer and destroy Berk. Stoik wants to blockade the village, Volka wants to protect the haven – while Hiccup wants to “talk it out” with Drago. He learns the hard way there IS no talking with close-minded ignorance.

After Hiccup pleads nothing but platitudes (what I call “antelope trying to talk lion”), Drago brings his own black, evil yet oddly cute Bewilderbeast to battle Volka’s, like two skyscraper styracosaurs, while Stoik faces off with Drago in the foreground. The action is monumental, and once again, this DRAGON series shows its bravery by making major characters pay with their lives for Hiccup’s stubbornness. Though the movie advocates for peace via Hiccup’s words, it will soon enough turn to war for pragmatism.

Seems if the dragons are fighting on YOUR side, they’re doing it for the good of humanity, but if they’re on the OTHER side, well, that’s mind control!…

Toothless and the other dragons are won over by Hiccup’s niceness or ethics or his plasma-spitting dragon – whatever – and we have to admit that under the contradictory messages of war begetting peace and masters begetting freedom, it is quite touching when Hiccup is hailed as the returning chief with Toothless as his “Alpha to protect them all.”

Now will somebody please check on my piggy-fat Bewilderbeast?