Should I assume HOW TO TRAIN YOUR DRAGON is a sex manual on controlling premature ejaculation? Oh, a cartoon about a Viking boy that learns understanding and tolerance after befriending a dragon. (Still, that blond chick’s pretty hot for a cartoon; ‘scuse me while I train my dragon…) TRAIN YOUR DRAGON is Dreamworks, but like the greatest Pixar productions, it has heart and soul. And fire.

Young Viking Hiccup (voiced by Jay Baruchel) lives on the faraway island of Berk, which is regularly terrorized by dragons. Consequently, all the Vikings are geared towards defending themselves against the winged, fire-breathing invaders. All except Hiccup, who would rather invent things. 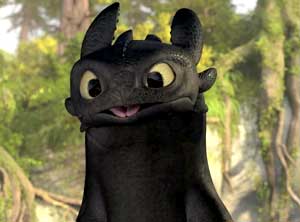 During a dragon raid one night, with one of his inventions – a giant slingshot – Hiccup shoots down a Night Fury (a fierce mythic dragon that none have actually seen). No one believes him. The next day, unbeknownst to his village, he finds the injured Night Fury and tends to its recovery. All the while wondering why these apparently faithful, intelligent creatures are so maligned.

The dragon, which Hiccup dubs Toothless, is a cross between a dog and an axolotl, jet-black, cute, expressive. To mend Toothless’s damaged tail from Hiccup’s slingshot, Hiccup designs a mechanical tail rudder, and together they learn to fly again, as dragon and rider. A montage of the boy and dragon growing closer, yet still distrusting of each other, with funny little vignettes showing off Toothless’s vast array of emotions, until one day – a spark of magic – Hiccup puts his hand out tentatively and Toothless moves his face forward into it. A “moment” between them – then Toothless pulls away. Excellent.

The film is filled with moments like this that catch us off guard. Hiccup’s father is Chief Stoik the Vast (the unmistakable brogue of Gerard Butler), who laments that Hiccup is a girlyman, pushing him into Dragon Academy to learn how to battle dragons, taught by blacksmith Gobber (Craig Ferguson, two steps further than Butler into indistinguishable brogue). Hiccup does want to make his father proud, but in a way that his father cannot grasp – he wants to show the village that dragons can be their allies.

This leads to another “moment” that sparkles. Hiccup discovers why the dragons raid the island intermittently – to pay tribute in food and livestock to an ominous presence on another island. Stoik discovers that island of dragons and plans to raid it – to kill all the dragons at their source – against Hiccup’s pleas and warnings. During this argument, Stoik proclaims, “You’re not my son!” and storms outside, with a look of resolve on his face as he strides to organize the raid, tempered with a sudden fleeting disconsolate look that says in wordless anguish, “What have I done?” For a brief second, his eyes are bereft, shocked at the soul-crushing insult he himself visited upon his only son, then he flenses that “weakness” for the task at hand. An amazing moment! That cartoon deserves a Golden Globe!

Hiccup’s crush is blond, blue-eyed warrior chick Astrid (America Ferrera), but she’s only interested in slaying dragons. (Do we refer to that sex manual for this psychological allegory?) The clique of friends is voiced by various comedians: Jonah Hill, Christopher Mintz-Plasse, T.J. Miller, Kristen Wiig.

The key to the movie is voiced inadvertently by one of the Viking boys, who muses, “Imagine if you could get into a dragon’s head, then you could destroy it from the inside!” Not realizing that once you get into someone’s head, you gain understanding of their point of view. TRAIN YOUR DRAGON (from the book by Cressida Cowell) is all about Hiccup getting into his dragon’s head, assimilating dragon culture so well that, in the final battle, he leads a force of kids-on-dragons – dragons that used to be considered expendable training animals for them to slay.

The dragon designs are all extreme heads and torsos and colors, a combination of Sendak’s Where The Wild Things Are and medieval hallucination.

In the grand tradition of gigantic monsters – the Kraken, the Rancor, the Balrog – the sinister king dragon is a massive masterwork of ferocious design, and the final battle is a nail-biting, emotional fracas.

TRAIN YOUR DRAGON does follow a predictable story arc – until its last scene, where it once again shocks us with its brave story decision. Tears may edge your eyes as Hiccup wakes after the final battle. With a prosthetic foot, created by the blacksmith, created to slot into his dragon harness. Toothless helps him walk. Not only does this scene perfectly balance the scenes where Hiccup helped Toothless with the prosthetic tail rudder, it also highlights a very modern solution. Whereas we are used to heroes always concluding a battle with maybe a cut above their right eye (cough–Bruce Willis) or an arm in a sling (cough–DIRTY DOZEN) – all healable wounds – this movie opens our minds to the acceptance of a hero crippled for life, yet making the best of it!

Thankfully, his dragon was untouched.