Madder, badder. Slicker, sicker. After the cult success of the horror-porn novelty THE HUMAN CENTIPEDE (2010), writer-director Tom Six promised us a sequel where twelve people would be joined together. We thought he was crazy. Then he went and made THE HUMAN CENTIPEDE 2. Now we know he’s crazy. 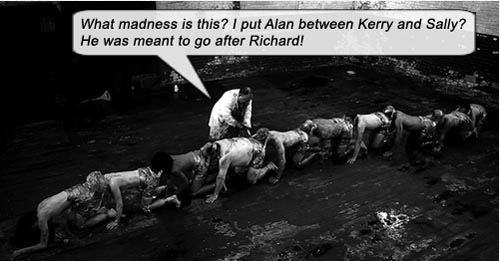 THE HUMAN CENTIPEDE 2 takes all that was sick and disgusting about its predecessor – and vomits it in our mouth.

An obese parking garage attendant watches the final scenes of THE HUMAN CENTIPEDE on his computer in his cramped office. A meditative glimmer crosses his thousand-yard stare. On one of the garage monitors, he sees a couple walking to their car. He picks up a crowbar, slings it across one shoulder and shambles almost jauntily out of his office.

So it begins – boldly, with no pretense or futzing around. The obese sociopath garage attendant Martin (Laurence R. Harvey, in a brilliant performance where he utters not one word) simply walks up to his victims and bonks them on the head with his crowbar. He has decided to emulate the “experiment” in THE HUMAN CENTIPEDE movie – and all the world cooperates with his plan: people very courteously get knocked out with one bonk of the crowbar, blood streaming from their temples, but none of them dying (that would be rude); the parking garage becomes a hotbed of missing persons (the security cameras tell us so), yet no police or relatives or eyewitnesses come a-snooping; when Martin binds his naked victims at their wrists and ankles in a warehouse, they weep a lot and try to scream through the tape over their mouths, but they generally play ball and don’t try to escape by moving the rest of their bodies or by helping each other; when Martin is knocking out their teeth with a hammer or cutting into their gluteus maximus without any anesthetic, they moan a little but otherwise comply with the nice man by not jerking around like dying fish too much…

I told you Tom Six was crazy: he constructs a film where nothing makes sense, that yet moves along at such a derailing clip that no one questions its senselessness. CENTIPEDE 2 is rawer, more horrifying, not just for the gore – if you don’t wince at least twice, you’re not entirely human – but for its deleterious effect on your psyche: assimilating the disturbing scenes of Martin co-existing with his ragged mother (and what becomes of her), seeing the effects of Martin’s forced psychotherapy, or just knowing the star of this movie is, in fact, a dumpy, obese guy (his nude scenes, a horror unto themselves) who might just keel over at any minute in real life!

Martin intently rewatches the Master, Dieter Laser, in CENTIPEDE, outlining his specious “medical procedure” of joining people ass-to-mouth to create one long gastrointestinal system, which is completely ass-over-tit, as the waste products of one body being fed into another is not creating “one gastrointestinal system” but merely joining people ass-to-mouth. From Laser’s didactic lectures in the film, Martin somehow figures how to cut into knee tendons, stitch flesh and staunch bleeding. And all he needs are tools you can find lying around the house: a scissors, a knife, a hammer, and his all-purpose anesthetic – a crowbar.

The main sequence finds Martin forcing his stitched people to poop in each other’s mouths, as he squeezes their torsos and makes farting noises, then resorts to injecting them with laxative. I don’t care what anyone says, Tom Six has been watching too much Euro scat-porn.

The scariest aspect of this film is that I can imagine some lonesome, low-cerebral-activity loser actually being inspired by it; unlike THE HUMAN CENTIPEDE’s obviously campy hyperbole, this film’s “realism” makes Martin’s goal seem attainable, even though it never comes close to covering all the logistics of holding 12 people captive in a warehouse and slicing and stitching them together, never mind them bleeding to death or going into circulatory shock.

Ditzy Ashlynn Yennie, who played the middle girl in CENTIPEDE, reprises her role – as herself. Martin is wankily obsessed with her, and arranges with her agent to fly her to London from the States, to “audition for a Tarantino film.” I guess if she doesn’t twig that something is awry when Martin drives her to a dilapidated warehouse full of naked people, she kinda deserves to become Martin’s Number One.

When the centipede eventually shuffles forward on its shattered knees, through muck and shit and muffled screams, it is such a startling, unique shock-vision, you will never watch Euro scat-porn in the same way again…