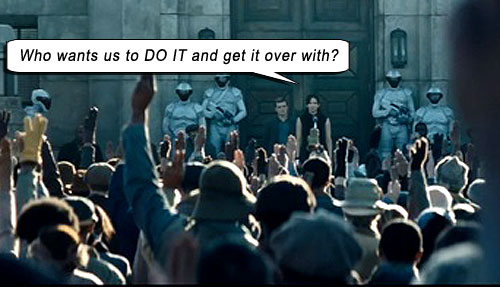 In THE HUNGER GAMES: CATCHING FIRE, the two models who survived the Hunger Games last year are forced by the Capitol to go on a Tour through the 12 Districts to rub it in everyone’s faces. And our faces too. Then they just repeat the last movie. And rub that in our faces too.

In this first sequel to THE HUNGER GAMES (book series by Suzanne Collins), Jennifer Lawrence returns as Katniss Everdeen, grumpy archer, and Josh Hutcherson reprises his role as Peeta, her ventriloquial dummy (the guy is like Pinocchio, in that his facial expression never changes). Liam Hemsworth completes this vapid non-sex triangle as Katniss’s boyfriend Gale, because in this insipid, unimaginative, pre-teen bankable-franchise environment, the more you resemble TWILIGHT, the more dolls you can sell.

Donald Sutherland is still President of Panem (which is just a future version of America, or a present-day version of Downtown Los Angeles), threatening to kill Katniss’s family if she doesn’t publicly quash the “hope” that she inspired by winning the Games. And there is a new Gamemaker to replace Wes Bentley’s Beard, the great Philip Seymour Hoffman with a name dreamed up by an elf: Plutarch Heavensbee.

The Holy Tour To Quash Hope, instead of quelling the Hope Riots, only exacerbates them. It’s like Ferguson, Missouri out there. So the Capitol schemes up a new twist to drag Katniss back into the Hunger Games to maybe get her killed – a Quarter Quell Hunger Games, where only winners from previous Games compete (kinda like JEOPARDY’s Tournament of Champions, only better, because none of them have to phrase their answer in the form of a question – stupid distracting rule!). Oh, plot device, thou predictable totalitarian mistress!

In honor of the same movie being replayed from the halfway point to the end, the same cast return: Woody Harrelson as The Homeless Guy, Elizabeth Banks as The Joker, Lenny Kravitz as The Hippie, and Stanley Tucci as The Village Idiot. Against the wishes of the pale boyfriend, Katniss now has to smooch that Boy Vagina in public again and smile big with those cheeks that I need to pinch pinch pinch!

Oh yeah, the irrelevant “catching fire” reference is probably to describe the growing uprising – but maybe it’s simply Katniss’s dress that creates a fire special effect and sends Tucci into a tizzy. I’m guessing the author intended the former and the tweenfans think the latter.

They’ve rewritten the motivations of Katniss, just to create a love-triangle and set little girlies hearts aflutter with her indecision on whose teen meat to cherish. Remember when dull Peeta had a crush on her – and she responded by masturbating his wounds and tonguing him in the cave? And remember how Gale watched all this on widescreen with a lump in his throat instead of his pants? Well, in this movie, Katniss tells Gale that her affair with Peeta “was all an act.” Okaaaay… then halfway through their tour, Peeta whines about being Just Friends and she tells him she can’t live without him.

Or how about the night Katniss wakes screaming from a nightmare, Peeta rushes into her room, and she asks him not to leave: “Will you sleep with me?” So Peeta, oh emasculated ladyboy Peeta, clambers in with all his clothes on– Must’ve been written by a woman! Even though they just snuggled, you do realize his erection never went down that night, right? It was a steel bar with its own zip code. Unless you’re an in-denial female, of course…

Katniss tells Finnick’s Bare Chest, “I’m an open book. Everybody seems to know my secrets before I know them myself.” Uh, yeah, Jen, about those nudes online…

Gale gets tied to the Whipping Post – any excuse to get his shirt off to impress Katniss. 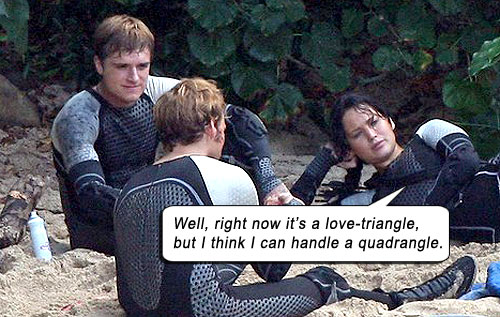 If it weren’t for the striking performance of Jennifer Lawrence, CATCHING FIRE would hardly blip as a relevant movie.

There’s a grim indictment of our class-struggling society written into the fabric of THE HUNGER GAMES, but it’s framed within this tiresome faux-competition that doesn’t need to exist in a totalitarian government. You see, the Capitol (embodied by smarmy President Sutherland), is so powerful they needn’t fret about the best method of disposing of Katniss and dispelling her anarchic influence. Why is the President even bothering to re-write foolish rules into the Games to try to kill her? Hey, Bond Villain, Just – Kill – Her. If you really think she’ll become a martyr, then run some doctored footage of her killing a few kids or something. Have you seen THE RUNNING MAN? The Capitol is all-powerful, to the point where it can make an excellent actor-director like Stanley Tucci look like a gibbering idiot in a golden wig, and they can’t dispose of one low-class wench? I mean, you’re a totalitarian government – do something totalitarian!

Instead, President whines to Heavensbee like a bitch waiting for a call from her boo. Waah, how do I destroy her? Waah, she’s giving everyone hope because she defied me! Waah, I have innumerable armed guards willing to kill anyone who raises their hands and whistles but I can’t kill Katniss because – merchandising! Waaah!

Willow Shields as Katniss’s sister, Prim, gets her moment to shine in a beefed up role, playing staid nurse while her family crumbles around her. Still, Lawrence blazes brighter than anyone else in the conviction stakes, closely followed by the insouciant bum stylings of Harrelson. Seymour Hoffman is also without fault – like Gary Oldman, brings his A-game to even the schmaltziest turd-burgers. Everyone else is phoning it in, or probably just skyping it with those awesome gubmint cameras that can see every frickin thing from every frickin angle.

I still don’t get how the game controllers can see Everything from Whatever Angle They Bloody Well Want. We get no foreshadowing or knowledge of cameras in the forest, hidden or otherwise, no satellites, not even a simple bullshit explanation, like the complete Games dome being outfitted with cameras in every shingle. We can accept there are hidden cameras in a totalitarian government’s death trap – but how do these cameras focus on so many angles? Heavensbee asks for a closeup and not only do the controllers push in on the scene, they flip to four different angles, two of which can only be achieved by a Steadicam positioned directly underneath the lead actor’s ballsac! How much do you want me to suspend my disbelief, assholes?! Also, these controllers can never seem to keep their control room doors closed; more than once, Katniss walks by a door ajar and peeks in on something illicit before they look back and see her, then slam the door in her face. (You mean “physically looking back at the door” is their failsafe mechanism for ensuring no one is discovering their secrets? So they have cameras that can see through a person’s scrotum but no automatic door closers?) And where does she keep getting all those arrows? She empties her quiver on the baboons – the next scene, it’s full again! What the–? These lazy filmmaking methods friction my irritation so much that I can’t empathize with the film’s relevant messages.

Director Francis Lawrence chose the lazy route because – TWILIGHT. Even in this respect, he breaks from convention by making the woman the most powerful of the love triangle, rather than the annoying waif. The story also raises the very current issue of a boy-girl romance overshadowing – or at least, distracting from – life-death issues; broadcast a love story, no matter how corny, and people will forget they are being enslaved. It’s happening RIGHT NOW. (TMZ exists alongside Ferguson MO.) All great stuff. Then something stupid happens again – like meeting the “Career” Gamers – and all brave ideas are washed away. It’s not as if these “Careers” volunteer every year – they’ve been as unethically forced into their fates as Katniss and Puta; why are they called “Career Gamers” and why are they painted as baddies? And why don’t they have any body hair?