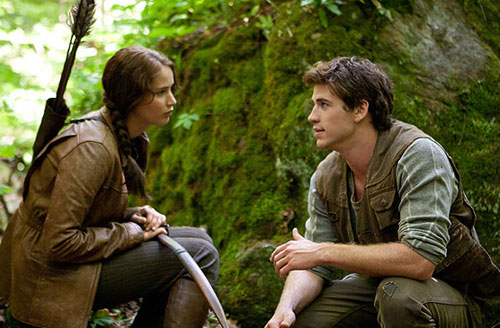 The mysterious connection between hunger and prettiness…

THE HUNGER GAMES gets caught up being a kid’s actioner with a hot chick, even though it originates as a grim commentary about class warfare. With a hot chick.

It’s the dystopian future. (Sheesh! Either it’s ‘apocalyptic’ or ‘dystopian’ – isn’t there ever a boring samo-samo future in mankind’s future?) And the ruling classes tyrannize the underclasses to the point where the underclass willingly sacrifice their children for battle, in order to keep the peace with the overclass. Kinda like, uh, the present, where the large percentage of real life underclass parents surrender their children to the military industrial complex with a smile and a salute in order to keep the peace with the belligerent overclass.

THE HUNGER GAMES is set somewhere in North America called Panem, made up of 12 Districts and the Capitol. Every year, the Capitol lottery-selects a boy and girl from each District for the Hunger Games, a televised death match pitting them all against each other (a cross between THE RUNNING MAN and BIG BROTHER TEEN MODEL). Parents willingly sacrifice their kids because the Capitol has fooled them into believing that these Games atone for an uprising in the distant past; to keep the peace, to avoid the Capitol’s revenge, they give up their kids for the Capitol’s annual amusement.

From her District 12, Katniss Everdeen (Jennifer Lawrence) volunteers for her younger sister, who is chosen. It’s a nice gesture an’ all, but wasted in the way it’s played. We know Jennifer Lawrence is going to take the place of the little nameless girl actor. Big deal. The boy model from District 12 is Peeta (Josh Hutcherson), who has a thing for Katniss ever since he threw her some bread in the rain. So romantic.

From the novel by Suzanne Collins, written for the screen by Billy Ray and directed by Gary Ross, movie is an insipid collection of tropes and conventions laid end to end to satisfy the teen market.

Elizabeth Banks is some kind of circus clown who applied her makeup during an LSD trip. Woody Harrelson just crawled out of bed. Lenny Kravitz wanders on set like he’s in between music videos. Who are all these superfluous characters? In trying to be a sprawling epic, many people end up milling aimlessly with nothing to do. I can’t even remember what Toby Jones was doing here.

Wes Bentley tries to out-act his beard. Stanley Tucci in a giddy battle against his hairdo that escaped from BRAM STOKER’S DRACULA. And Donald Sutherland as the grand poobah, tending roses and playing chess with Wes Bentley’s beard. 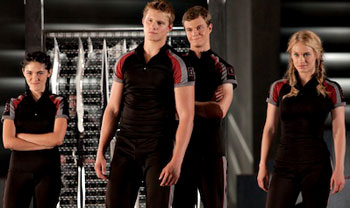 I get all the teen models (for the voyeuristic world’s viewing pleasure), but what I don’t get is how we’re seeing them all during the Games. How are they being televised with not one camera on them? On the trees or on the grounds. Shades of THE TRUMAN SHOW as the controllers use fire to push Katniss in their chosen directions. But how are they seeing her? And how do they make those CGI manbearpigs out of thin air? The beasts chase Katniss and we see the actual movie footage in the monitors of the control room. Director Gary Ross is an idiot. How do we see Katniss and Peeta in the cave? Where the filmmakers employ the old Tending The Wound Sensually scene, which is more sexual than healing.

At the auditions, Peeta showed his massive upper body strength by throwing something. No payoff. Katniss makes wood stakes. No payoff. A girl-on-girl fight, but it’s badly directed, by which I mean, no one gets their top torn off. No payoff.

Meanwhile, Katniss’s District boyfriend Liam Hemsworth watches all this sensual action onscreen (transmitted by those invisible cameras), never quite admitting to himself Katniss has kicked him to the curb now that she is out in the world with a fire-skirt and Running From Danger with Peeta the Badass Disguise Artist. (Yeah, that’s one of his skills: using professional-grade film makeup (from God Knows Where) to look like foliage to avoid being bitched by any of the tougher girls.) The Privacy Cams show Peeta and Katniss kissing in the cave and there’s Liam watching every move. He forgot the cardinal rule of action adventure films: if the girl and guy go through a life-threatening situation together – especially if she tends his wounds! – they’re an item!

And just how did putz Peeta ever score the dynamic, independent Katniss? He admitted he had a crush on her on national TV. As with every teen fiction, when someone admits a crush, the person they are crushing on somehow digs them back! Fellas: PURE UNADULTERATED BULLSHIT. The filmmakers try something different in making the woman the more powerful of the couple, but that’s another sociological mistake: her being more powerful gives her even more reason not to succumb to his crush.

We easily see all the devices to keep Katniss heroic: during the Games (where everyone is against everyone else) Katniss helps a young girl, Rue (Amandla Stenberg) survive an attack from the other teen models. Later, Rue is killed by those models. Katniss pays her respect to the invisible cameras and the District goes wild – a distracting action that makes us forget what might have happened had others not killed the girl – Katniss would have had to kill her. Can’t have that! An actual interesting character study might have happened.

Shark jumps proliferate: Over the invisible P.A. system in the forest (presumably on the same circuit as the invisible cameras), the controllers announce that even though the rules say only one person can win the Games, now they’ve changed the rules to two people can team up and win; whoops, sorry, just one person again. Nope, sorry, sorry, make that two people can win – just kidding! We’ll help Katniss with some magic potion that flies down on a fairy floss because – writer says so.

Michael Moore told us in FAHRENHERIT 9/11: “It’s a fight not between countries, but between each country’s ruling class and lower class.” The lower classes will always be fighting for the upper classes. With the rich always in ostentatious, hedonistic luxury, watching detachedly as the poor scrabble for existence. For their entertainment. How the Koch Brothers are laughing at you right now, watching THE HUNGER GAMES as if it’s fiction…