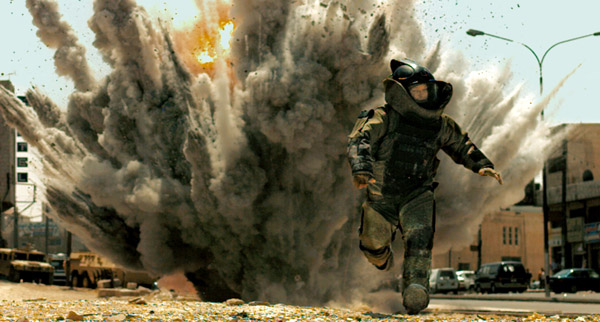 Heroic Movie about a Non-Heroic War.

Baghdad, 2004. THE HURT LOCKER opens with a quote from journalist Chris Hedges: “…war is a drug.”

Apparently, a drug not only to its combatants, but on the populace fooled by its “glamour” and on directors who fuel that glamour. Kathryn Bigelow directs this one-note movie – supposedly a horrifying closeup of a bomb squad in Iraq – like a sexy superhero tale. All that’s missing are the tight panties. It would take a director with much bigger balls than Bigelow to make their product look unsavory – it would take a Kubrick or an Eastwood. Bigelow’s product just looks way too heroic. And that is why it fails.

Been a long time since I’ve seen a pro-war film pretending to be anti-war. THE HURT LOCKER would like to believe it shows us the gritty realism of sudden death and wasted life. It does – all with hero angles.

Do we need any more proof than the slogan? “You don’t have to be a hero to do this. But it helps.” 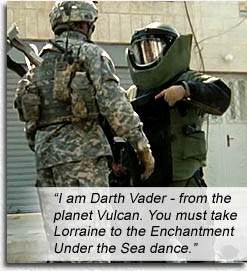 Movie centers on one soldier who can’t get enough of that war drug – Staff Sergeant James (Jeremy Renner), who breezes into the Bravo Company bomb squad (which seems to be just three men, James, Sergeant Sanborn (Anthony Mackie) and Specialist Eldridge (Brian Geraghty) as they’re counting down 28 days to rotation. He replaces their last Staff Sergeant (Guy Pearce) who died in a bomb blast (big surprise!).

And I cannot relate to this jerkoff at all. Or what drives him to relish the sordid, edge-of-death life he embraces like heroin. But he is the film’s hero. Not anti-hero, not villain, not protagonist – Hero. He is not portrayed as unbalanced or obsessed – even though he keeps a “hurt locker,” a box full of components from the bombs he has defused; and though an injured Eldridge lambastes him for being an adrenaline junkie, it slides off him like bullets slide off Rambo.

You gotta be a special kind of crazy to be a soldier in the first place. So though there are numerous tension-filled vignettes, there’s no substance to the tension when we back away to look at the large picture. Why are you in Iraq in the first place? This question is completely ignored in HURT LOCKER. It is not political in the least – and that is another of its failings. There should be a reason for why these men are here. As we know, George Idiot Bush had no legitimate reason to place American sons and daughters at Death’s door.

Eldridge very correctly laments, “If you’re here in Iraq, you’re dead.” Oookay… but why are you here? Have you ever examined your motivations, jarhead? You weren’t conscripted. Just conned. And you went of your own volition. So STFU and do your job!

Any time the movie’s tension flags, I keep going back to the same refrain: Why are you in Iraq? At many points, it looks like the muscled Amerikans are actually protecting Iraqi civilians from IEDs (Improvised Explosive Devices) or bombs planted among civilian villages – but we are never shown extra-legal Amerikan mercenary companies like Blackwater (renamed Xe), whose CEO, Eric Prince, blatantly admitted to holy crusades and private vendettas to kill Iraqis at the behest of his neo-con, christian leader, George W. Bush.

And we know for a fact that real soldiers watching this movie would not be lamenting the tragedy and brutality of the Iraqi boy being mutilated or the villager strapped with a bomb, pleading with the Americans to save him – we know that many soldiers will be thrilling to these deaths, brought about by their very intrusion into that country. It’s Viet Nam all over again. The bigotry displayed by the soldiers in the film is simply mirroring the bigotry of the soldiers on the ground – so why is Bigelow trying to fool us into thinking these soldiers care for the downtrodden people of that country? While the hypocritical American government bullshits its citizens that its military presence is needed in Iraq to quell the terrorism against the Iraqi people, they neglect to inform American citizens (whose taxes are paying to protect Iraqis, by the way) that the American military presence in Iraq is CAUSING said terrorism… Modeling the new summer line of slimming bomb-disposal wear, is Jeremy. In this daring new kevlar concoction, you can be ready for any beach – if you’ve illegally invaded another country for their oil and they’ve buried bombs under the sand to drive you out of their homeland.
Smile, you’re on closed circuit Taliban TV.

The cameos are distracting. They only serve to take us out of the film’s “realism.” Guy Pearce is the rugged Staff Sergeant at the movie’s opening who buys the farm. Then David Morse puts in a hilarious cameo as an officer wildly impressed with James’s stupidity/bravado in deactivating a carload of bombs without wearing his puffy bomb-suit, “You’re a wild man! A wild man!” And Ralph Fiennes suddenly appears as a Brit agent in the desert. As soon as I feel it would be cool to be firing big guns alongside the buffed Mr. Fiennes, the film loses its focus; that should be the LAST thing on our minds. And his sniper scenes are just way too kewl. Get me the hell outa here before I just have to touch his biceps!

Guys who play soldiers in war movies must be akin to white guys playing Apaches in those 1950s racist American westerns. How can a person who chose an artistic profession like acting ever convey the parochial mind-set of a person who chose a profession as a sucker – I mean, soldier? In the end, we’re looking at an artist’s rendering of being a close-minded, death-wishing, authoritarian, weak-minded adrenaline junkie.

James goes back home – cannot handle it – introspects to his infant son, “You love everything right now… As you get older, you find less and less things to love. Until, when you’re my age, maybe there’s only two things left to love. Or one.” Final scene sees James striding into another bomb situation with his puffy suit on, the text blaring its message of doomed heroism: “Days left in Delta Force rotation: 365.”

And that is why this movie… uh, bombs?…