Will Smith Saves The World – Again…

Everyone on Earth is dead – but they left the CGI running. 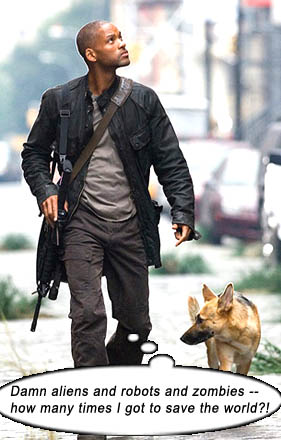 It is the near future and a plague/virus has taken down humanity – not again! – and Neville is the Last Military Virologist on Earth trying to find a cure for the remaining mutated humans who inhabit the scarred underbelly of the city, called Dark-Seekers (or Hemocytes). New York was “his sector” and his moral obligation to “fix things” is obsessive. Wife and child lost to an accident during evac of the city, now he blindly goes about his daily toil of hunting food, experimenting on rats, broadcasting his location to a world who may not be listening, “hiring” DVDs from the local store, and going slowly insane from the isolation.

While his cute German Shepherd, Samantha, frolics in the blighted cityscape, he smacks golf balls off aircraft carriers in the bay. It would be a good life, were it not for being no life at all.

Derelict future New York is all passively incredible CGI – a city bereft of human intrusion, yet breathing with the life of “reality” rather than simple rear-projection or matte painting; an exceptionally stunning, three-dimensional cityscape cyclorama, brimming with all the vibrancy that suffuses any real life tableau. It is some of the best CGI work you will ever witness. The visual effects companies who worked on this movie outdid themselves. (Among others, Sony Pictures Imageworks, CIS Hollywood, Lidar Services, New Deal Studios. The Visual Effects credits of this movie run longer than most movies’ full credits.)

Yes, the best CGI you will ever see… until the lion pounces. The passive tableaux look sensational, but animate objects are a little harder to create from dust or a twelfth rib or even computer pixels. After the film-makers raised dead New York from the primordial pixel stew, they got cocky and thought their version of LIFE would look just as convincing.

Thankfully, it’s not all about the CGI – though surrounded for most of the movie by green screen, Will Smith still pulls his A-game. Coupled with some well-constructed primal moments (Neville searching for his dog in a dark building, a knife breaking off in his leg), Smith’s sheer, unmitigated acting talent singlehandedly holds this movie aloft. In a scene where he sobs disconsolately to a storeroom mannequin, beseeching the dummy, “Please say hello back… please say hello back,” his emotional breakdown is so compelling that we imagine the dummy actually will come to life just to say it did a scene with Will Smith. And it doesn’t hurt the ladies’ visual experience that Neville’s daily exercise routine shows him ripped like the whip that scourged Jesus.

When Neville encounters the Dark-Seekers, we descend further into CGI audacity – these mutated humans (note: NOT zombies) are fully computer-generated, therefore kinda goony cartoony. As antagonists for Neville, they would have been more compelling had they been actual humans enhanced by CGI. Dash Mihok is the Alpha Male Dark-Seeker – or at least, playing the computer blip that does the most roaring at Will Smith.

I AM LEGEND is the third incarnation of Richard Matheson‘s 1954 sf novel of the same name. First iteration was THE LAST MAN ON EARTH (1964), starring cheesemeister Vincent Price; next iteration, THE OMEGA MAN (1971), starring Grand Poobah Cheesemeister, Charlton Heston. This 2007 version is directed by Francis Lawrence (CONSTANTINE, 2005) and re-scripted by Akiva Goldsman and Mark Protosevich.

In the third act, atheist Neville meets holy fool Anna (Alice Braga) and her son, refugees immune to the virus and on their way to an imagined sanctuary. Even though she saves his life after he tips into insane (due to the sad death of Samantha), he doesn’t know what’s worse – being victim to the Dark-Seekers or this Jesus freak.

Cultural touchstones appear throughout the film – the SUPERMAN AND BATMAN movie on posters, dialogue from SHREK, Bob Marley’s Legend album – with the final scenes setting up nicely how Robert Neville saves humankind, himself becoming a Legend for future generations to pray to meaninglessly as a savior…