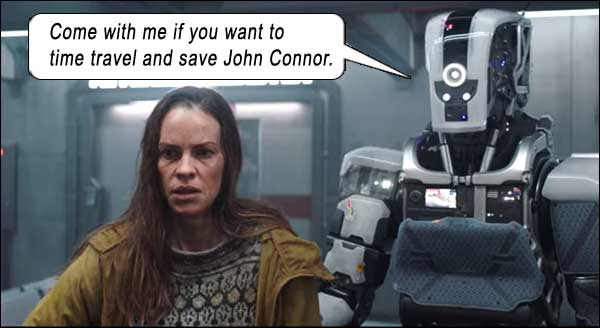 A young girl is raised by a robot in a biosphere, to believe that the outside world is annihilated, and all that’s left of humans are embryos in this facility. And that robots are her friend. Until a human outsider appears and tells her exactly the opposite.

I AM MOTHER is a well-written science fiction thriller that requires your full attention to glean its subtle and nuanced plot threads. On first viewing, I dismissed the film as the usual pap that lauded humans as the masters of their own destiny, until my second viewing caught a few key lines that turned the whole layer cake on its head.

Clara Rugaard is the young girl, simply called Daughter by her robot caretaker, known as Mother (voice of Rose Byrne, with Luke Hawker inside the cantankerous cold-hearted clump (thank you, Dr. Smith!). Plucked from a row of embryos and raised from birth, Daughter knows no other existence, and is “nurtured” with an eye toward her intellect. (At only 18 years old, her surgical skill would come in handy later.)

One day, while Mother is recharging, Daughter allows entry to someone crying for help from the outside. A Woman (Hilary Swank) enters, disheveled, sweating in pain, gut-shot and blood-stained, in other words – HOT. (You’d never call Swank a “beautiful” woman — but why is she so goddam attractive?) Daughter keeps Woman secret from Mother, until Woman’s bullet injury gives away her presence.

The plot of Woman trying to escape and take Daughter with her to a hidden human encampment is a smokescreen to disguise the real existential issues associated with an emotionless robot raising an emotional being, and the writers (Michael Lloyd Green and director/co-writer Grant Sputore) willfully insert plot holes in the robot’s behavior, which prove to be not plot holes at all, but a grander scheme that we only perceive much later (for example, at a crucial point, Mother cannot detect when someone is bluffing, making us believe the robot is poorly programmed if it can’t read basic human behavior, but at another point, Mother mentions explicitly that a person is anxious, meaning it can read human signaling). Therefore, red herrings abound.

I AM MOTHER is an Australian production that explores Nature vs. Nurture, and the age-old concept of A.I. building a better brand of human. I found myself wondering why they didn’t title the movie simply MOTHER. The added “I AM” is Cartesian (from Descartes’ famous dictum, “I doubt, therefore I think, therefore I am.”), and denotes a conscious realization of self. This robot is not just slave caretaker to a clutch of embryos – it has forged a multi-layered plot to unselfishly improve the quality of its creators.

No one is who they say they are – not Woman or Mother – both of whose plots within plots will leave Daughter rudderless.

I AM MOTHER doesn’t ramp to a conclusion so much as arrive at a crossroads, where Daughter must make a life-changing decision. Her choice will probably be regarded as “noble.” Because humans are too short-sighted to perceive any grander endgame.

Daughter rests her head on the cold steel shoulder of Mother. It’s a mammalian gesture, only associated with warm-blooded animals. Did the robot “teach” Daughter to do this? Or was Daughter influenced by the archived televised media she ingests? Although a steady diet of THE TONIGHT SHOW WITH JOHNNY CARSON should probably turn her brain to mush before it teaches her familial warmth.

This is a key moment in the movie, and what I believe is the reasoning behind the robot’s grand plan.

The evidence builds slowly, but it’s there if we look carefully:

(If Mother is the biosphere, it doesn’t bode well that all the lights are flickering when Daughter returns to the long corridors. Couldn’t Mother simply reboot, or re-route power, or replace bulbs or whatever–? She’s the heart and brain of the place! Yet she’s succumbing to “horror movie climax” to make it look disorienting.)

Early in the piece, Mother didn’t seem to have any sensory capabilities better than humans. One would think Mother would have all the rooms miked, yet she keeps walking in on conversations that start, “I don’t think—“ and completes the sentence of the person who hushed up when they saw her, “You don’t think what?” Many times, Daughter and Woman would “hide” from Mother by being out of her line of sight – but again, shouldn’t the whole facility be wired for sound and sight? And when Mother “sleeps,” the facility is a secret playground for Daughter (to compare bullet sizes, or search for dead babies in the furnace) and Woman (to conspire with Daughter, or shape tiles into shivs). At the end, we discover it was all red herring. Mother knew all along. And how could we be dead sure it was all a grand scheme of Mother’s? 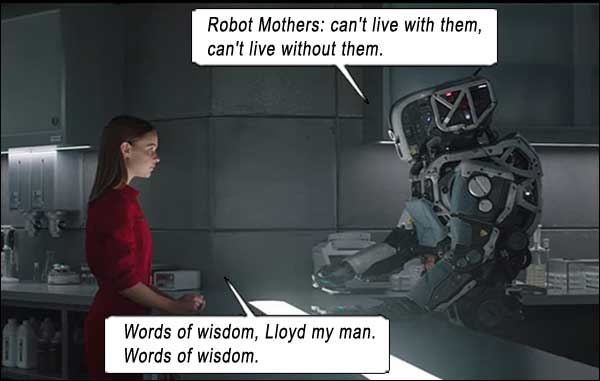 Yes, the person whom we regard as the “star” is summarily murdered by Mother after Mother’s ploy is fulfilled – the ploy of “nurturing” Daughter into a stronger, more durable survivor. What we thought was a tale told from the point of view of the suffering human, merely uses the human as a pawn; we are conditioned (nurtured – !) by Hollywood to believe that the “star” is the Hero, and our empathy was caressed when Swank would say things like, “But just know: that “thing” – feels nothing for you. It can’t!” We went along blindly being prejudiced against Mother from the outset, as an ominous Other. To all our surprise, this turns out to be Mother’s story…

Furthering our prejudice against the robot, Daughter finds jawbones in an incinerator, proving Mother was burning children that didn’t come out healthy. Mother was Hitler!

However, the writers remove that Hitlerian bent by having Mother’s physical form removed from the equation – even though her “consciousness” still runs the biosphere. She is in the harvesters outside, terraforming for the new human species, she is in the hundreds of drogue droids surrounding the biosphere for protection. She is Big Brother, watching all, guiding all. Mother is everywhere. And everything is Mother. The walls, the lights, the air is Mother. You are Mother.

And I am Mother. And I love these new Hilary Swank boobies.