Like a turd falling from the sky and hitting every branch of the Cliché Tree on the way down, I AM NUMBER FOUR dumps on us by way of TWILIGHT and the Uncanny X-Men. And every other superhero/teen/action/alien movie it can possibly steal from. 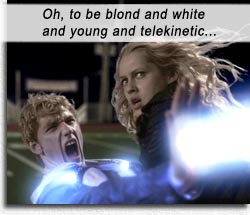 A couple of sexy aliens are fugitives on Earth from a race of evil aliens called Mogadorians. Yes, before we go one step further, they used that name. Say it out loud and taste the kindergarten toughness: Mogadorians. Really? Was the word “Zambathustian” taken? Or how about “Bombalambian”? (Vonnegut did call his fictional alien civilization Tralfamadorians – but they were meant to be satirical.)

You’d never know these guys were aliens though – they are Alex Pettyfer (blond as a supermodel and twice as bland) and Timothy Olyphant (somehow retaining his characteristic ice cool through this idiotic role). Normal humans in every aspect, except they can fire energy bolts from their hands and say Mogadorians with a straight face.

But let’s get past the utter lack of imagination in once again making intergalactic aliens able to morph into human shape (and then not utilizing that shape-shifting ability when it would actually be worthwhile – like when they’re recognized by Mogador– sorry, I refuse to say that word again, in case I have to run for Congress one day).

In a movie rife with stupidities, here’s the apex stupidity that drives the prosaic plot: the good aliens (the ones who have morphed into blond supermodels) can only be killed in numerical order. Pettyfer, so he tells us, is “Number Four,” and One through Three have been killed in requisite order, so now it’s his turn. Again, I urge you to discard any queries about how aliens have a numbering system that is identical to our Roman/Western European idiom that developed over millennia. Any pondering over this fact will result in running for Congress.

Number Four falls for a blond high school chick with a big nose who is actually blander than he is (Dianna Agron) and before we can question whether convergent evolution has outfitted his intergalactic man parts to fit her trailer trash girlie parts, they are bonding on dates by running from evil aliens together. Big Kevin Durand is the eight-foot tall evil alien commander, whose gilled nose is even uglier than Agron’s. And before we can ask why alien Four would be attracted to an organism who isn’t even on his species line, we realize the story has gotten too stupid for us to care, as big special effects battle other special effects and in the midst of running from aliens on one of their dates, Four and Big-Nose stop at her high school dark room to develop some sweet 35mm pictures. Now before we can ask why this teen in 2011 is still using film rolls in her camera instead of using a digital camera like everyone else on planet Earth, we realize there are some questions best left unasked, in case some idiot answers.

Teresa Palmer is Number Six, one of the New Wave Of Fantastically Gorgeous Blonde Bims, flaunting her bim-bone like a baboon in leather-panted estrus. When Number Four meets her in a blaze of sensual lightning, teleportation dynamism and Thigh Kwon Do, we wonder how he could ever consider going back to the ugly-nosed human chick who isn’t putting out because of primitive Earth customs.

When you aim your movie at teens, I guess you’re hoping that none of them realize every single frame is ripping off someone else’s style, story, substance, character, concept, clothing, hairdo, jawline and telekinetic abilities. D.J. Caruso directs this milky ride into explosive mediocrity, from a series of novels by two witless authors whom it is no surprise use a collective pseudonym – Pittacus Lore (Jobie Hughes and James Frey).