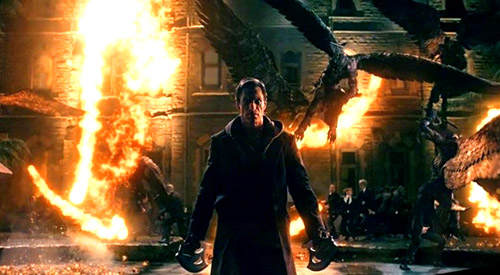 When holy barbecues get outa hand…

I, FRANKENSTEIN finds Frankenstein’s Monster in the modern world (which still resembles a big and brash medieval fantasy), immortal, an outsider caught in a war between two immortal clans – the Gargoyles and the Demons – that could damn the fate of humankind… if only humankind gave a toss.

Aaron Eckhart, ripped like a bridge cable, is the Monster, birthed from electric eel in the 17th century, walking the Earth a hunted, soul-less being. Dubbed Adam by the Gargoyle Queen (Miranda Otto, who looks like Jodie Foster when the light hits her at almost any angle), he’s fast, furious and toyt like a workout queen.

Adam (simply called Frankenstein as an easier point of reference) is sought by the Demon Prince Naberius (played with vampire brio by none other than vampire king Bill Nighy, UNDERWORLD), to discover the secret of how he could be animated and still have no soul. Naberius has been collecting soul-less corpses for centuries and apparently only soul-less corpses can be possessed by demons, so once he discovers how to animate the corpses, he summons his demons to inhabit this army to do his bidding on Earth. Yes, I’m asking the same questions as you: Was he banking on discovering Frankenstein at some point, even though he was probably collecting corpses long before Victor Frankenstein’s time, and what was he doing in the meantime when he needed evil helpers and all his corpses were just laying around gathering slime? But I call “bullshit” on “only soul-less corpses can be possessed by demons” anyway! What about THE EXORCIST, THE OMEN, THE LAST EXORCISM, THE EXORCISM OF EMILY ROSE, et al? Sigh. Onward…

So the Gargoyles, led by stone warrior Gideon (Jai Courtney) try to keep Franky away from Naberius, who has human scientists working for him, trying to emulate Victor Frankenstein’s infamous life-creating experiments. Female scientist Yvonne Strahovski (desperately looking like Rosamund Pike) would become Franky’s insipid “love interest,” if only he could stop staying out all night slaying Demons.

It’s an interesting plot pitting Frankenstein against two factions as a pawn in their war (from the graphic novel by Kevin Grevioux), but it’s executed with flash in stead of flair by screenwriter-director Stuart Beattie (only his second directorial effort, his writing credits including DERAILED 2005, AUSTRALIA 2008). Too much flash. Every time a Demon dies (or is “descended”) fireballs coruscate around the screen interminably, obfuscating the action. And every time a Gargoyle dies (or is “ascended”) a blue light like a stairway to heaven also obfuscates the action. In a lethal battle between Demons and Gargoyles, it’s a glam-slam Macy’s Christmas lightshow. And the ending – with fireballs ascending from hell into thousands of bodies on racks, and the CGI gargoyles killing them and turning them back into fireballs, and the mansion exploding and falling back into hell – is like a Disneyland fireworks display meeting the finale of a KISS concert. My eyes! I’m blind!—

It’s now a tossup between the ripped Aaron Eckhart and the solid Thomas Jane for the exact same roles. Who woulda thought the doughy guy with the porn-stache from YOUR FRIENDS & NEIGHBORS (1998) would make such a fantastic action hero? He’s alive! ALIIIIIVE!