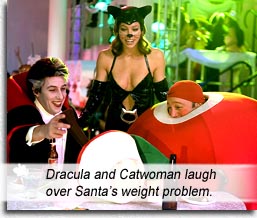 I NOW PRONOUNCE YOU CHUCK AND LARRY finds Chuck (Sandler) and Larry (James) as two straight firemen who pretend to be gay married partners for the sake of insurance benefits for Larry’s kids, that would otherwise be lost due to Larry being a widower.

Roundabout way of arriving at a stupid premise, brought about by a law so stupid, you just want to congress-bash the congresspeople who gay-bash gays through their bureaucratic poison pens.

However, stupid premise arrived at, movie makes the best of it, and though it initially seems like a caricature of how straight guys perceive gay guys (thereby wantonly verbally gay-bashing), it settles into a watchable comedy, with the inevitable tolerance messages delivered without making us cringe too much.

Despite its shaky beginnings (in setting Sandler up as a ladies man for caricatured coquettes), Sandler and James pull off performances surprisingly sensible, funny and poignant. Dan Aykroyd is their principled fire chief, Steve Buscemi is some kind of unfunny government snipe, Rob Schneider sneaks under the radar with an uncredited role as an Asian Minister, and spankin’ Jessica Biel provides the much-needed estrogen in this movie really targeted at breeders.