I, Human, even whilst viewing the first trailers of I, ROBOT, knew that They, 20th Century Fox, were destined to make Film, Botch-up. 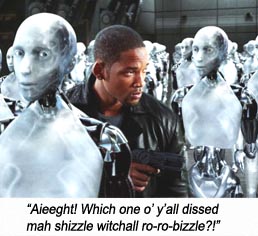 Sure enough, this movie bytes!

Pounding home the sordid fact that Big Studios – as cookie-cutter idioms unto themselves – must morph any greed-driven, blockbuster-bent story from cerebral concept to popcorn-glutton whiz-bangery, I, ROBOT is a tragic depravity of speculative fiction writer Isaac Asimov’s complex vision; an unrecognized mutation of the compendium of intriguing Robot Stories revered by readers through the decades.

Thank you, Hollywood. Thank you so bloody much.

Before Asimov’s death in 1992, speculative fiction deity Harlan Ellison collaborated with him on an early screenplay of I, ROBOT, but the usual industry discombobulation and improprieties left the Last Writers Standing as Jeff Vintar (FINAL FANTASY – the first fully computer-animated movie) and Akiva Goldsman (whose breadth covers the jejune BATMAN AND ROBIN to the earnest A BEAUTIFUL MIND; for this job, calling upon his BATMAN skill set – Holy Insensibility!).

Premised in a society conversant with the Three Laws of Robotics (which safeguard humans against robot mischief whilst granting human mastery over robot will), the movie’s opening sequences echo hollowly Asimov’s grand expositions, as Detective Spooner (Will Smith) investigates a scientist’s (James Cromwell) “suicide” which seems to point to a Murder By Robot. Smith’s smugness wears thin almost immediately. 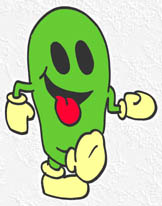 The last vestiges of his SIX DEGREES ingenuousness seem to be evaporating, as he morphs into a major shameless player in the industry here, the fact he is the whitest wigga in the movie not fazing him in the least; wool cap pulled snidely over only one ear (in an attempt to convey some sense of futuristic fad), taut t-shirted torso (naked in his first scenes – a shout out to da laydayz!), sneakers from the Year 2000 (oh! – you go, retro-girl!) and long, black, Beyond-Badness leather coat. Sure, it’s Los Angeles 2035, but unless Earth’s precessional axial tilt has stepped up speed and driven the city into higher and colder climes than its 23-degree-north latitude, no one in LA really dresses like that – not even in this movie – unless they’re attending a film premiere, making a music video, or a nouveau-trash summer blockbuster.

Spooner, irritated almost all the time, smart-mouths his way through his scenes as if AKSING for a slap upside his bitch hayd, only much later in the film expositing a rationale for his surliness – years ago, a robot chose to save him over a drowning child, relying on mathematical probability rather than emotion (ripping out his arm in the process, necessitating a bionic replacement), he maintaining that a “thinking, feeling being” would have tried to save the child no matter what the probability; thus, his hatred for robots and distrust of people who create them. Nonetheless, it is still an unnecessarily sour performance that offers little wit to alleviate the constant puss on his face. “Attempted wit” doesn’t count.

One of Asimov’s foibles (if I can call it that without being stoned for sacrilege) was that he avoided expounding on sex to a fault, thereby making his recurring female character from the Robot Stories, robopsychologist Susan Calvin, as coolly sexless as the automatons she is ironically empowered to “make more human.” As Calvin, Bridget Moynahan pulls off this idiosyncrasy so effectively that we cannot imagine her having been touched by any mammal, let alone a man. When she does touch Spooner, it is purely a technical examination of his bionic arm and – double irony – it comes off as sensual for its very perversity!

Director Alex Proyas, who wove the noir visions, THE CROW and DARK CITY, seems like the perfect choice for a dark Asimov tale, but has noticeably caved to Big Studio demands with this production, structuring it as simply as a knucklehead video game; no small coincidence that the movie’s drawcards – the robots – look like any given “gamer” characters; we catch ourselves thinking how incongruous they often look in this film’s three-dimensional (not 3-D) world.

The Robot glitch which our human protagonists must monkey-wrench back to normalcy is the over-played “Humanity is a Danger to Itself” card, telegraphed to absurd (though, plausibly realistic) proportions by the master computer, acronymed VIKI, who empowers the hordes of gamebots to enforce city curfews and house-imprisonment, so that Us Dumb Humans won’t blow us-selves up. Needless to say, the sourpuss hip-hop refugee and frigid heroine (whose severe convent hairstyle gets progressively more sensual during the third act as she exhibits more lubricity towards Spooner) win the day.

The Human glitch in the making of this movie was in ignoring the inherent irony of Asimov’s title, “I, Robot.” The “I” signifies a Descartian self-awareness, a facility which robots – by definition – should not possess, thereby making the title an oxymoron. Asimov, understanding this, structured each Robot tale as an examination of the complexities, paradoxes and conundrums of bequeathing machines artificial intelligence. In the film, this aspect is given a cursory nod in the form of Robot “Sonny” (voiced by Alan Tudyk) whose sentience is poignant and almost slips the movie past Asimov aficionados, until those idiotic scenes of robot hordes chasing down and attacking Spooner, intoning, “You are having a car accident!” remind us what a big bowl of wrong this movie is. To further gouge Asimov’s concepts, Sonny is able to override the Three Laws because – well, because Vintar and Goldman say so – to help the Noble Humans defeat the Bad Machines…

Asimov drew the sentience theme to its logical conclusion in his disturbing short story Bicentennial Man (brought to the screen in 1999 by director Chris Columbus and Robin Williams – with as much homogeneity and popcorn pap as this stinker).

Where are Lije Bailey and R. Daneel Olivaw when we need them?

Poffy’s review on imdb
Word Count: 900     No. 74
The 20th Century Fox movie, I, ROBOT, is wholly misrepresentative of the late, great Isaac Asimov (1920-1992). Visit his (very non-futuristic) website for further info on The Robot Stories, Galactic Empire novels and his timeless Foundation series.