I think I hate this movie.

Chris Rock is a powerful force. I love the guy. But in I THINK I LOVE MY WIFE, this mighty black man looks mighty beige.

Even in the lamest of his starring vehicles, Rock’s individual voice and common sense messages shine through. But the character he plays in LOVE MY WIFE is a wishy-washy departure that demeans him, his fans and his perceptive observations on relationships. 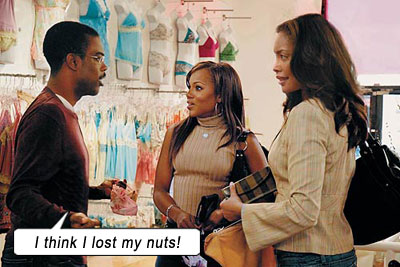 Rock has risen from an underprivileged racial comedian to the most energizing and insightful African-American/comedic voice since Eddie Murphy and Richard Pryor. Remember the furor over his hosting of the Academy Awards in 2005; how the producers quivered at his renegade image as much as the crowd quivered at his vital energy? In tilting at the mainstream with this dull, vapid “comedy” it will be awhile before there’s any more quivering around Chris Rock.

In I THINK I LOVE MY WIFE Rock is a “happily”-married ad exec who meets an old crush (Kerry Washington), who provides the laughs and sensuality that his wife (Gina Torres) doesn’t. After being led along by the crush (and steadily pussified), he ends up breaking it off with her and staying with his boring wife, who suddenly, we presume, becomes unboring. Because the script says so.

I’m terribly disappointed in him. He co-wrote, produced and directed LOVE MY WIFE, so full marks for designing the wheels, putting them on the vehicle and driving the vehicle – but if you’re gonna drive into a tree, well… If he is satisfied being this unfunny and inoffensive and homogenized, he might as well be Julia Roberts.

There is only one good line – and it bleeds of the Rock of old – yet Rock chose to put these words in the mouth of his boss: “You can lose a lot of money chasing women, but you’ll never lose women chasing money.”

The rest of this simplistic, clichéd and tired movie can be summed up in one word: pussy-whipped, hypocritical, ball-less, suffocating, stultifying, deceitful, frustrating, emasculating, sexually-demeaning, gutless, mundane. Take your pick.

Before his formative years at SNL and before NEW JACK CITY (1991) put him on the movie landscape, Rock appeared in a standup special, COMEDY’S DIRTIEST DOZEN (1988), featuring the far more professional raconteur Bill Hicks (1961-1994) and a young, grunting – and funny – Tim Allen. Rock was a rough-edged angry black kid back then, all lion pacing and racism jokes, still honing his chops.

But the grave lesson here is what happened to Tim Allen. The gods of mediocrity ate Allen alive when he swam into the mainstream; though Rock’s mainstream movie career is nothing to crow about, he at least retained his persona and therefore street cred. With LOVE MY WIFE, in trying to force an uncharacteristic pussy persona onto himself, the Gods of Mediocrity have come knocking ominously at his door, “Mr. Rock, your time has come.”

The message that LOVE MY WIFE tries to convey is undermined by one of its very own characters: Steve Buscemi is Rock’s friend, a married man and philanderer – yet portrayed as the most well-adjusted, likeable, sensible, noble person in the film, despite the film saying that fidelity alone will make you all those things. If anything, Rock’s forced, guilt-ridden fidelity drove him to become a soppy bitch who nearly ruined his family by almost losing his job.

Rock narrates the film’s contradictory syrup message, “You can’t chose who you love – but you can chose HOW you love.” After trying to figure out the mathematics behind that idiocy, we realize the film has shown us “how to love” – with Buscemi’s character: compartmentalize. Love someone wholly, but don’t deny your manly urges on occasional fluff. After all, your woman was attracted to your manly urges – she didn’t want a eunuch! – how can she demand that you quell those urges and then turn them on at her behest? Isn’t that a form of psychological abuse?

Rock narrates, “I want a woman who’ll go to war with me and drag me and the kids out alive!” Sounds good – but metaphysical JUNK! Means nothing after Rock has established his marriage is sexless. You want a wife or a Special Forces operative?

Like a sycophantic Jell-O mold, Rock apologizes to his wife – even though he never did anything adulterous (even though he was thinking it, but was too gutless to act on it or even admit to thinking it – but that’s another self-deceit encyclopedia) – and, we presume, lives out his days in obedient sexual frustration. Seems the only person quivering in this movie is Chris Rock.

Crush accuses Chris of having “nigger ears” regarding his taste in black music. (Spelling it “nigga” doesn’t curb its phonetics.) When this movie airs on network TV, the censors – that braindead coterie of tin-eared hypocrites – deigned to replace “nigger” with “negro”… Now try to figure THIS out:
In 2010, the Census Bureau caught RACISM HELL for including “Negro” on their form; in the same year, Harry Reid caught as much Whitey hell for a past quote about Obama not having a “Negro dialect.” Now tell me, if Negro is verboten, what is it doing on network television IN PLACE OF NIGGER? Does this say something about networks or niggers? Negro, please!