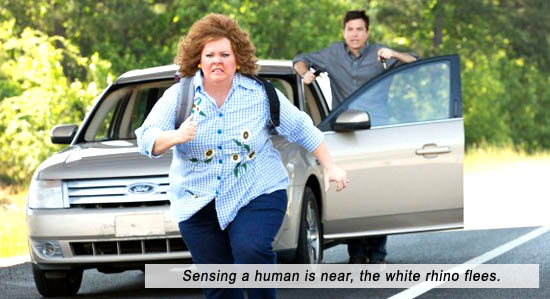 Almost as bad as being defrauded.

Hello, I am Nigerian Prince and I would like to inform you of the necessity to send me your account details, so that I may warn that IDENTITY THIEF will steal two hours of your wretched life. Please to send your bank account just now for processing this timely request.

Jason Bateman and Melissa McCarthy star as victim and identity thief respectively. Both undoubtedly great comedic actors, and I have no problem with the fact that they and the rest of the cast and crew have to work to feed their kids and pay the bills, and that making movies is their job…. but as to making a movie with the premise of an identity thief that is lovable and funny and predisposed to redemption – you lost me at apologist for motherfuckers who deserve to die slow deaths.

Has anyone in this production been defrauded? Then they’d realize it is NO laughing matter. Identity thieves are one step below telemarketers. And telemarketers are not even human. Like telemarketers, identity thieves have NO redeeming qualities. Why does this movie exist? I’ve been defrauded twice (no, not by Nigerian princes – by hackers – so don’t tell me my information is secure, Bank of Fucking America or AT&FuckingT!), and both times it has taken its toll on me psychologically and financially, in ways that cannot be described. And certainly in no way that this breath-stinking dog of a movie portrays.

Everything else is wrong.

Movie moves quickly to the idiotic premise that once the police do nothing to apprehend the identity thief (McCarthy), the victim (Bateman) goes on the road to Bring Her Back Alive. Stupidity follows in his wake, as the execrable script keeps leaning its sympathies towards the identity thief, as if her orphaned, abandoned past has ANY BEARING AT ALL on this practiced livelihood she has built for herself around stealing the identities of others. And even if it does, why does Bateman’s character have to fall for her sob story and repentance? Isn’t her repentant demeanor just another tool in the trade of a true grifter? If it’s a guy, yes. Hot chick, yes. Fat chick? Well, that’s why the movie makes her a fat chick – it has be real because fat chicks have less options. (Hey, I didn’t make the rules, I’m just outlining them.)

Eventually, we see this confused movie doing what all road/buddy movies do to its protagonists – make traits of each character rub off on the other. In other words, it turns Bateman into an identity thief and gives McCarthy the opportunity to weep for her sins. What are you people DOING? Identity thieves do not need this sympathy from us, who are all, via our footprints in this technologically linked society, their potential victims!

The stars do their best with this shameful abomination: Bateman is, as always, one of the world’s best straight men; McCarthy is a good actress and (congruent with the rule that hot chicks are not funny and that fat people tend toward better visual gags) is pretty funny in places, when her character is not irritating me; Amada Peet is Bateman’s dutiful wife, Jon Favreau does Bateman’s arrogant boss as only he can, Morris Chestnut is the uncaring police officer. Pointless asides include skip tracer Robert Patrick, hot on the trail of McCarthy to terminate her, and a couple of hot assassins trailing Patrick to get to McCarthy first (T.I. and Genesis Rodriguez).

Seth Gordon (HORRIBLE BOSSES) directs adequately from one of the stupidest scripts written for the screen, by Craig Mazin (THE HANGOVER PART II) and Jerry Eetin.

Before I go, please to send me your name, credit card and social security number, so that I may transfer to your bank account in the sum of $1,500,000.00 American dollars. Oh, you don’t find that funny anymore? You were just laughing at the fat chick doing it. Won’t you forgive me on accounta my checkered past and abandonment issues? I’m really a good person deep down inside. And I can get fluffy and lovable and crack jokes if that would help. And I could really use your mother’s maiden name.