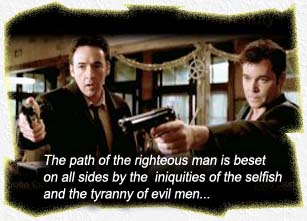 With most viewers being either misled by this movie’s similarities to Agatha Christie’s TEN LITTLE INDIANS, or just pompously broadcasting their knowledge IDENTITY was inspired by it, they missed the point this was not a “murder mystery” per se, instead, a finely-crafted journey through the mind of a multiple personality during the course of purging his violent personas.

Ten guests are flood-stranded at a Nevada Motel; among them, John Cusack, former cop and Go-To Everyman, Rebecca DeMornay (almost unrecognizable with her ample boob-job and burgundy hair, playing a character whom she is assuming the mantle of with each passing botox-ed day – a woman who “used to be that actress”), Amanda Peet (whose stage direction was simple – “Back that booty up some more, honey!”), John C. McGinley playing against type as an uber-dweeb, Jake Busey playing exactly his type – uber-psycho, Ray Liotta – always darkly mysterious…

One by one, these refugee guests start dying all Agatha Christie-like. 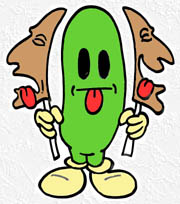 Intercut with this storyline is a somber eleventh-hour appeal by doctors and lawyers to an ill-tempered judge to stay an execution of a deranged man (Pruitt Taylor Vince, his jerky eyes doing double time Pong). We are intrigued as to how these two disparate tales are related, but we do sense a connection, because the dry, somber doctors are talking about a “killer” and in that wet parallel Motel story there are KILLIN’S GALORE.By the end of the second act, after the film’s most hair-raising moment, when all the corpses at the Motel are found missing, it is revealed the Motel scenes have been taking place within Pruitt’s psychopath mind, and each Motel guest was merely one of his multiple personalities.

Have I given away too much? Is it just another Patrick-Duffy-shower-scene cop-out? All this rain-drenched piling in and out of rooms like the Spanish Inquisition with shocked pusses was merely a psychopath’s IMAGINATION? Guess again. Director James Mangold and writer Michael Cooney are only half-finished with their sleight-of-hand.

The true “twist” of the movie is that the doctors in the real world believe they successfully purge the psychopath’s “killer” persona, but in the last few seconds, we discover the cure did not go deep enough.

With all the options this movie had – to blame spirits from an Indian Burial Ground or to wrap on a Patrick Duffy note at any point, the writers led us on a merrier, more interesting goose chase. It is clever without being snide, shocking without being implausible.

Thus, this deponent sayeth: Bravo to the road less traveled.

On the other hand, my “feminine personality” thought the movie brutalized women too overtly and my “killer psychopath” personality is going to make the film-makers pay for giving away my secrets…