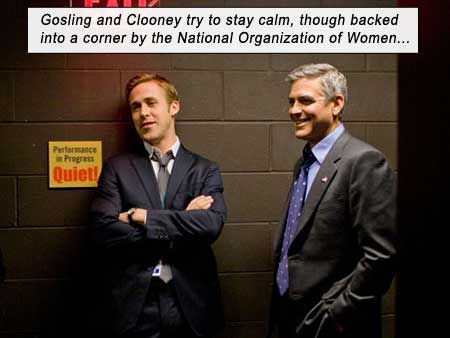 THE IDES OF MARCH opens with campaign manager Steve Meyers (Ryan Gosling) at a podium, spotlit, declaring, “I’m not a Christian, I’m not an atheist. What I believe in is the Constitution of the United States of America.” He is reciting from prepared notes for his boss, the Governor, doing a line check* before a debate. As every movie should try to encapsulate its theme in its first few lines – if not its first line – these lines would prove to be wretched irony coming from this character.

Meyers starts as a staunch idealist, campaigning for Governor Morris (George Clooney, oozing charm like it was his to patent), in a race for the Democratic nomination for president of the United States, against another Democrat who wouldn’t know charm if George Clooney bit him on the ass with those perfect teeth. At first, Meyers is seduced purely by the game of politics (and the man-charm of Morris); then he is seduced by an intern, by the opposing campaign manager, and eventually by the prospect of the White House. Under the pressures of Beltway duplicity his cognitive dissonance as an idealist is soon shrugged off, to reveal his true agenda, identical to all the swine that sup at Washington’s filth-ridden watering hole – to retain their jobs and elevate their status no matter the lives destroyed in the process.

In Washington, there is really no ideology further than the retention of your job.

This intense drama involving unethical relationships, disloyalty, duplicity, deceit, unfaithfulness, hypocrisy and extortion is thankfully NOT set in Republican World. Why is this a good thing? Because in Republican World, these things are taken for granted now; not even satire anymore to portray Republicans as godless hypocritical swine. The rational world just knows that they are – and that’s that. However, setting this tale (written by Beau Willimon as the play Farragut North) in the Democratic arena shows us that the Democrats are not the antiseptic angels they make themselves out to be in the media, leaving the irrational, contrarian Republicans nothing to rail against. The Repubs can’t possibly call the Dems holier-than-thou now, as this movie shows us the backstage backstabbery that goes into the onstage meaningless platitudes. We see behind the fake smiles and boilerplate promises to the pants around the ankles. And the Dems look every bit as ugly as the Repubs from this bumcrack angle…

But there’s nothing ugly about the top of the bill. Abreast of the two movie stars (Gosling and Clooney) are the two Actors’ Actors – Paul Giamatti and Philip Seymour Hoffman. Hoffman is Gosling’s boss, Paul Zara, and Giamatti is Tom Duffy, campaign manager for the opposition.

Talent, Cred, Looks – who gets what?

Movie opens with hot young intern Evan Rachel Wood bringing coffee. She seduces the Big Man On Campus, Meyers, who tells her in no uncertain terms that their fling should remain secret. Situation gets very complicated very fast. Not only is she the Democratic National Chairman’s daughter, she has slept with married Governor Morris. Just once, but enough to get her pregnant and needing an abortion. Way to throw a damp towel over a hot, forbidden, secret relationship. After supping at the idealist Kool-Aid, Meyers soon feels the vulture of cynicism pecking at his shoulder. And the wounds can only get deeper.

Earlier, Time Journalist Ida Horowitz (Marisa Tomei) hammers reality into Meyers, who almost naively proclaims his man has to win “for the good of the country.” She lays out exactly what’s at stake if he doesn’t win – nothing. “Or what? The world’s gonna fall apart? It won’t matter one bit to the everyday lives of the everyday fuckers who get up and work and eat and sleep and go back to work again. If your boy wins, you get a job in the White House. If he loses, you’re back in a consulting firm on K Street. That’s it….”

Later, Morris will speculate that Meyers might “end up in a nice little consulting firm off Farragut North…”

Meanwhile, Tom Duffy, in plain sight, maneuvers Meyers into an ambush, calling him in for a secret meeting to try to coerce him away from Morris’s campaign. Meyers declines the job offer, but his boss, Paul Zara, finds out about the meeting. And Meyers is sacked. When he goes crawling back to Duffy for the job, Duffy kicks him out, explaining his strategy: “As soon as you sat down in my chair, I knew that I’d won. If you come work for me, you’re not working for Morris; if he fires you, you’re still not working for him. Either way I win.” As devilish as any Republican tactician, which Duffy knows full well, telling Meyers that it’s about time Dems got down in the dirt and did what Republicans have been doing so well for so long.

Chris Matthews makes a cameo, in what is becoming almost a second job for him – appearing in political movies. The magnificent Rachel Maddow also makes an eyeblink cameo. Charlie Rose gets a nice chunk of screentime. Producer credits include Leo DiCaprio and Grant Heslov – he and Clooney seem to be real pals, working on numerous projects together.

Uh-oh. Dead intern. You don’t wanna be in the midst of THAT scandal…

I wonder: Do Republicans like George Clooney? He downplays to his heart’s content, being the B-character and (excellent) director, letting the limelight fall on Gosling, Hoffman, Wood and Giamatti, yet his Governor character gets in some good cracks about the Republican clown show, about not giving the rich extra tax breaks, and pointedly remarks about derogatory spin on socialism and “redistribution of wealth.” IDES is the 2012 election season on film. As in GAME CHANGE, we do get a teeny tiny tahny insight into political machinations beyond the ken of journalists: what the campaign can offer one senator to gain the support of his delegates, thereby discerning whether they will win or lose certain states. After the bribes, it’s down to mathematics. It’s refreshing to see their offstage demeanors, no mincing of words, liberally sprinkled with expletives, wholly removed from their homogenized onstage personas.

The message of this movie is simple: Bad Guys Always Win. The blackest of heart, the most duplicitous, the most ambitious against all odds and against any integrity will always win. Because those platitudes about loyalty that Hoffman declares, those empty banalities about the goodness of America that Morris articulates, are all flushed away in the endgame. Meyers confronts Morris over his indiscretion with the intern, blackmailing Morris into re-hiring him as campaign manager.

“You can lie, you can take the country to war – but you can’t fuck the interns!” Is that in the Constitution? I think so. That’s why Clinton was impeached for fucking one person in the mouth and W still roams free for fucking three hundred million in the ass.

Last quiet shot of Meyers, head bowed, is held indefinitely as he is readied for a TV interview – then he looks into camera; a shot as enigmatic as the best final face-shots from THE GRADUATE, MANHATTAN, CAST AWAY, et al.

* Check-one-two, check-what-who-now?
It’s obviously Steve’s job to run mic checks, so he asks the sound engineers to raise the monitor levels – then doesn’t stick around to check the levels! Not because he’s a slacker, but because the screenwriters who wrote that dialogue are just parroting jargon that they hear us rock guys mouthing from the stage and don’t have a clue what it means. (Same idiocy happens in CRAZY HEART.)

It means that he wants the speaker(s) facing him to be a bit louder. Now if he simply walks away after asking them to “raise the monitor level,” how is he going to know whether they’ve raised it to the level that he wants? Will it be too loud? Not loud enough? All he had to do was say one more word into the mic and then give his approval or not. It’s surprising that the filmmakers (who also deal with this exact issue while making films – they know what monitors and sound levels are) never bothered to correct this ignorance.

Sexiest Man Not Dead.
IDES reminds us of Robert Redford and Brad Pitt in SPY GAMES – Sexy The Elder and Sexy The Younger – the sexiest men alive of two generations together in one movie. Here it is Clooney The Elder directing himself and Gosling The Younger, together in one flesh-fest. Funny how People Magazine add “Alive” to the title of Sexiest Man, as if not adding that qualifier, the prize might accidentally go to River Phoenix or Rock Hudson, or maybe Johnny Weissmuller or Samson.

But then, it’s not really about the sexiest man alive either, is it? It’s about the sexiest man alive IN THE ENTERTAINMENT MILIEU (whether that be film, sports, music – but mainly film). When was the last time they nominated a 26-year-old farmer who’s been working the land with his bare man-hands, chiseled Channing cheeks, untamed Wolverine mane, and a body like early Rambo under those rugged sexpot overalls with nothing on underneath? Royt….

Now You See It – Most Times You Don’t.
Though Plutarch writes of a seer warning Julius Caesar that harm would come to him no later than the Ides of March, and though this meeting was immortalized by Shakespeare (“Beware the Ides of March!”) I seriously doubt any seer truly “foreseeing” Julius Caesar’s death. How hard is it to “predict” the death of a world leader? It’s like someone “predicting” the assassination of a president. Since any world leader is always at risk of being assassinated, prognosticating it just puts a 50/50 bet on the table. If it never happens, that’s good, but if it actually happens, suddenly the prognosticator is a “prophet.” I’d be more impressed if you foretold the untimely death of an accountant who works in a cubicle, with no wife and two cats, who takes the same train to work on time every single day and never takes vacations. That would be amazing.

But let’s take it as written that a seer did warn Caesar. It must be the first time in history that a prognostication actually came true! Because in movies, as in most tales, NO prophecies ever come true – yet no one seems to notice! From Jesus Christ to Darth Vader, from THE MATRIX to THE WOLVERINE, prophecies never come true. Yet Julius Caesar’s prophecy actually came to pass!

That prophet must have been eating out on his prediction for the next XXXV years!