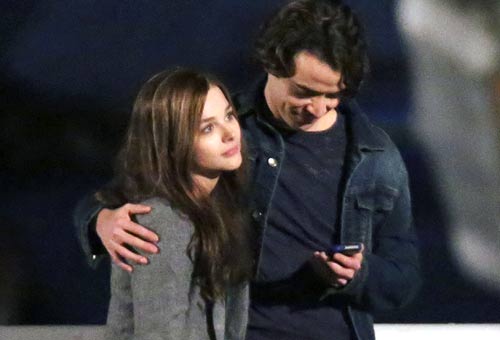 Arm around Chloe Grace Moretz, eyes on cellphone —
Definitive Portrait Of An Asshole.

I thought I was out. But they pulled me back IN….

Chloe Grace Moretz stares at herself sleeping. I can think of worse ways to spend eternity.

After a family car accident that puts her into a coma, 17-year-old Mia (Moretz) wanders the hospital as a ghost, wondering, IF I STAY… what’s in it for me? And that’s this movie boiled down to its essential motivation.

IF I STAY is constructed well (directed by R.J. Cutler, THE WORLD ACCORDING TO DICK CHENEY, who comes out of TV and docu mode to make this feature weeper), flitting between the Now – hospital coma scenes – and the Then – Mia’s life and love leading to the Now. The premise (whispered in her ear by a nurse) is that only she can choose to Stay or Go, no matter the attending doctors’ expertise or the machines that go ping, or even any unmentioned deity. And the structure of the story supposedly keeps us on edge as to what her choice will be, rollercoasting through flashbacks that alternately make us believe she has found her true calling with the cello (so she’ll STAY, right?), but then hearing that her parents didn’t survive the crash (so she’ll GO, right?), but in the next flashback, revealing she met a neato boy (so she’ll STAY?), but he’s leaving her to go on tour with his signed rock band (so she’ll GO?), then she’s accepted into Julliard Music School (so she’ll STAY?), but her little brother doesn’t come out of his coma (so she’ll GO?)… and on and on this tomfoolery bats us about like playing ping pong in Ding Dang…

An interesting structure, but at its root, merely about a person asking herself, What is there to live for?; ultimately, What’s in it for me? The story (written by Shauna Cross, from a Gayle Forman novel) displays an arrogance in making us wait around for her decision. If – as the nurse says – it’s up to her, then just WAKE UP. Why are you wandering around the hospital like a wet dog smell? Is this the christian version of limbo? Purgatory? And if your whole family is either dead or in a coma, where are they? And I’ll grant you that whole “ghost/disembodied state” or the residue of a soul blah blah – but since when do clothes have souls and ectoplasmic residue? I’ve railed against clothes-souls for decades now, and if there ever was a time when I didn’t want them to appear…

Mia’s cloyingly cool parents are Joshua Leonard and Mireille Enos, who used to be hippies (dad, an ex-drummer in a touring band), and relate to Mia’s attraction to the insurrectionist crowd. The new boyfriend is Adam (Jamie Blackley), guitarist in his own vapid mediocre pop band, who is somehow signed and put on tour with his unremarkable flat voice, second-rate songs and third-rate guitar ability. Gramps is Stacy Keach, shining above this crowd of actors like they’re dolly grips. Dialogue wishes it was written by Diablo Cody. 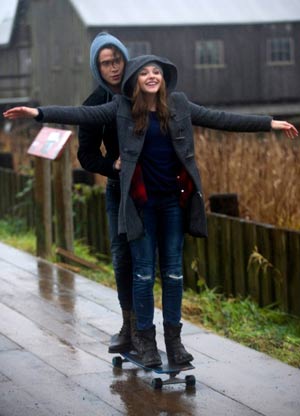 It seems at first like the movie is taking a risk by making Mia a classical cellist – a cool departure from tween norm – until we realize it is just a character device to make her “noble,” so that pining for a boy during her coma wouldn’t seem like typical girly whining. And though they made Adam a moderate musical success, the writers utterly disrespect his career and art by making him blab empty promises to comatose Mia that he is going to give up his career and follow her. If only she’ll STAY. Who cares about rock and roll, right? His actual record deal – which would probably dissolve ignominiously in a few months anyway (but that’s besides the point) – can go shit on a stick; contractual obligations be damned, he’s going to cleave to THE NOBLE CELLIST wherever she may lead. This theoretically makes him noble as well – at least in the eyes of 12-year-old chicks who think he’s dreamy. Let’s edit and distribute this maudlin tearjerker before anyone stops to think if his promises are going to hold water if she wakes up braindead or crippled, or if she can’t move her thighs into that angle he likes so much.

None of it mattered to me, as I was only here to drink in the glory that is – Chloe Grace Moretz. The most beautiful woman on the planet. Straight-edged nose, velveteen voice, blond abandon and those sensuous anemone lips. I’ll longingly gaze at her flickering frame-rate in whatever she chooses to appear, dreck or not. Our love would be pure. Our love would be chaste. Our love would be STAR WARS Cantina Sequence…

Movie would have retained more cred and enjoyment had it followed her cello career, but that is not the point of this manipulative teen romance disguised as a treatise on nobility. (Chloe’s onscreen playing is artfully composited, and if you look up how it was done, it becomes distracting, so I’d suggest just believing Chloe Grace Moretz learned how to play cello like a virtuoso.) After an audition, Gramps tells her, “You have something special. Your dad had it too.” Man, everyone’s got something special – but most people live in the real world where that specialness is stamped out in favor of pragmatism. We’d all like to be professional artists, Gramps, but try it and see what happens. Hell, look what happened to her dad – that other guy with “something special” – he gave up his drumming career to raise a family (- he couldn’t’ve been that special then…). Mia can “play her heart out” all she wants, but if no one in a position of power contracts her as a saleable commodity, she can go to her grave having something special, and the world will keep turning without ever knowing or caring.

SPOILERS TO FOLLOW. (But they’re only Spoilers if you’re under-14. To everyone else, this denouement is obvious from the moment we viewed the trailer three months before the film’s release.)

It’s the predictable end to a tween tearjerker. Two cute people. She wakes for love. How “noble.” Yet not once did she check her chart to see if she had any amputated fingers, or if her spine was snapped. And has anyone considered that Mia’s conscious self now has to absorb the news of her dead family for the first time? We take it for granted she already knows – but that’s only her out-of-body self. When she regains consciousness, her memories will revert to prior to the crash. And her family will be ripped from her – but this dopey guitarist is still hanging around like a dog fart! Immobile, tubes, covered from chin to toe, exactly what injuries did she sustain? I don’t wanna be the cold bucket of water, but is Adam going to keep all those hollow bedside promises, or will he hope she never heard him and sweep them under the rug? These kids are 17 and 19 respectively, with career paths that are set to take them around the world separately. Does anyone in the film world or the real world believe this is an eternal love that will last longer than a lunchtime?

IF I STAY was released in August 2014, the same month I died. While I was wandering naked through limbo – after forcefully removing my clothes-souls – my wish was to GO, because no matter what I came back to, I was going to be checking out again sooner than later anyway. But then I remembered that if I stayed for Love, that other person would have to love me back, because of my devotion. Because my love is pure. Because my love is chaste. Yes, that was it! I would STAY for the love of a good woman.