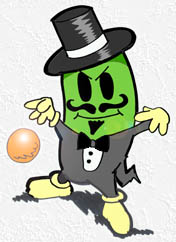 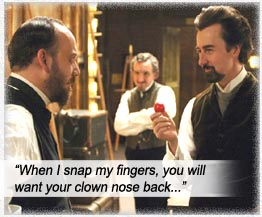 In a movie about misdirection, the opulent production design, set decoration and sumptuous cinematography of THE ILLUSIONIST serves to misdirect the audience into believing that there is something more profound at stake than the Getting of Panty.I can pinpoint exactly where THE ILLUSIONIST loses its footing: during afterglow, Eisenheim the Illusionist tells Duchess Sophie, “The only mystery I couldn’t solve was why my heart couldn’t let go of you.” Quantum groan.

Up to that point the movie intimated it was about a master mystic delving into occult knowledge, seeking forbidden illusions and tempting unholy fates, but with that George-Lucasoid line, it showed its hand – its objective was simply to reunite star-crossed lovers. Again: groan; simultaneously, pay less attention so manhood remains intact.

Originally a short story by Steven Millhauser (Eisenheim the Illusionist), written for the screen and directed by Neil Burger (only his second filmic offering), THE ILLUSIONIST probably gave its hand away even earlier during gratuitous backstory, where our fledgling magician Hero – a lowly peasant boy at the time – was smitten by a young upper class girl whom he is forcefully separated from due to bigotry of the caste system – and dramatic foreshadowing.

Despite its overarching inanity, Burger scored big with two of the greatest actors in cinema today: Edward Norton (as Eisenheim) and Paul Giamatti (as Chief Inspector Uhl). Even so, Norton does not quite fill the aura of the master magician; his eye is not striking enough and his brow is not brooding enough; Rufus Sewell (who plays Crown Prince Leopold) has more of a commanding magician’s look about him. Giamatti, on the other hand, burns down the screen with yet another chameleonic performance, astounding in its seamlessness and emphatic in its conflict – that of a man torn between supporting Eisenheim’s cause and advancing his own career by unlawfully harassing Eisenheim at the petulant Crown Prince’s behest.

Burger uses the passé technique of starting the story in the middle, telling the first half of the film in flashback and letting it “catch up with itself” in the middle, thereby distracting us more than misdirecting us, for there was no compelling reason to do so, other than to call attention to how smart he fancied himself for doing so.

Set in 1900 Vienna (with Philip Glass’s soundtrack unmistakably evoking the period) we discover that the Crown Prince’s betrothed, Duchess Sophie, (played with sensual style and bangin’ buttocks by Jessica Biel) is Eisenheim’s love of his youth; accidentally re-discovering each other during one of Eisenheim’s toast-of-the-town performances, she decides to flee the Prince and do the anonymous country girl shuffle with Eisenheim.

This sets in motion a chain of events that are not what they seem. At one point, the story seemed to thankfully violate Hollywood Romantic Protocol with the death of the Duchess – without the female love interest, the film would be forced to do something interesting through its third act – but, as we discover, this plot point is merely sleight of hand, all explained in a last-minute montage of crash-cuts straight out of OCEAN’S TWELVE. Plot twists serve a movie best when they reveal something startling, but this movie’s pretentiousness in speculating on Eisenheim’s communing with the dead or overthrowing an empire belies its prosaic outcome – monogamy.

Eisenheim’s stage tricks were all sleight-of-CGI, which was yet another distraction, as the illusions were too extreme. Since this tale is told through the eyes of Detective Uhl, Eisenheim could have just as easily presented “real” illusions, challenging enough to be considered supernatural by the virgin crowds of the day (as Arthur C. Clarke notes, “Any sufficiently advanced technology is indistinguishable from magic”) but in making them truly inexplicable (growing an orange tree in seconds, conjuring ghosts – attired in the couture of the period – walking through the audience), the movie leans on us to regard them as supernatural (as his audiences do). If so, then we must question the obvious: “Do clothes have souls too?” (Otherwise, why aren’t the ghosts naked? Does the supernatural world respect the propriety of Victorian-morals Europe and employ ectoplasmic clothing mimicry?)

The fact that this point is never raised with Eisenheim’s 1900’s audience may be construed as proof of their credulity or unsophistication – but think of all the years you in 2006 have been exposed to ghost stories and horror movies; ghosts are always wandering some Elizabethan hallway or haunting some teen model completely clothed – you’ve never considered this anomalous either! It is this unquestioning acceptance that religions rely on to keep humanity marginally retarded with fairy tales masquerading as history (but that’s another essay)…

Of course, the grandest illusion is that which our species perpetrates on itself – using “love” and “romance” to façade more earthy human proclivities. In a biological system geared towards the continuance of Life, procreation is nothing short of Life’s Prime Directive. Mating is good. The Villains are the hypocrisy of “love” and “romance.” THE ILLUSIONIST glorifies these Villains morbidly.

Sophie and Eisenheim delude themselves that their “love” for each other justifies their heinous framing of the Prince. Society seemingly advocates their premeditated crime, for when Inspector Uhl figures out the plot, rather than arrest Eisenheim for deviously driving a man to suicide, he simply laughs at Eisenheim’s ingenuity (which involved slipping someone a mickey, faking a death, public slander, planting evidence – all crimes, even in 1900 Vienna) because Eisenheim “did it for love” of course.

THE ILLUSIONIST worked its most egregious misdirection by invoking “love” (which in reality is nothing more than two evolved apes panting over each other’s genitals) and making felonies look like family entertainment.