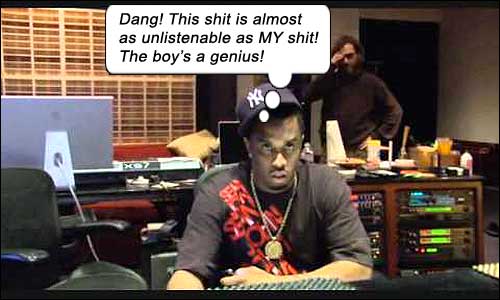 It’s the biggest Andy Kaufman joke ever played on the public, not played by Andy Kaufman.

Joaquin Phoenix takes Hollywood on a long ride in I’M STILL HERE, by proclaiming he is retiring from acting and starting a career in rap music. And Hollywood buys it.

It’s a strange animal, this film, because it was originally sold as a “documentary” – of Phoenix’s transition from actor to rapper – but we would realize in retrospect, it is actually a “mockumentary.” A lampooning of Hollywood’s nervous twitch; its desire to be hip and au courant, its peer pressure to be cynical and well-informed, and – ironically – being shown up as none of the above. As BORAT exposed the red neck of Middle America, I’M STILL HERE exposes the gossipy shallowness of the entertainment community and their readiness to believe any outlandish jape if shot through the prism of a documentary camera.

Co-written by Phoenix and Casey Affleck, and directed/shot by Affleck, there is some early inkling of the jive, as they both rumble over this idea on camera. We would only join the dots on this encounter after viewing the movie.

Looking as smelly as his unkempt beard, Joaquin (with Casey and camera hot on his heels) dives into the role of tortured artiste who seeks a new direction in his unfulfilled life, stepping out and rubbing shoulders with all the usual suspects – but wearing his new persona on his sleeve and taking them all along for the ride. To prove his bona fides as a rap artist, he takes the stage at rap events to incoherently blurt his wigga rhymes. In private moments to the camera, we hear he’s got some nominal poetic aptitude, so it’s only a case of securing a good producer to lay it down lucidly.

He seeks out Sean Combs (aka P. Diddy at this juncture), who graciously listens to his demos. When Phoenix asks to set some tracking dates, Combs deflates him, “Oh, you’re not ready to record with ME.”

Edward James Olmos philosophizes to the 35-year-old Phoenix that he is dissatisfied because he’s a drop of water; Ben Stiller goes Ben Stiller on Joaquin; rapper extraordinaire Mos Def gets told by Joaquin about his plans for an epic Bohemian Rhapsody of rap, and takes it seriously… And of course, we see the now-infamous David Letterman interview from early 2009, Joaquin by now unshaved for a year, fully into character as the distracted, incoherent, seemingly drug-addled tortured artiste. 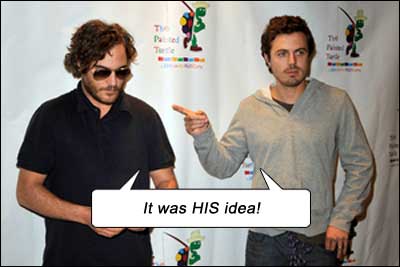 At the time, we all wondered, “Wha–?” But now, we see it as the brilliant social experiment it was. That beard and ‘tude earned him a meme.

Throughout, we hear the detractors – who were in actuality, correct – asking, “Is this a hoax?” Joaquin and his publicist quickly shoot down those rumors.

Joaquin Phoenix is such a great actor that this movie will make you hate him as a person if you come to it ignorant of its premise. As the snot-nosed, privileged, entitled child of an entertainment family, with his First World Problems (not finding fulfillment in a profession that is earning him millions), this is the most challenging, most profound, most Method role of his lifetime. He wrapped ALL the idiotic “entertainment media” around his thumb, getting them to waste resources “reporting” on his “rap career” and doing serious reviews of his supposedly sincere rap appearances. The self-confidence and big balls!

The overarching gag itself is priceless, but the movie of the gag is tiresome; I’M STILL HERE is just not compelling. If I had believed it was real – as maybe 50% of viewers do – my first reaction would have been: Joaquin has lost it; the title must be irony because he’s obviously Not All There anymore. And to start the journey, as Joaquin does, making a whining phone call to his agent from his backyard in the Hollywood Hills overlooking the lights of LA, would have simply made it too tiresome to bear. Even understanding it is a social experiment only raises the interest level a little: the commentary that Hollywood is a twitching powderkeg of vapid assholes is nothing new. What might have made this experiment properly damning to Hollywood’s cred is if Phoenix had released some of his music.

Phoenix’s music and lyrics are willfully just short of quality – although an untrained ear could never tell. Proof of my statement? In Phoenix’s final live hip-hop appearance to a packed, ecstasy-sodden crowd of millennials, witness the blank-faced broads that are actually dancing to his crap rap. Whether it’s the environment conducive to just swaying their bodies in rhythm to anything, or the fact that he’s a celebrity, or the fact that the ecstasy is kicking in, it makes no difference – Phoenix could have SOLD his shit to this undiscerning pack of lemmings. He ends his performance by diving into the crowd and attacking a heckler. But then, he HAD to cause a ruckus to put a button on this event and make people dislike him – at the very least, not to take him seriously – or those dumb broads would have been placing advance orders on his unrecorded CD!

If he had released that mythic album – and if people actually bought it – THAT would have been an even more biting indictment on consumer injudiciousness. And a middle finger to Hollywood and the recording industry as well, proving without a doubt that something insincere, if marketed well, is just as financially viable as any form of “serious” art.

Hmm. Insincere but marketed well. Hollywood in a nutshell. Andy Kaufman would be so proud.