He loves her, but she loves… her.

Following on the heels of BROKEBACK MOUNTAIN (Sep 2005) and TRANSAMERICA (Dec 2005) comes this syrupy, thoughtless, fad-awful debacle of lesbian love, IMAGINE ME AND YOU (the moanful title congruent with the lack of imagination displayed in the movie). 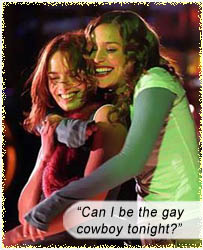 Luce’s experienced credo is “Never break up a couple” – which, in the parlance of this movie, means: As soon as your groin itches, Break Up A Couple.

Rachel is ostensibly straight – she’s got the slut ‘do, the-vagina-hugging jeans, the mod spinner bod, and the Jagger lips to sink the Bismarck – but instead of the story being one of self-discovery for her, she assuages her doubts on lesbianism with one literal roll in the hay. No sex. Just rolling around in a flower bed with Luce. On the strength of this incident, Rachel decides to leave Heck and the movie degenerates into the Lover Running Through Streets to stop the other one leaving.

Set in England, there are some good points to this insufferable travesty: director-writer Ol Parker gives the married couple a philandering friend, Coop (Darren Boyd) but doesn’t make him shallow – he’s almost the conscience of the film; also, heterosexual love is not disparaged as if “unnatural” (most gay-themed movies implicitly assert that GAYNESS is how the human race has survived this long on Earth and heterosexuality is the sexual deviation).

You know what’s really “deviant”? Romantic love. Movie’s climax (did I just say “climax”?) involves Luce and Rachel standing on the roofs of taxicabs declaring their love to the city streets to find each other in the crush of traffic. Give it two years, that exact same “romantic” behavior will earn a restraining order, the person performing the bent “romantic” rituals regarded as a stalker.

I hope nascent lesbians or even staid heteros don’t take any lessons from this film – although, we know that dreamy tweens will regard it as gospel. Rachel leaves her husband without any evidence other than one clothed tumble that she is actually attracted to another woman on a physical level. She stands atop a taxi declaring her lesbianism before she has had same-sex sex; she runs off with a lesbian to make love to her (we assume) for the rest of her life without ever knowing whether she’d even enjoy a muff in her mouth.

This plot in a hetero film would be ludicrous, even taking into account how rancid hetero romantic comedies are.

The title is more apt than it realizes – IMAGINE ME AND YOU – exactly. “Imagine.” Has no one considered that Rachel is simply bisexual and this lesbian fling is no more solid than Coop’s many beddings?; that her dreams of being “made for one another” are just another flight of fancy that young girls are prone to?; that after five years together, she’d be as sick of custard pie as (she thinks) she is sick of custard knob right now?

If all it takes to realize you’re playing for the other team is to Imagine, then all those gay-themed movies are right – we ARE all gay. It feels so… Natural….