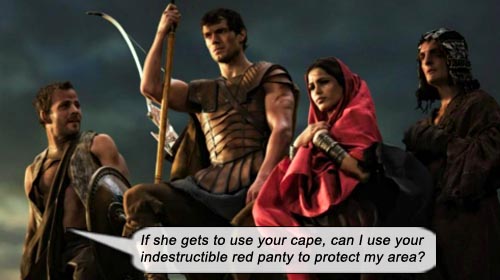 No matter what you may think about IMMORTALS as a grandiose movie, a confused mythological tale, or an action fantasy diversion — goddam, it looks good!

Call the filmstock developers! Someone spilled sepia tone and iron filings all over our print! And tell those guys to put some shirts on!

IMMORTALS follows ancient Greek mythological hero Theseus (shirtless Henry Cavill), on a legendary journey created by the screenwriters (Charley and Vlas Parlapanides), whom we presume haven’t read a Greek myth in their lives. The only vignette marginally resembling a Greek myth is the slaying of the Minotaur (the Minotaur not even a half-man half-bull, but an executioner with a kind of “crown-of-thorns” helmet shaped like a bull’s head). All the rest is off-the-cuff “mythology” about power-mad King Hyperion (even more shirtless Mickey Rourke) seeking an “Epirus Bow” that will help him rule the world. (Well, what else would one do with an Epirus Bow?)

And Theseus is there to lead Greece against him – with no shirts on.

As I watched IMMORTALS, I kept feeling like I should know this “Theseus” fella, but none of his situations or adventures were jogging my memory. He has a few scenes with John Hurt, who knows some of the old gods personally. Then that scene with the Minotaur, and my jaw dropped: It’s that Theseus?! Wasn’t he the half-son of Poseidon (here represented by a fey Teen Model) and a princess (here a peasant woman)? And isn’t Hyperion one of the 12 Titans, not a mortal king?…

If you’re here for the mythology, you’ve come to the wrong shirtless film. All I can say is, I enjoyed the movie as the extreme visual spectacle that it is, all mythological knowledge thrown out the window with the men’s shirts. (How long does it take to get your obliques that cut anyway?)

Stephen Dorff (shirtless to the max) gives Superman a run with his own obliques cut like bicycle seats on his hips. He’s scrapper Darius (–or something–who cares about the Greek names, right? They’re not actual characters from the Theseus myth anyway!). Frieda Pinto (SLUMDOG MILLIONAIRE) is a virgin oracle garbed from eyebrow to ankle in concealing oracle-wear – until Theseus saves her with the supercool glittering arrows from the magic Epirus Bow. Then it’s plunging neckline and thigh-high slit skirt. Oh, and sex (–now calm down, young lads; though she’s got a smokin’ bod, it’s useless. She’s a virgin! Ironically, God only knows how long it’s gonna take to convince her to GO GREEK!).

The portrayal of Zeus is telling of our times. Remember when the elder gods were always old men like Lawrence Olivier, or even Liam Neeson? Here, the father of the gods is dashing Luke Evans (none more shirtless), upgraded from playing Apollo in 2010’s CLASH OF THE TITANS. And all his divine chillun – Ares, Heracles, Poseidon and Athena – are Teen Models. Shirtless of course. Except for the goddess – the only person we really want to see shirtless. Isabel Lucas (as Athena) teases us as a naked stone woman, then drapes an annoying toga over herself as she assumes her immaculate human goddess form. She’s so perfect that I love her so much I hate her.

In the final battle against Hyperion, Theseus (whose British accent gets more Australian as the film wears on) rallies the retreating Greek army to turn and fight, by giving Inspirational Movie Speech No. 24, aka the “Blessed Are The Cheesemakers Speech” – in other words, how does anyone past the fifth row hear him? “We must stand and fight!”… “Did he say ‘Blessed are the cheesemakers’?” “Well, obviously it’s not meant to be taken literally. It refers to any manufacturers of dairy products.”

Director Tarsem Singh has studied Zack Snyder’s 300 like a man possessed, copycatting that scintillating balletic violence; I especially like the representation of gods killing faster than the eye can see, as they ravage at normal speed through a forest of assailants that are being mutilated in slow motion.

When everyone is dying at the hands of the Titans (which are nameless stone-textured soldiers that scuttle around like bestial insects), Zeus decides to turn to magic – a literal deus ex machina. The eternal question: why didn’t he use magic in the first place and save us all that time looking for our shirts?